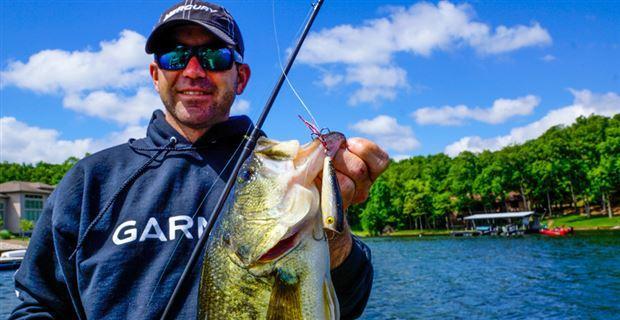 After the spawn is over and water temperatures rise, bass tend to move away from the bank into deeper water for the summer months. They focus less on shallow cover and more on chasing baitfish. Because of this, on many clearwater highland reservoirs, bass will oftentimes suspend in the water column, making them difficult to catch on traditional tackle.

Elite Series pro and Lake of the Ozarks native Casey Scanlon reaches for his topwater box when fishing for suspending bass this time of year. A topwater can draw fish from a long distance in clear water and also catch bigger, predatory bass as a result.

To be effective at catching suspended bass on topwaters, Scanlon recommends asking yourself the following 4 questions: 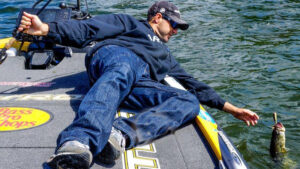 DETERMINE IF FISH ARE SUSPENDING

It isn’t always easy to tell if the bass are suspended, so Scanlon pays close attention to his Garmin electronics to note where the baitfish are and if he is marking arches off of the bottom. Generally, he will already be fishing a bottom-related lure such as a jig or shaky head on the offshore structure on which bass tend to suspend.

When he marks these fish off the bottom or sees baitfish activity, he will start chucking his topwaters in the same area. One more thing that he noted which is an indicator of suspending activity is when he gets bites on his jig or other bottom bait while reeling it back to the boat.

“A lot of times, the bass will tell you what they are doing just by the way they bite,” Scanlon said. “If I either get bit as I reel back, or have a follower chase it to the boat, I know that the bass are suspended and I should likely switch baits.” 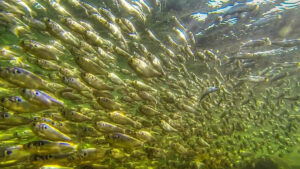 At the end of the day, the bass will go where the food goes, so there is no “perfect” structure that will always hold them.

“Some of the best places to look for bass this time of year are main-lake and secondary points, boat docks over deep water, standing timber and deep brush piles,” Scanlon said. “It is important to have a channel swing close to these locations, which will bring in more baitfish.”

While these are some of the most obvious places to look, Scanlon also notes that the bass can be found almost anywhere where there are large amounts of baitfish, such as deep guts in the middle of creeks, flats, or any other good ambush points. 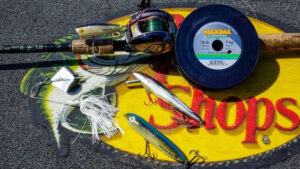 Depending on the lake, bass will suspend over a couple feet of water, a couple hundred feet of water, or anywhere in between. One of the most important factors of selecting a topwater to entice these feeding bass is what Scanlon calls “drawing power.”

This refers to a lure’s ability to bring a bass up to the surface to inspect and hopefully attack the topwater plug.

“From my experience, the best drawing power comes from large, fast moving baits which make a lot of noise,” said Scanlon. “I love to work my baits very fast and cover a lot of water. The clearer the water, the bigger the bait, and the faster I will work it.”

While almost any topwater can work, Scanlon opts for big buzzbaits, poppers, spooks, and a Cotton Cordell Redfin earlier in the topwater season. (The Redfin is the one exception to his speedy retrieve, which he will reel slowly and steadily)

Buzzbait: For the buzzbaits, Scanlon chooses a Luck “E” Strike Buzzbait in either white or black. He opts for 40- or 50-pound Maxima braided line on a high speed Johnny Morris Signature Series reel. For a rod, he will use a 7-foot, 6-inch medium-heavy power RaZr Rod to make long casts.

Poppers and Spooks: When using treble hooked topwaters, he opts for chrome and shad colored baits of different brands. Pictured is an old Rebel Pop-R that Scanlon loves to use due to its unique ability to walk effectively. He throws these plugs on 15- to 20-pound Maxima Ultragreen Monofilament, spooled on the same high speed Johnny Morris reel. For these baits, he chooses a 7-foot medium power RaZr Rod, to make sure he doesn’t pull the hooks out and to allow more accurate casts. 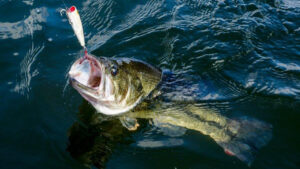 If the bass are biting a topwater and getting hooked, you’re on the right pattern. But you might find some bass that come swirl and swipe at the baits and never fully commit or break the surface. While topwaters are usually a good choice for suspended bass, there are times that they just won’t come up and bite them. When this is the case, Scanlon has to resort to topwater backups. Lures such as swimbaits, lipless crankbaits, and jigs are popular choices among many. Scanlon likes all of these options, but his number one backup is a Luck “E” Strike Rick Clunn RC STX jerkbait.

“No matter where I go, I can always catch fish on this lure,” Scanlon said. “During the summer, I will work it very fast and erratic and will usually catch the bass that won’t commit to topwaters.”

Scanlon also noted that he likes to stroke a 3/4-ounce Bass Kandi Baits Flipping Jig high off the bottom, which is always a good option for the hot summer months.

While many anglers think they are doomed when they can’t catch bass off the bottom, it isn’t as hard as you think if you cover water and stay confident. Throwing topwaters all day can give you some of the most fun of the year and result it some big catches even in the hottest parts of the day. There really is nothing like seeing a quality bass blow up on your plug halfway back to the boat!