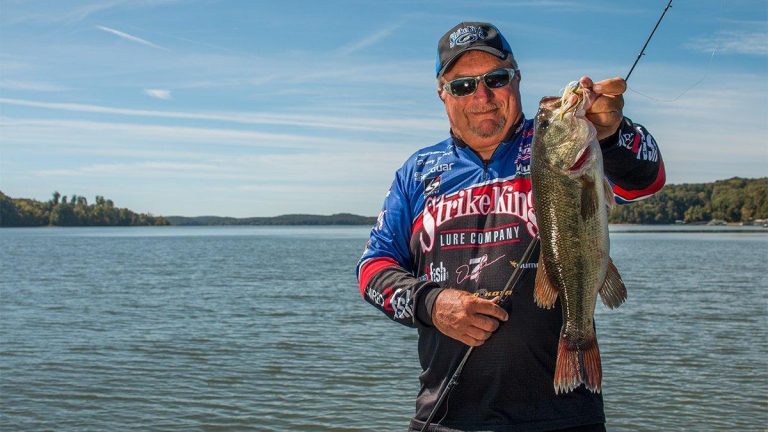 If you’ve been trading in your rods and reels for the comfort of air conditioning lately, you’re not alone. Not only does the excessive heat have humans in a funk; the bass aren’t too happy about it either. Couple these conditions with the summer-long fishing pressure and yes—the cool breeze of the Great Indoors doesn’t sound too shabby.

According to bass fishing legend Denny Brauer, however, this is actually a perfect time to wreak havoc on your local bass. With the help of a swim jig, you’re bound to have some incredible days on the water, despite the uncomfortable conditions.

There are several key factors we must understand before beginning our summer swim jig assault.

The shallows are playing a role again

Fishermen are constantly bombared by talk of deep structure and cover this time of year. When the bass are done spawning, we expect them to head straight to their summertime haunts and stay there until the first cool nights of the fall. But it’s not always that simple.

Take a look at how John Cox won the 2016 Forrest Wood Cup on Wheeler Lake. While some anglers were able to enjoy limited success targeting offshore bass, Cox found the most consistent bite targeting backwater bass in extremely shallow water.

This isn’t surprising, according to Brauer.

“Late-summer bass will, without a doubt, make their way back to the shallows,” Brauer said. “The oxygen levels are quickly depleting at the deeper depths and the bass have a hard time tolerating it. In addition, shallow cover is becoming much more plentiful this time of year. There’s more vegetation growth which results in three very important things: Shade, ambush points and bluegill.”

The importance of shallow bluegill should never be overlooked. Instead of exerting a substantial amount of energy to chase small baitfish, big bass prefer to utilize their energy in a more efficient manner. Bluegill are the proverbial low-hanging fruit right now and make no mistake about it—the bass are fully aware.

“If you have a lake with boat docks, you’ll likely find a lot of bluegill hanging around ‘em,” Brauer said. “The shade is the number one key when you’re looking for bluegill, so it’s also a good idea to target overhanging trees, shallow hydrilla clumps and laydowns. If you see bluegill swimming around, you’re in the right area. The bass aren’t far away.” 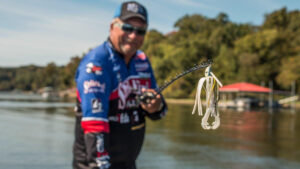 Even with a shallow population of bluegill present, summertime bass aren’t necessarily going to jump into your boat; it takes a lot of elimination and efficiency is of the utmost importance. That’s exactly why the swim jig is such a big-time producer.

“This is a bait that allows you to cover a bunch of water quickly,” Brauer said. “You might burn down hundreds of yards of bank without a bite before running into a wad of nice bass, so it’s important to keep moving. It fishes excellently around shallow cover with very few snags.”

In addition to its weedless properties, a swim jig is an outstanding selection in clear water. Late-summer droughts often lead to ultra-clear water around the country and unlike many fast-moving lures, swim jigs are quite subtle even when fished aggressively.

“This is a very sight-oriented presentation,” Brauer said. “Swim jigs emit minimal pressure waves in the water, so they’re very natural-looking to wary bass. There are no flashy blades or rattles, so this gives you a great opportunity to entice some big-time reaction bites while keeping a subtle, non-threatening profile.”

“The wind is your friend.”

We’ve all heard the popular cliché until we’re blue in the face. The presence of wind, however, is perhaps never more important than it is right now. The water is hot and stagnant, so any surface disturbance is a major bonus.

“Windblown areas this time of year are very difficult to beat,” Brauer said. “The areas that get more wind will have better oxygen levels which, in turn, means more active bass. I like to find small points—both secondary and primary—with some sort of cover whether it’s vegetation, stumps, rocks or bushes. These areas give bass an opportunity to feed on the point throughout the day and suspend in deeper water when they’re inactive. Even if bass is living shallow, they prefer to have deep water somewhere nearby. It’s a comfort thing, in my opinion.”

Although Brauer has had consistent success fishing a swim jig around isolated hydrilla clumps, rock transitions, flooded bushes and laydowns, he believes there’s one common denominator to it all: His retrieve.

As with any reaction lure, a basic cast-and-wind swim jig retrieve will result in moderate success. It’s easy to go into robot mode after a long stretch without bites, but incorporating erratic action into your retrieve pays huge dividends.

“I fish a swim jig very similarly to a spinnerbait,” Brauer said. “Right when the swim jig hits the water, I’ll engage my reel and keep the swim jig about a foot underneath the surface. Instead of simply reeling it back to the boat, I’ll make it jump, twitch and pop with my rod tip. Everytime that jig comes by a piece of cover, make it jump a couple of times. Even if a bass isn’t actively feeding, that erratic action preys on its predatory instincts and it can’t help but go on the attack.”

Bites are fairly unmistakable with this technique. Two things will happen: You’ll feel a hard bump or you’ll see the fish swirl on your swim jig. To increase his hookup ratio, Brauer keeps his rod tip down and to the side throughout his retrieve in order to give himself room to execute a stern hookset.

According to Brauer, two sizes will cover every situation you’ll encounter on the water.

“I love the 3/8-ounce Strike King Hack Attack Heavy Cover Swim Jig fished on 20-pound Seaguar Tatsu fluorocarbon over everything else,” Brauer said. “It’s heavy enough so you can fish it where you need to and you don’t have to power reel to keep it up in the water column. About 80 percent of the time, it’s what I’ll throw. If I’m trying to swim it a bit deeper—say, in 5 or 6 feet of water—I’ll go with the 1/2-ounce. That’s honestly as complicated as I let it get.”

The soft-plastic trailer plays as much of a role as the swim jig itself. Similar to his size selection process, Brauer tries to simplify his trailers as much as possible.

“I use a Baby Rage Craw a lot,” Brauer said. “Don’t let the name fool you; it can look like a myriad of different forage species. A white-colored Baby Rage Craw makes your swim jig look just like a shad and the green pumpkin color imitates both a bluegill and crawfish very well.”

He’s also been experimenting with another trailer lately with which he’s caught a lot of great bass. The powerful boot-shaped tail of the Rage Swimmer incorporates a lot of side-to-side action into the swim jig and creates a bit more disturbance in off-colored water.

“A lot of people don’t realize that the direction of the boot tail makes a big difference,” Brauer said. “It it’s pointing upward, the swim jig is pushed down which makes it a bit easier to fish in that 5 to 6-foot depth range. When the tail is pointing down, the swim jig will rise a bit more throughout the retrieve, allowing you to wake the bait right underneath the surface.”

The next time you decide to brave the heat for a few hours of late-summer fishing, do yourself a favor and pack some of your favorite swim jigs. If you make an effort to hit areas similar to the ones Brauer suggests, there’s a great chance you’ll have one of your best days of the entire summer.