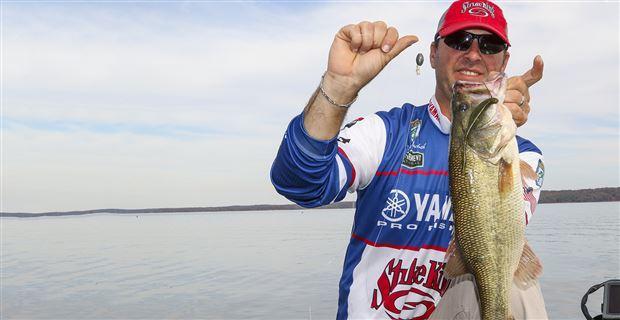 The Carolina rig has proven itself as a bass fishing catcher, but Todd Faircloth is very particular about the rigging. Essentially, the Texas bass fishing pro foregoes the traditional line-swivel-leader setup.

Instead he uses Carolina Keepers in place of a swivel.

One knot at the hook versus two on the swivel and one at the hook reduces the potential failure points.

With a traditional Carolina rig where the weight is behind the swivel, it has no freedom to move.

Rigging is simple with Carolina Keepers. Squeeze the keeper with pliers to open, insert the line and release to cinch in place. Sliding the keeper up and down the line while squeezed instantly adjusts leader length. 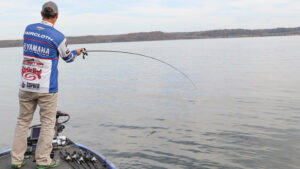 Partial to a 3/0 round-bend hook for most of his Carolina rig needs, Faircloth’s leader averages 2 to 3 feet, but he’ll occasionally adjust according to scenarios.

“There are times when a shorter leader is best, especially if you’re around thicker cover and sometimes you need a longer leader, like when you’re fishing inside or outside grass lines where you want more separation and bait freedom,” Faircloth said.

“I also like to use a longer leader when I’m using a Strike King Caffeine shad, where I’m trying to imitate a shad or baitfish. A longer leader allows it to drift around a little more. It’s really simple to adjust with the Carolina Keepers.”

Faircloth uses one Carolina Keeper for weights under 1/2 ounce and two for larger weights.

“Sometimes it will slip, especially if you’re really bombing it out there, so I’ll put two on there with larger weights so I don’t have to worry about it,” Faircloth said.

Faircloth doesn’t care much for beads, but if you want that traditional C-rig look and sound, add your beads between the weight and the Carolina Keepers.