When Ozarks pro Tom Murphy is trying to reach deep fish, one of his favorite tricks is to dig around the bottom and stir up an unmissable commotion with a big Scrounger head. A seasonally diverse tactic, Murphy’s plan is all about generous profiles and attention-grabbing action.

For fall-winter, when fish feed primarily on baitfish, particularly the jumbo gizzard shad, the Missouri angler finds that working a big 3/4- to 1-ounce Scrounger with a 5 to 6 1/2-inch swimbait along steeper rock banks can be money.

Murphy favors the Luck “E” Strike Scrounger, but he’s picky on his bill style. He won’t go any smaller than the medium model, but the longer bill is his preference because more lip means a wider wobble and that’s what you need for imitating big gizzard shad. 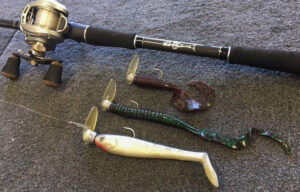 “The beauty of that big Scrounger head is that it allows you to work your bait in deep water and stay in contact with your bait,” Murphy said.

Murphy also keeps his big scrounger handy for the warm season when he’ll temp summertime ledge fish with the same size scrounger with either the swimbait or a big worm; anything from 10 to 14 inches. The latter’s his choice when the fish are feeding on the bottom for crawfish, while the swimbait does a better job of enticing the fish chasing shad.

“You can stroke it like you do a big spoon, or work it like a big worm; swimming, bumping, dragging it as it goes from shallow water off the ledge and falls about 5 feet to the next little ledge,” he said. “You can bring it all the way out into the deeper water and they’ll hit it that way also.”

Murphy said he’ll use his big scrounger/swimbait setup as his primary bait when he’s confident the fish are actively feeding on shad. Otherwise, it’s a great follow up to a deep diving crankbait or a hair jig. Similarly, a Scrounger with a big worm serves as a convincing encore to stroking a jig.

Murphy throws his big scroungers on 7-foot, 6-inch heavy rods with lots of backbone and a little bit of tip — something like you’d use to fling Alabama rigs —and a high-speed reel to move the bait quickly when needed and then take up line fast enough to catch up to each bite. His line choice is always braid.

If fish are short striking a scrounger paired with a big swimbait, add a stinger harness to the Scrounger head. 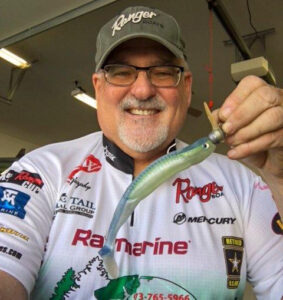