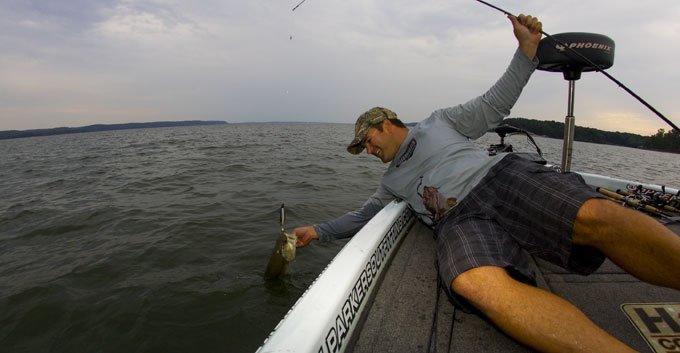 The stories of how the bass fishing spoon came into existence are many, but the one I like to believe is about an old timer fishing out of an old wooden boat dunking minnows and earthworms for bass or whatever would bite. The action was slow, so he popped open a small metal container of pudding. This was long before the days of plastic spoons. He reached into his lunch box and pulled out his metal spoon. As he was getting ready to take a bite, he saw his rod tip move. He reached to grab the rod to set the hook. When he did, his spoon fell overboard. He leaned over the side to try to grab it. As he watched it flutter away, a big bass swirled on it and ate the spoon.

Legend has it that he then went home and cut the handles off his wife’s collection of eating utensils and drilled holes in them to attach hooks. The rest, as they say, is history. So the birth of spoons, if the legend is accurate, was a big flutter spoon worked vertically for big bass.

My how things change … and don’t change for that matter in bass fishing.

The big spoon craze hit a bunch of lakes in Texas and the south about 5 years ago. Most of us in the industry though really point to Kelly Jordon exposing its effectiveness on an episode of Ultimate Match Fishing on Kentucky Lake. In that episode, he broke out this big spoon weighing 1.5 ounces. The beauty of his spoon was he could cast it a mile and keep off the spot to keep his competitor away from the fish.

He dominated his competition with this crazy looking big spoon that looked more like a King Salmon trolling bait on the Great Lakes than a bass fishing casting tool. I can remember where I was when I first saw the big spoon. I was sitting in FLW Tour angler Vic Vatalaro’s family room watching the show on DVR while on assignment at Lake Erie.

I can remember being blown away by that new technique and is probably why that memory is seared into my brain. It rarely happens where a new bait and technique wows us in bass fishing anymore. The Senko did it, the drop shot did it, and now the big spoon has done it.

But for most, the big spoon is something they’d never even consider trying. And that’s probably accurate for a lot of fisheries. But if you’re confident your fishery has fish weighing more than 3 pounds, and the fish like to get competitive in and around deep water, say 10-30 feet, then there is a good chance you can find a good spoon bite. I’ve had guys call me to make them up spoons to fish in local ponds and sent me pictures back of 7-10 pounders they caught on them.

To the point, they are not a gimmick. They catch bass, often the biggest in a school.

Bassmaster Elite Series pro Ben Parker has spent the last three years really experimenting and refining his spoon technique on places like Kentucky Lake, Pickwick Lake, Guntersville and on the tour. Whenever the fish start grouping up away from the banks, he has a big spoon tied on one of his heavy-power Grim Reaper rods.

“I love to throw a spoon,” Parker said. “In fact when the fish are schooling, it’s the first lure I pick up because I think often your best chance to catch a big fish in a school is on the first couple of casts and the big flutter spoon does that.”

We spent the day with Parker discussing what he’s learned and what a guy needs to know to effectively fish a spoon to catch bass. He also offered up some things he’s seen folks do that makes spoon fishing a lot harder than it has to be.

“You need the right equipment,” Parker said. “That has more to do with fishing effectively than how you work it in my opinion. If you have too soft a rod, you’re just going to get worn out and not be effective in fishing it. Same thing happens with too light a line.”

Parker starts with a 7-foot, 6-inch heavy power rod. Yet his tip is more of a moderate to mod-fast action. That tip gives him a lot of control on the cast of the spoon, and that softness just at the tip can help keep a big fish buttoned up on a fight as it flexes a little more than a more “broom-stick” flipping stick does. He uses a Grim Reaper rod because of that softer tip and strong back bone for good hooksets on a long cast.

Parker is always experimenting with lines, leaders, hooks and more with his spoons. On our day he was actually fishing the spoon with braid tied to a swivel with a 2-foot, 25-pound fluorocarbon leader. On that leader was another hook on a split ring that was free to slide up and down the leader. Then of course the spoon was attached to the end of his line.

He has long used 20-pound fluorocarbon for his spoon fishing, but he likes the way the big braid has handled as well. That “stinger” hook that is running up and down on that leader has some homemade flashabou tied to it, so his offering looks like a big baitfish chasing a smaller baitfish. The beauty of the rig is Parker catches a LOT of doubles. In fact while filming a show earlier this year, Parker caught a 4-pounder on the stinger hook and a 6-pounder on the spoon on film.

“You have to use 25-pound on that leader, and if you catch some fish on the stinger, be ready to replace that leader,” Parker said. “You could just attach the second hook to the spoon, but I like that when I jerk the spoon, the hook and spoon separate. Plus, I think if you have followers, the floating stinger could catch one of those followers.” 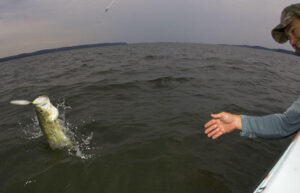 Parker uses the Joe Spaits spoon out of Lake Fork in Texas. Spaits spoon is the one that Kelly Jordon used and is often credited for the start of the big spoon craze although many companies make them now.

He switches the hooks out for No. 1 Gamakatsu Round Bend treble hooks though. He’s tried other hooks like the Mustad KVD Elite Triple Grips and likes those when the fish are really eating the spoon. But finds a lot of fish just slap at a spoon and feel like he gets a better hookset if the hook points are a little more open than an EWG.

Once he’s got his tackle right, he’ll start scanning for schools of bass on offshore creek channels, river channels, humps, points and bars in the mouths of bays. Once he locates a school of fish he’ll back off the fish and make long casts. As the bait falls, he’ll continually feed it line so it falls down through the school. Watching the line is key when fishing the big spoon because the majority of bites will happen as the lure is falling, and you’ll just see your line jump real quick.

Letting the spoon fall on controlled slack line is key. You don’t want the spool to pendulum back towards you because it won’t flutter if there is too much tension on the line. You want it to flutter down through the fish. To accomplish that, lay slack on the water in a nice loose bow of the line, following it down with your rod tip and being ready to take up slack in a hurry. A high-speed reel like a 7:1 reel can really make a difference. Don’t leave too much slack, or you’ll never get a hookset on the fish.

If the spoon makes it to the bottom without getting bit, Parker will start with a variety of retrieves. From big rapid rips off the bottom to small short pops of the rod tip, Parker will experiment with retrieves. 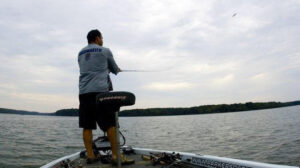 Parker has found that when the bass suspend off the edges of structure over open water, a big spoon can catch them. You can count it down into the school and then hop, reel and dance it in their face. Sometimes a big rip off the bottom will get those suspended fish to move down closer.

I personally love throwing a big spoon. I’ve caught some great bass and a lot of fish on it in the last few years, and it’s not hard to see why Parker has fallen in love with the big spoon for bass fishing. We took a sneak peek at his new video Bass under Glass: Unlocking Mega Schools. In this video, he whacks a bunch of nice bass on the big spoon, and you can really get a good look at how he finds the schools and fishes the big spoon. That video should be available on his website, eBay, Amazon and tackle retailers very soon. 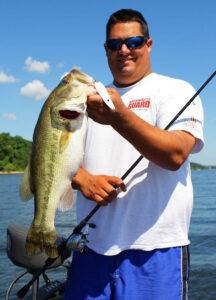