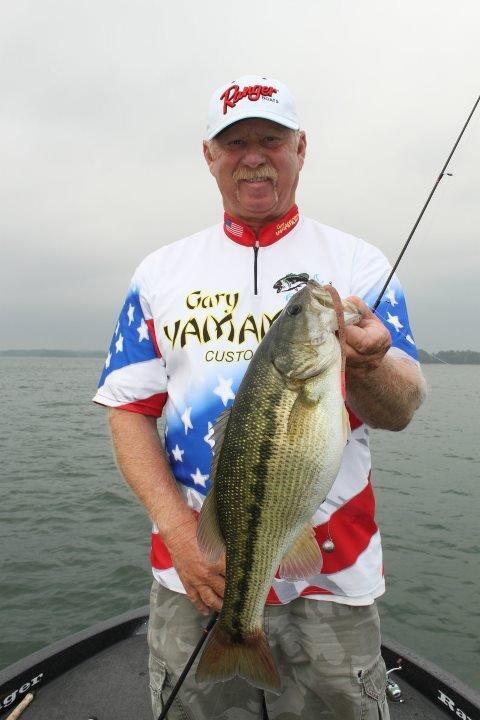 In years passed, not a lot of bass fishing happened at the bottom of a 35-foot water column. There just weren’t many baits capable of reaching such depths and fewer anglers who had the confidence to search that far below. The recent advances in sonar technology, however, and the success of the drop shot bass fishing technique in the last 10 years have leveled the playing field a bit. Deep water dwelling bass run the risk of more sore lips now than ever before.

That being said, it’s still not as easy as flipping the bail and letting your bait drop. Unfortunately, that basic idea is all we see many times when a photo or video is shot of an angler capitalizing on this still intimidating method. Do you ever wish you could pick the brain of a true drop-shot professional? Well Tom Mann Jr. opened his to us out on Lake Lanier and showed us exactly how to “pluck” giant spots off deep cover in the late summer months.

Fishing up to 45 feet deep in and around standing timber and brush piles may not be your forte, but it is something that Tom has gotten down to a science. Although you may not have the wealth of local knowledge that he has, there are ways to help you reach the potential of your areas that fit the bill.

Drop shotting starts for Tom in the end of June on Lanier, when the fish start relating to the bottom. Early in the summer, he’ll work areas in as little as 20 feet of water gradually moving deeper along with the fish until he’s fishing in 50 feet at the end of the summer.

A mistake people make when targeting deep fish in clear water is positioning the boat directly over top of the cover. Mann admits he’ll idle over brush when it’s more than 35 feet deep but the boat will spook fish in shallower water, even on the trolling motor. It’s best to approach shallower cover slowly and fish a circle around it first.

The better fish are often around the cover and not actually in it. Pitching the drop shot 10 or 15 feet from the boat when it’s still 20 or 25 feet from the cover is best. This allows the bait to fall vertically through the potential strike zone without having the boat directly overhead. If the drop shot or graph doesn’t reveal any bass around the cover, it’s time to reposition.

Moving the boat directly over the cover creates a problem however. The strong spots of Lake Lanier, especially the bigger ones, have a tendency to tangle up in the cover. This is why Mann uses 10-pound Suffix 832 braid and a 10-pound Suffix Castable Fluorocarbon leader. Even though Lanier is fairly clear, he can get away with the 10-pound leader because he is targeting fish so deep. And it is a must when removing the bass from cover.

If the bass does bury itself in the cover the best thing to do is just keep a little pressure on it. Let the fish work its way out instead of trying to pull it out.

“I just hold him and let him wiggle and wiggle. He’ll wiggle his way to the next limb and right on out of there. I rarely loose one.”

Still, fishing in heavy cover like this will eventually result in a hang up. To counter this he pre-rigs 2 to 4 rods before he heads to the lake. If the bait gets hung, he typically has to break it off and rigging on the water, especially in a tournament situation, is a waste of time.

He’ll tie a double uni-knot from his main line to a 5- or 6-foot leader, leaving a 10- to 12-inch section to attach his weight below the hook. His hook is attached using a Trilene Knot that he starts by going through the back of the hook first and finishes by running his tag end back through the eye so that his hook will stand out.

“When I’m drop shotting this deep, it’s hard to get a hook in them. So I like to use a skinny worm and bring the hook all the way through and then pull it back through.” 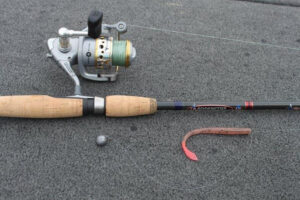 Tom never goes lower than a 1/4 ounce and prefers the heavier weight because it must stay in contact with the bottom for the worm to get bit. Even if he sees a bass on the graph suspended he will drop his bait all the way to the bottom. The bass see it go by and follow it to the bottom where he then lures them in by “slapping” his line.

“As soon as I feel the tension of the weight I’ll drop my rod and slap it again.”

He’ll work it in one place like that for 10 or 15 seconds never lifting the weight of the bottom and then jump it about 5 or 6 feet and repeat the process.

“A lot of times he’ll be down there just looking at it, and when I jump it like that and let it back down on the bottom and start shaking it, he’ll have it,” Mann said. “When they are not feeding, that will activate them.”

Tom uses a prototype 7-foot spinning rod that is being built by American Rod Smith and an Ardent S2500 spinning reel. A limber-tipped rod is preferable with a little backbone near the handle. This setup allows the fish to wear itself down, resulting in more landed bass. Braided line is used to make up for the loss in sensitivity. Between the braid and soft tip, Mann is able to feel the fish before the fish feels him, and that is key to hooking them in deep water. In addition the lack of memory, the braid cuts down on line twist making it the perfect all around main line.

When he patterns fish with a drop shot, most of his day is spent staring in one of two locations. Either ahead at his Raymarine graph on the console or down at his graph on the front deck. He prefers a tight cone angle on his graph in the front of the boat as opposed to a wider one on the back.

This allows him to scan a larger area on the big motor and then pinpoint the fish up front. His setup only shows a 3- to 5-foot radius beneath the trolling motor and, although he doesn’t see as much with this, he can almost always catch a fish that he spots on his graph.

“A lot of people like a wider cone angle because they can see more, but I don’t want to see a fish if he’s 10 feet in front of me or 10 feet to the left or right,” Mann said. “If I run over one he’s right there, and I know it’s going to drop right on his head.”

He also uses the graph to find his preferred bait when drop-shotting – blueback herring. This is the best bait because they run close to the bottom and hang tight to cover narrowing the strike zone.

Herring run inline, one in front of the other, helping to distinguish themselves from the shad that group up in a ball and typically position themselves a little higher in the water column. The best case scenario to appear on the graph is a dark blur a couple feet off bottom about 10 to 20 feet before the boat reaches the cover.

“If you see that and can find an arc from a bass off to the side of the brush or timber, it’s like plucking apples off a tree,” Mann said.

Hopefully these drop shot tips from a Lake Lanier legend will help you make the most out of your next bass fishing trip. Just remember when first hookup, take your time getting them out and let the fish fight the rod. Use braid for sensitivity and strength and modify your graph so you know exactly what you are looking at and where it is. Then flip the bail and let your bait drop for some easy and rewarding bass fishing.