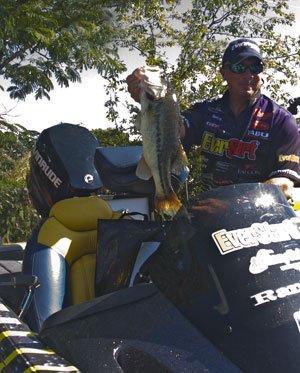 How would you like to load the boat with 3- to 6-pound largemouth the next time your bass fishing, in less than 2 feet of water, all crushing a prop bait on the surface? Yeah, you, me and every other fisherman that has ever fished for bass. Unfortunately, clichÃ© as it is, saying it is a lot easier than doing it.

By far the predominate pattern of the 2011 Forrest Wood Cup on Lake Ouachita was a throwback from last season’s FLW Tour event on the same reservoir. Chasing down “wolf packs” of bass with topwaters was the obvious focus of nearly every angler in the field, and EverStart pro Randall Tharp did it better than 57 of his colleagues.

Tharp locked down the runner-up spot by taking advantage of the bountiful bass that roam the crystal clear shoreline of Lake Ouachita. Though Scott Martin won the Cup fishing deep, there were a few key elements to Tharp’s pattern that made him the best of the rest in the shallows – location, approach and presentation.

“No place have I ever fished where I figured roaming fish out so well,” Tharp said.

The first part of catching anything is knowing where to look. For Tharp last week, location meant four things: bream beds, shad, timber and funnels or saddles.

“I would look for areas of the lake that were nothing but tapering bank for 2 or 3 miles,” Tharp said when asked what made his three or four locations special. “Then there would be a saddle or funnel.”

This saddle is a place where the main lake funnels between an island and the mainland. The saddle is the shallow spot between the two points. Tharp could barely get his boat through these saddles, at times having to use his push pole.

“I was sitting in one of these saddles one day, and the water beneath me turned black with bass,” he said.

In awe, Tharp watched as 20 to 25 bass 3 to 5 pounds rushed over the saddle and into the depression behind it.

“I never caught a fish out of that school, but that showed me how many are out there.”

He explained that though bream beds were present along the main shoreline, the bass wouldn’t stop on them. Instead they would make their way to these openings and then use them to corral the bait. The fish would follow shad over the saddles and into these areas where they then disperse on the bream beds. The bream beds that set up the best were the ones right inside the saddles.

Here the pack hunts as a unit, eerily reminiscent of a group of wolves circling their prey and then collapsing from all sides. Tharp commented on this moment of attack.

“I saw them knock bluegill all the way on the bank several times,” he said. “If you could get the bait in there while they were doing that, they would eat it. If you missed it by 10 seconds, man, they were done.”

Even though the bream beds were his main focus, shad were an integral element in the composition of his honey holes. Not only did the shad bring the wolf packs in but they also drew them up on occasion, each day resulting in one weigh-in fish.

“I never went into an area targeting schoolers,” Tharp said. “I would go in to fish the bream beds but if the fish came up and started schooling I would try to take advantage of that.”

The locations frequented by Tharp also had standing timber. Unfortunately that only cuts the 40,000 acres that make up Lake Ouachita in half, leaving a lot of similar water. The timber is important because that’s where they live when they’re not feeding. But he never caught a fish targeting it.. In fact he would intentionally split the trees with his bait as evenly as possible to give him the best chance of landing a fish regardless of the direction from which the strike came.

The wolf packs are roamers, and that’s all there is in the lake according to Tharp. He didn’t slow down to target stumps or laydowns along the banks. When bass are feeding, they relate to bait and nothing else. If a bite came in the timber, it wasn’t because the bass was using it as an ambush point, rather that’s where the shad were at the time, so too was the bass.

Tharp’s approach on how to target roamers is another aspect he doesn’t take lightly. The water is so clear in many of these areas, the bass are basically looking through air. Like a stealthy sniper, he hunts. He wore a blue shirt on days 1 and 2 to blend in with the sky. If he saw a fish he would crouch down low in the boat.

Like a refined art, Tharp makes himself as invisible as possible when hunting these packs. He doesn’t bump around in the boat. He uses his Power-poles to position the boat to where he can make repeated casts at the same beds. When the water was more than 8 feet deep, he would perch one foot on a stump and work a bream bed over to keep front bumping the trolling motor.

As meticulous as he may be though, some fish just won’t eat. The catch is knowing which ones are worth the time.

“I saw two 6-pounders on the final day, the biggest fish I saw the whole time, but they wouldn’t bite,” Tharp said.

The clear water unfortunately reveals what many anglers would rather not see – suspended, non-active bass.

Although the term Wolf-Pack howls aggression, it can be a little misleading. The bass that make up these bait busting gangs are extremely docile, skittish and picky when they aren’t actively feeding. In the words of Tharp, “when they’re eating, they’re stupid. But when they’re not, they are pretty darn smart.” 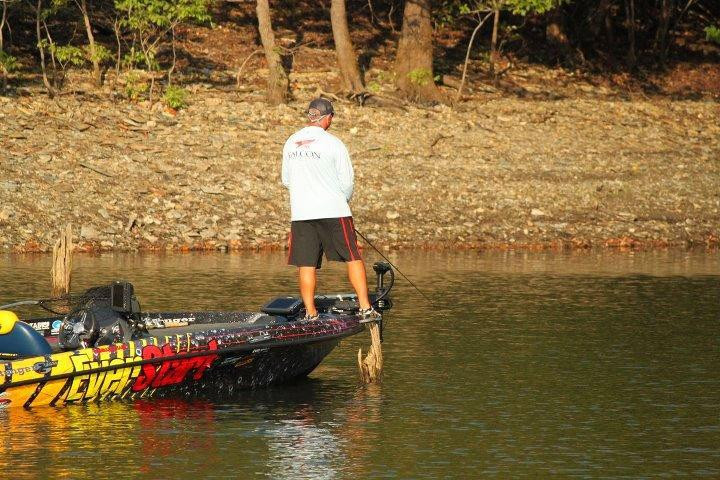 The Brian’s Prop Bee III was the golden ticket that carried Tharp through to the end.

“I did try a lot of different things in practice, but that topwater would get the better fish. The noise of that prop bait just triggers them to bite it.”

Tharp admitted that he threw a lot of other stuff in practice and even tried a wacky worm but just didn’t get enough bites to justify slowing down. Instead he would make long casts and try to come by a fish before either party caught a glimpse of the other.

Braid is key when stalking wolf packs with topwaters. Of the nine other pros in the top 10, he believes he was the only one to throw his topwater exclusively on braid, with the exception of a monofilament leader. Thirty-pound test Power Pro and a Gama 17-pound co-polymer monofilament green leader is his choice for the wolf packs.

“I was able to throw the bait farther and work the bait better on the end of a long cast,” he said. “I caught a 5-pounder on the final day and was able to horse him in through 20 stumps on either side.”

There is the school of thought that bass will tear off topwaters thrown on braid more often than monofilament.

“The braid may have cost me a fish or two but I definitely think it helped me catch a lot more,” he said. 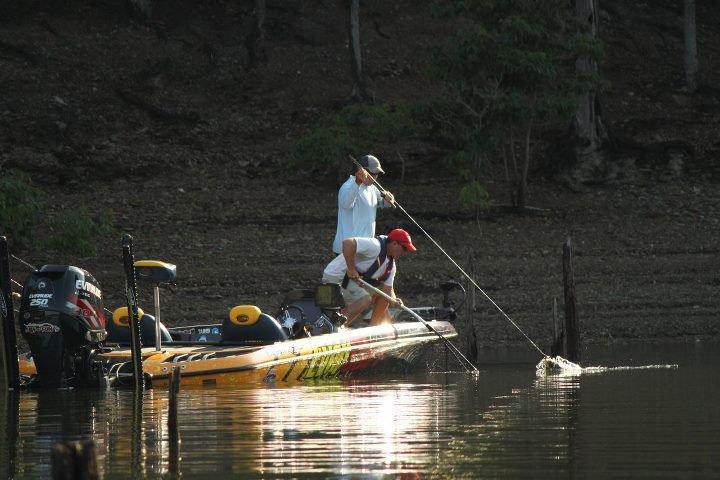 Tharp would go through a couple of the Bees until he found one with the perfect pitch. “It’s like a buzzbait after you throw it a while,” Tharp explained. “It starts to get a high pitched squeak, and if you take it off and tie on another, then you notice that it doesn’t sound the same.”

Once he finds the bait that would talk the talk, he makes it walk the walk.

He’d then wait until the bass looked at the bait. Then pop it. Timing was everything. If you pop it too close or too far away, the bass will just turn away. You can read the fish and tell if they are interested. If the first pop doesn’t get them, then the second usually will.

All that said, fishing for wolf-pack bass can be hit or miss. Anybody can catch them when they’re erupting on a bed of bream. But if you want to go out and tame the wolves like Tharp did on Ouachita, then these tips should help. If possible fish areas with bream beds, shad, standing timber and saddles. Pay close attention to your approach, making yourself seen and heard as little as possible. Pair that with a perfect presentation, and you’ll catch more of the big bank-running bass. 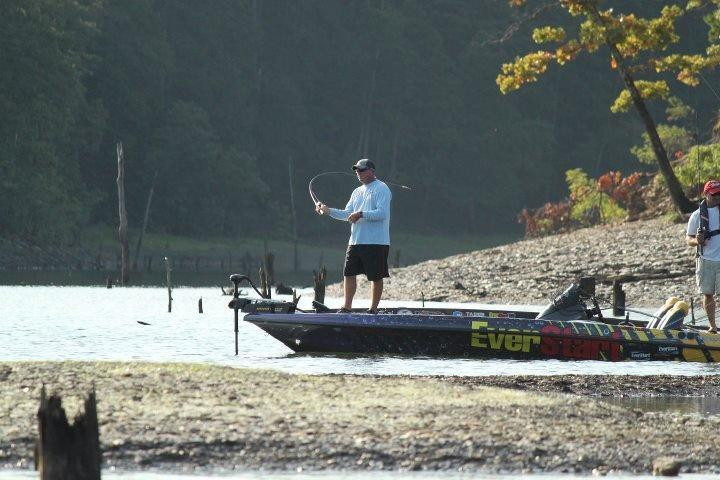