Tips on fishing for bass suspended around vertical cover like bridges, dock pilings, and trees

Video game fishing. That’s the phrase I hear a lot when guys are watching bass on their depth finder suspended around cover and then lowering a bait into their strike zone, watching them come up to eat it and then reeling them in and the whole process is recorded pixel by pixel on the screen of today’s modern fishing electronics.

Truth be told, it feels like playing a video game at times, save for better graphics and sound effects. Because of my background in technology and well boyish love of video games, fishing for suspending bass with my electronics really appealed to me the first time I watched guide Rick La Point catch a bass he saw on his screen on Table Rock a decade ago. I had dabbled with it with shaky heads on Beaver Lake some and was recommended I go see Rick do it.

I imagine for me it was like a lot of guys still feel now about their electronics. What the heck am I actually looking at? We’ll cover not only how to fish for suspended bass but we’ll begin by discussing how sonar works and then dissect screens to illustrate what appears on a graph so everyone can have fun with some video game fishing.

I will preface this by saying I’ve owned and fished with Garmin, Pinpoint, Lowrance, Humminbird and now back to Lowrance. They all have great features, and most have good sonar capabilities. I run Lowrance HDS 10 and 8 Gen 2 units. I’m very comfortable with the options, menus and more. That’s really key. Pick a graph that offers good quality and get familiar with every single option on it and what it does. I don’t set my graphs one time and never adjust them again. I’m constantly changing my sensitivity or my scanning range or my contrast and color lines. That just takes time and personal preference to figure out.

The first thing is to understand how your electronics display. We’ll start with the most common which is sonar. Most of us that have lived through the various iterations of electronics had flashers, the liquid crystal sonars, then side scanning, now down scanning and I guess we’re moving into outward scanning, 3d overlay structure mapping and more. But about every graph you buy will have the basic sonar options.

Whether you use Humminbird, Lowrance, Garmin or another brand, the first thing you do is turn the Fish ID stuff off. That is an interpretation of signals and not always an actual fish. A cluster of baitfish densely grouped  will return a large fish icon. So turn all that interpretation off and learn to interpret what is really there.  The first thing you need to understand after that is that everything is moving. A fish is not a beautiful perfect fish shaped object on the screen. The boat is moving, the fish are often moving (which is a good thing on suspended fish), and objects in the water can be moving along with the water itself.

That means you need to be able to read lines. The sonar transducer is a fixed object on the bottom or inside of your boat. It passes over something and pings back an echo to the unit. If something is dense or larger it may ping back in multiple colors. The color changes on your graph typically indicate larger fish or objects.

But as the transducer pans over the top of a fish he’s going to see a small head, big body and small tail. So what happens is the sonar draws a small line that increasingly gets larger then tapers back off to a small line again. These have come to be known as the “arches” that represent a suspended stationary fish.

In contrast, if you see a solid line that continuously is being drawn as the boat moves, that often is a fish moving in sequence under the transducer or you’re simply not moving and neither is the fish. The sonar is pinging and painting what it sees from right to left on the screen. So if it keeps pinging something it keeps drawing it on the screen. The return you see is a solid line.

These are simple keys to understanding when you see fish on your graph. Now if you turn up the sensitivity on your graph and drop something that has some mass, because a lure has to have mass for it to return a ping of any size, you will see a line as it is continuously painted by the sonar processor. It doesn’t have to be large. It has to be dense. A drop shot shows up a lot better than a balsa crankbait on the graph because of the drop-shot weight, especially if the weight is tungsten. 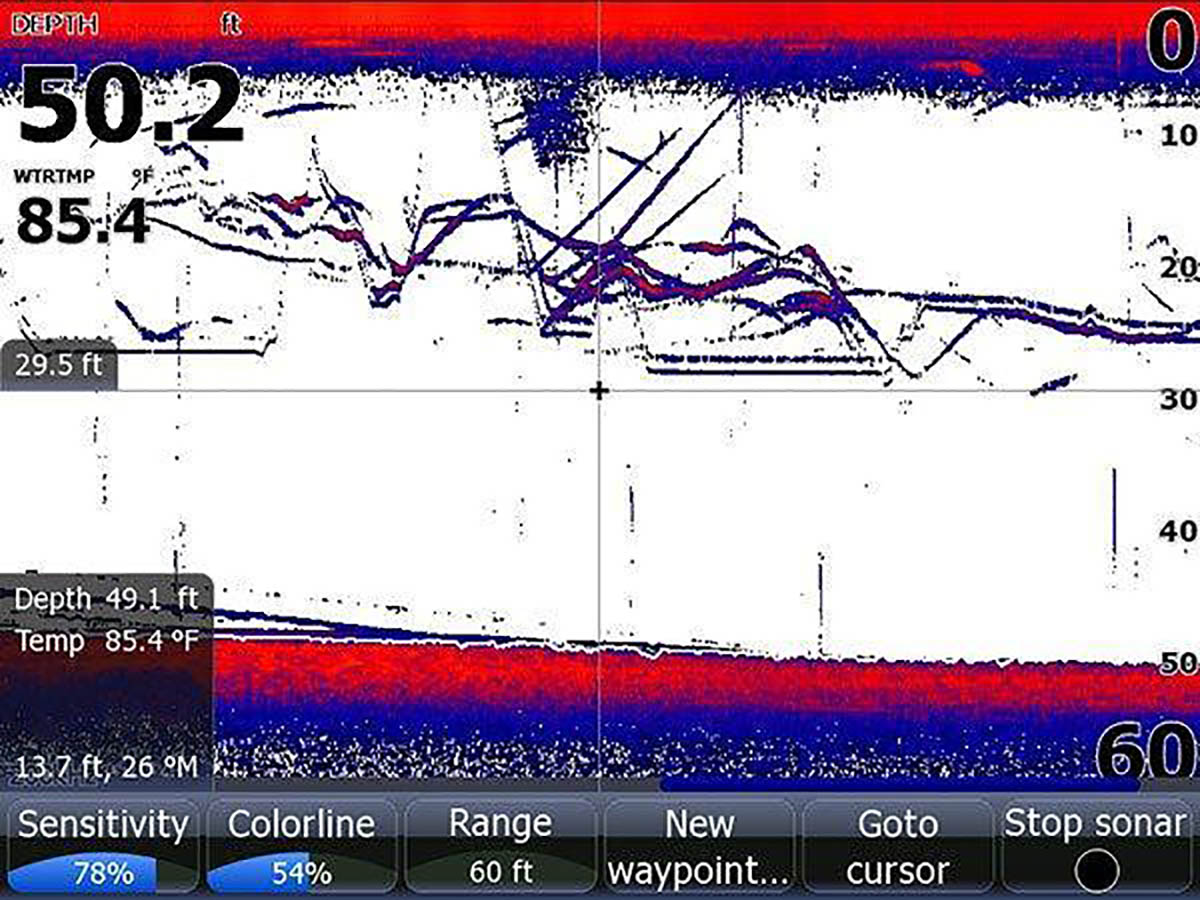 So that’s some basic understanding of how the graph reads. You can find more basic instructions here. Take this example screen shot from last week on a clear water highland reservoir where the spots were suspending 18-35 feet deep.  In this screen shot those red/blue streaks on the screen are bass. Four or five of them were up about 18 feet in the water column. We had a drop shot below them but they weren’t reacting to it. So we brought the drop shot up then lowered it back down. More fish got right under the transducer on the trolling motor where we had the drop shot worm lowered. We shook it high, then lowered it again. Then we brought it back up.

We’re basically taunting the bass with the worm and seeing if we can get one to chase. What finally happened was one bass got locked on the bait around the sinker, then slid up and took the worm, and we started reeling him up. The thing to keep in mind with sonar is what is happening right this millisecond is on the far right. What happened the furthest back in the past is on the far left because the screen is constantly pinging and painting what it sees from right to left. But what you are left with is almost a paper chart of what transpired. 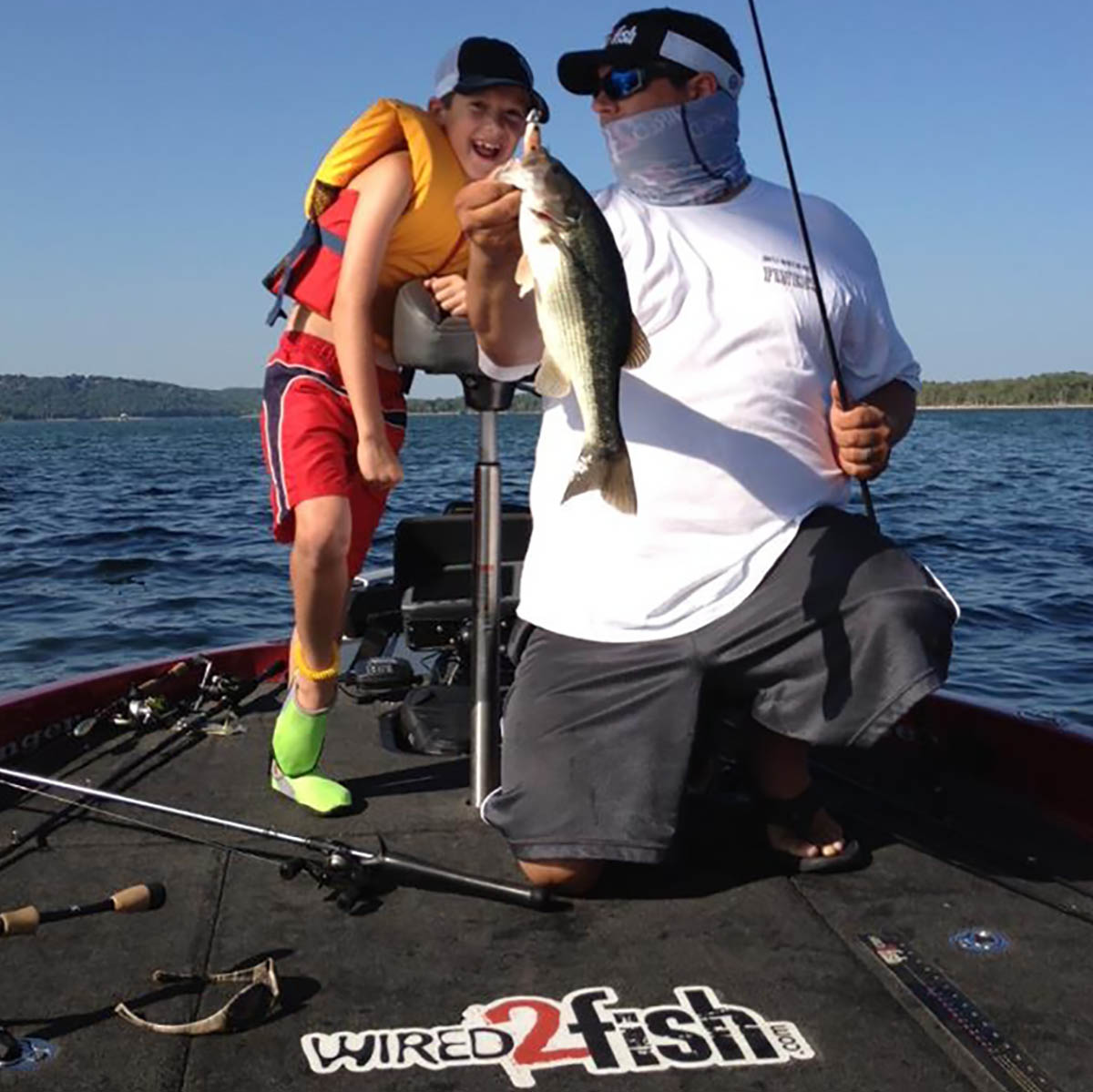 One thing I will back up and say about catching suspending bass in clear water is that distance is critical. Not only can it be critical but often relative. Time and time again I’ve found that deeper suspended bass are easier to catch than shallower suspended bass when you’re talking about dropping a bait straight down on them. Several anglers probably have their own rules here but mine is 20 feet. If bass are suspended less than 20 feet down, I don’t drop straight on them. I don’t know if it’s the shadow of the boat, the fact they can see the boat so well or what, but it seems like the fish are twice as hard to catch straight down in 10 feet of water than they are in 25 feet of water.

So how do you fish for them when they are shallower? There are lots of ways, but the key is to see they are aggressive. I can often gauge this by how they look on my HDS unit. If I see lines interleaving like strands of spaghetti, that tells me these fish are actively moving and chasing. If I drop a bait down to them, do they come up to meet the bait or follow it when it goes past them? If so, these are catchable bass. Now it’s just a matter of presentation.

I catch a lot of bass like this casting a light drop shot maybe 1/8 ounce and letting it fall slow. I also catch a bunch hopping a spoon high. But probably my favorite way to catch these fish is with a swimbait on a jighead or a fish head spin with a small swimbait.  There’s just something about winding a swimbait painstakingly slow only to have the reel lock up on you and feel a fish thrashing its head on the other end.

Again that’s the rule but there are always exceptions. Take this screen shot for example. I saw on my graph starting on the far left and working towards the right, a school of bass down about 25 feet deep. Then I saw some bait come into the mix. As I was getting ready to drop my spoon down to the deep fish, all the sudden several bass appeared just 10 or 15 feet down. I dropped on them and before I could engage the reel, the spoon stopped falling. I hollered for my son to reel up his drop shot and drop on them too. Next thing we know, we’re doubled up on fish not even 15 feet down.  That’s often the case with these suspending pods of bass. Get one fired and the others fire easily too.

That’s part one of this feature. In part two, we talked with FLW Pro Brett Hite who has mastered deep drop shots and catching suspended bass out in his western Arizona lakes. He’ll shed more light on the techniques used to catch suspending bass and how targets them with his electronics.