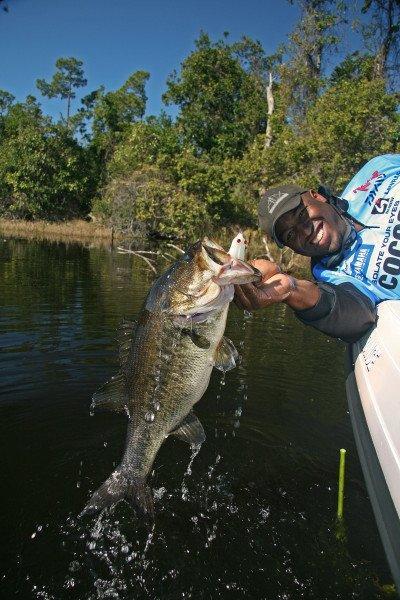 Ish Monroe is a grinder. He rolls to the beat of his own drummer and has an uncanny ability to find the right pattern that gets the biggest bass on just about every lake. He is a very versatile angler and adapts to changing conditions well. He is also known as a world class angler with a frog and has designed two for Snag Proof, Ish’s Phat Frog and the Ish’s Poppin’ Phattie. We had a chance to sit down with him and do a quick Q&A on how to put more fish in the boat with less misses, the proper equipment for the frog, his froggin’ preferences.

W2F- One of the toughest choices for those first picking up a frog for the first time is which one is best. There are so many good ones and each has little things that make them different. What would you tell a beginner and why Snag Proof?

ISH– It seems to me that the original is always best, and in most cases, they have a lot of firsts. After 60 years of building frogs, Snag Proof has a lot of firsts and they were the original. They were the first to build a floating hollow body frog that didn’t fill up with water, they were the first to use Gamakatsu frog hooks, and they were one of the first to utilize their pro staff to actually design what they wanted in a frog. That means a bunch to someone who fishes a frog a lot. It should also give folks that buy them a peace of mind that their frogs will catch fish as we count on them for our livelihood.

W2F- What is the best gear for frog fishing?

ISH-You asked about beginners and one of the best ways for them to be successful right away is have the right gear. You need a 7-foot medium-heavy rod, 65-pound braid and a 7.1:1 to 7.3:1 reel, nothing slower or nothing faster in my opinion. The reason for that is higher speed reels seem to give too much torque and you miss too many and the slower speeds don’t always allow for good hook-ups. I use Daiwa Steez rod that I designed for frogs but the new Daiwa Tatula may be better for most anglers as it is priced around $150 and is a high quality stick. I have fallen in love with the new Daiwa Zillion reel for frogging, and I use 65-pound Maxima Braid. The braid is a real key as it allows you to get frogs and fish out of the slop and cuts through vegetation better plus it floats so it keeps the nose of the frog from digging into the water and sinking.

-What is the best way to work the frog and how do you keep from missing too many fish?

ISH– Equipment is the key but feel is equally important. I work my ISH Phatt frogs on a bit of slack and when I can feel the pressure is when I set the hook. Think of it this way, if I hold on to a frog and you have tight line between you and I you will have a tough time pulling it out of my hand, but if there is a bit of slack and you pull it, you can pull it out of my hand every time.

I am a watcher of the frog, utilize contrasting colors always,  and I never take my eyes off of it. A case in point in Florida, I was fishing some tanic water and saw a fish pull the frog under but he just had the back of it. I watched him swim a bit with the frog and he made the frog disappear into his mouth, and then I set the hook. It was a 4-pounder and it was all caught on video. Frog fishing in slop is different than open water on the hook set. It is a feel deal in the slop and a visual one in open water.

W2F– Do you fish them more in slop or in open water?

ISH– I would say it’s 80/20 slop to open water but because Snag Proof has so many tools for both, both are effective and I let the conditions and the fish dictate when I use what. In open water, the strike tells the kind of bite better because you are walking, popping or chugging it when in the slop you are pulling it.  I walk the frog in open water with the rod tip down and pull it more over the slop with the rod tip higher.

W2F– Do you modify your frogs?

ISH– part of the reason I use Snag Proof is you don’t have to tweak them much. The sizes are right, and they cast great right out of the box. I will crush the rattle for more noise in my Phatt Frog now and again, but really I do not do many modifications. I don’t trim the skirts or bend the hooks much because they sit on the top of the frog and land better with the hooks up than most frogs and don’t pick up the moss.

W2F– Do you ever throw Bobby’s Perfect Buzz and if so, when do you use it?

ISH – Its pretty simple, I use it when I need a buzzbait in a place I can’t throw a buzzbait, and it is exceptional in areas that have a mixture of grass and pockets in the grass.

Check out our review of Bobby’s Perfect Buzz here. 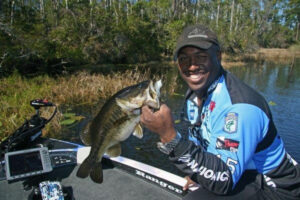 You can check out all of the Snag Proof frogs at Tackle Warehouse.