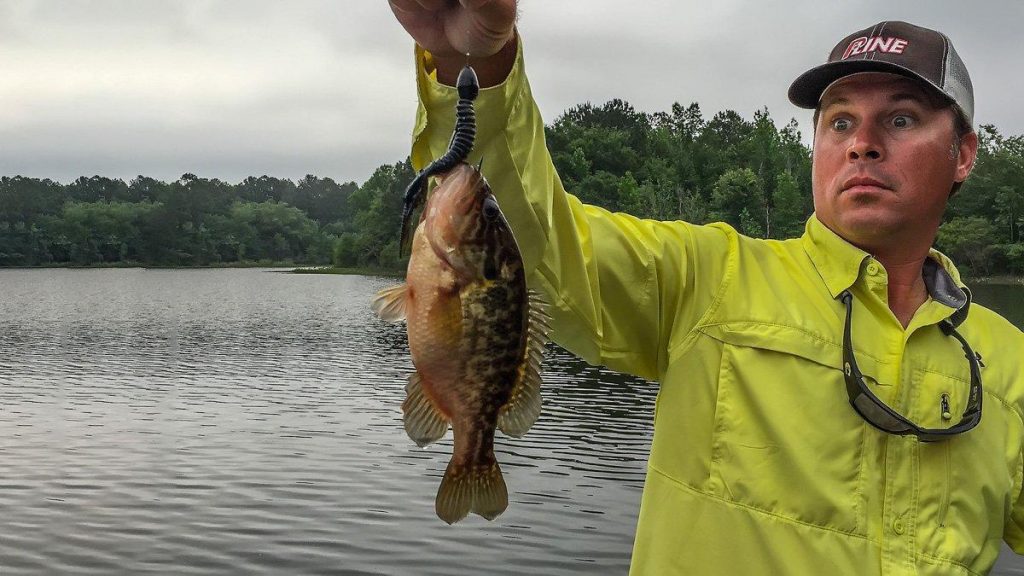 Many cues signal that summer has arrived. For some, it’s June bugs buzzing around like little flying tanks. For others, it’s the sound of bull frogs bellowing their mating calls. For me, summer is in full swing the first time I spot a honeycombed patch of bedding bluegills.

Starting in June, sunfish of all species begin their spawning ritual. Like the dimples on a golf ball, their tightly packed nests buzz with activity as they dart around, displaying for females and defending their little patches of paradise from each of the neighbors.

The bluegill spawn also provides a great opportunity to catch bass because they are reliable food sources for hungry, post spawn largemouth just as they come off the bedâ€”allowing them to stay up shallow, rest and pick off any bluegills that let their guard down.

“Bass fishing around bedding bluegills is overlooked by a lot of anglers,” Martin said. “I have logged some really high tournament finishes by strictly targeting bass that are feeding in those bluegill bedding areas. More often than not, I have them to myself!”

The occasional panfish is a good sign / Photo by Spencer Howerton

Bass expend a lot of energy during the spawn. To recover that energy, they need to quickly find a reliable and high-protein food source as soon as they come off the bed. For many bass, that food source is shad, which is what pulls a majority of post spawners toward the points, ditches, and creek and river channel edges where shad are found in the summer.

The mass exodus to offshore structure doesn’t affect all bass though. At the same time, many are vacating the shallows, bluegills begin fanning out their nursery patches. Which is enough to hold a few (in particular the bigger females) up shallow for a few additional weeks.

“Fishing bluegill beds is definitely a big fish pattern,” Martin said. “Bluegills are big, awkwardly shaped, and have spines. It takes a pretty big mouth to comfortably eat one, so most of the bass you catch around their bedding areas are going to be in the 3 to 8-pound class. Let’s assume you’re a big enough bass to easily consume a bluegill. What’s the point in expending the energy to travel out deep and chase shad when you can just cruise a bluegill bedding area and pick one off whenever you want?” 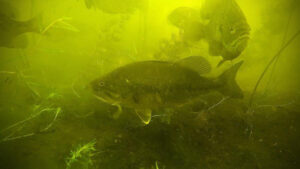 In general, bluegill bedding areas range in size from just 5 or 10 beds in a clump the size of a trucks hood to 50 or 100 beds in areas the size of a basketball court. Regardless of size of the area though, it’s likely each one will have a group of bass using it as their primary feeding ground.

“You want to look for wolf packs of 3 to 10 bass hanging around each bedding area,” Martin said. “I like to put my trolling motor on high, and just cruise around the shallow, sandy flats, backs of pockets, and shallow grassy areas looking for the telltale beds. Once I find a group of beds, I’ll start looking for bass cruising the perimeter or hanging around some nearby piece of cover like a grass clump, dock, or laydown. They’ll just hang out near that stuff and dart out whenever a bluegill strays too far from its nest.” 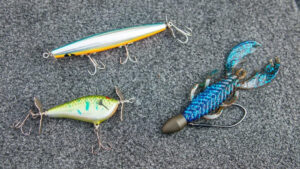 To target bass feeding on bedding bluegills, Martin has developed a two pronged approach that combines a topwater prop bait with a light flipping setup.

“For whatever reason, bass feeding on bedding bluegills can’t resist a prop bait twitched over their heads,” Martin said. “It looks exactly like a struggling bluegill, and they absolutely crush it. I always start out throwing the prop bait, and a lot of the time I won’t put it down all day unless I’m working a specific fish.”

When he’s not getting bites on the prop bait or sees an individual bass, Martin casts or flips a creature bait to the fish, and around the deeper edges of the bedding area as well as any nearby cover.

“If I’m not seeing a lot of activity, I like to slow down and pitch a Bruiser Baits Avenger to anything nearby that looks like it can hold a bass,” he said. “A wide-bodied creature bait on a light 1/8-ounce sinker does a great job of imitating a bluegill, and they can’t resist it when you plop it right in their face.”

For fishing the prop bait, Martin relies on a 6-foot, 9-inch MH Okuma casting rod paired to a high-speed Okuma Helios reel spooled with 17-pound P-Line monofilament. Although many prop baits are effective, he most often turns to a Brian’s Bee’s Prop B or a Smithwick Devil’s Horse.

For the flipping setup, Martin beefs up to a 7-foot, 6-inch heavy power Okuma rod paired with the same reel, spooled with 40-pound P-Line and a 2 to 3-foot leader of 17-pound P-Line fluorocarbon. At the business end, he pegs a 1/8-ounce tungsten sinker and a snelled 4/0 Lazer Trokar TK130 straight shank hook. 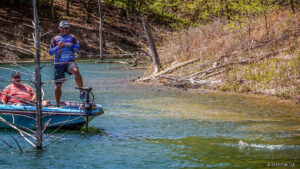 Because bass around bedding bluegills are both big and reliable, Martin is more than happy to focus tournament strategy on chasing them. To maximize his success, he spends a lot of time in practice just looking for bedding areas, and noting which ones have the better quality bass around themâ€”a process that shares a lot of similarities with bed fishing.

“When I’m cruising through bedding areas, I’m making a conscious effort to look for groups of bass,” Martin said. “Once I find a couple, I’ll actually put a waypoint into my Garmin GPS right on the piece of structure that I saw the fish holding. In a couple practice days, if I can mark 20 or 30 groups of fish, I feel really confident I can do well in the tournament.”

The 2013 FLW Tour event on Alabama’s Lake Eufaula was a perfect example of how effective fishing around bluegill beds can be. Martin finished 10th overall and caught big bass of the tournament, an almost 8-pounder, predominantly fishing bluegill beds.

“I caught them really well on bluegill beds all week, but that big one was absolutely prototypical,” Martin said. “In practice, I saw some nice bass relating to a specific clump of grass next to a big patch of bluegill beds, so I marked a waypoint. On day one of the tournament, I pulled in there and power-poled down near the clump. Sure enough, I could see a big one next to the grass clump. So, I pitched that Bruiser Baits Avenger in there, and she ate it. Had I not marked that clump in practice, I probably would have spooked that fish on my approach.”