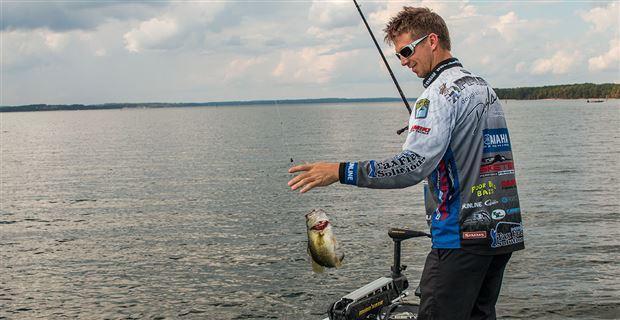 It’s not some giant, well-kept secret that bass love aquatic vegetation. It attracts forage, increases oxygen levels in the water and gives them plenty of strategic hiding spots from which they can ambush unsuspecting prey. Grass offers a bass everything it needs to thrive.

There are times, however, when the grass bite can get downright horrible. But don’t assume they’re not in the salad—because more times than not, they haven’t gone anywhere. It might just take a bit of angler ingenuity to trick them into biting.

Before you start rigging, there are several important factors to understand about this approach.

The most important question 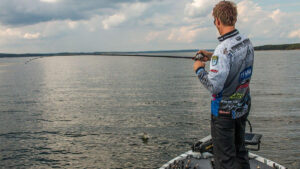 In order to maximize your finesse fishing success in the grass, it’s important to learn how to detect the most productive areas on a given fishery. Many anglers are overwhelmed by grass fishing because everything seems to look identical, so the first step in this process revolves around finding high-percentage areas.

“When you’re in a virtual sea of vegetation, it can be really difficult to know where to start your dissection,” Pipkens said. “But over the years, I’ve learned that if you can break down an area while taking all of the grass out of the equation, you’ll quickly find bass. Essentially, I’m always asking myself what the fish would be doing if there were absolutely zero grass to be found.” 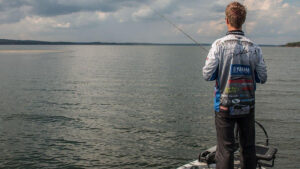 Just like most bass fishing terminology, “finesse” is a relative term. For some anglers, it might mean dropping down to 4-pound test to target clearwater smallmouth and for the diehard power fisherman, it might mean using 20-pound fluorocarbon instead of 65-pound braided line.

Finesse fishing grass, however, is somewhere in the middle.

“Think about how most anglers fish grass,” Pipkens said. “They’re punching 1 1/2-ounce weights, heavy jigs and chucking noisy frogs with braided line across the tops of the vegetation. The fish get pounded by these bulky presentations and can absolutely become accustomed to them. I’m not suggesting you break out 8-pound test and a tiny drop shot. But 17-pound fluorocarbon and a 1/2-ounce weight can easily be considered ‘finesse’ in this situation. Very rarely do the bass see that.” 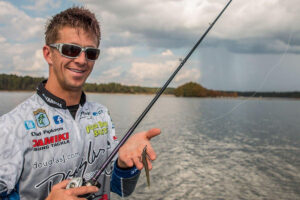 Perhaps no other bass fishing rig has stood the test of time more so than a Texas rig. Many anglers’ earliest catches have been the direct result of an old worm hook, a soft plastic bait and a lead bullet sinker. This proven rig is, in fact, Pipkens’ first choice in regards to finesse fishing grass, but with a modern-day spin.

“If the grass bite is tough, I will always have a 3/8-ounce Texas-rigged Damiki Stinger on 16-pound Sunline Super FC Sniper Fluorocarbon nearby,” Pipkens said. “That’s my old standby and it’s incredibly effective. The Stinger is a small stick worm that penetrates cover easily and I’ll rig it weedless on a 3/0 Gamakastu Heavy Cover Flipping Hook.”

Many of bass anglers are familiar with the drop shot rig—a bass fishing rig in which the weight stays in contact with the bottom while a soft plastic finesse worm subtly dangles, sways and twitches a few inches above.

“When you consider a drop shot, visions of lightweight line and spinning gear probably come to mind,” Pipkens said. “But you can actually beef it up and utilize casting gear and 14-pound Sunline Super FC Sniper Fluorocarbon to make a surprisingly powerful setup.”

If all else fails, Pipkens isn’t afraid to result to a finesse drop shot rig on spinning tackle. Although it’s not his primary choice when dissecting grass, he believes it’s an excellent way to save an otherwise subpar day of fishing.

“This rig is as natural as you can possibly get,” Pipkens said. “I’ll use 12-pound Sunline FX2 Braided Line as my main line, attached to a 10-pound Sunline Super FC Sniper leader and believe it or not, it gives you a surprising amount of power for such a finesse technique. That braid is very important because it cuts through the grass like a knife and has absolutely zero stretch, allowing me to get a quick hookset and get ‘em out of the grass before they wrap me up.”

If you can’t quite seem to get the grass bite going this year, don’t hesitate to put away the heavy artillery in favor of these proven finesse rigs. It may take a few bites to gain some confidence, but you’ll enjoy a lot of bonus fish catches if you can stick with it and utilize Pipkens’ advice. 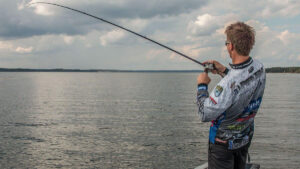