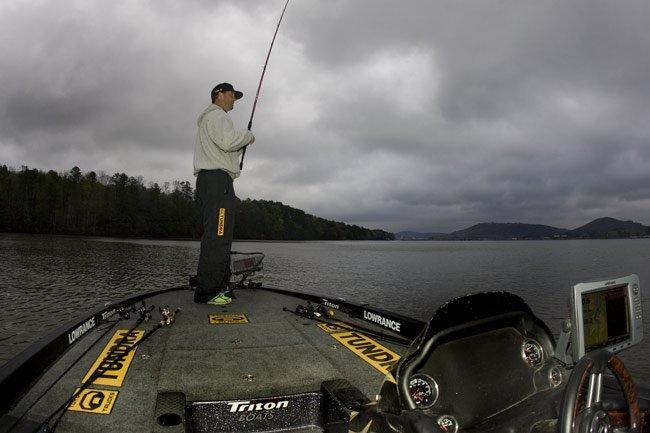 You fish too slow. That’s going to go against the grain of how your father or grandfather taught you to fish. But sometimes the truth hurts. And of course there is a catch. The truth is anglers should fish thoroughly, but they should do that in areas that have potential.

And you find those areas according to some of the sports top pros by fishing fast.

“The biggest difference between a pro angler and a weekend angler is weekend anglers fish too slow in the wrong areas,” Michael Iaconelli said.

That wasn’t a slight on weekend anglers, but he was illustrating the point on a recent trip, and his fellow pros backed up his theories. People are trained to fish slow and thoroughly, but when you’re searching for them, you can fish slow in the wrong area for way too long. The time to slow down is after you find a biting bass and are looking to expand the area.

We spent 12-16 hours working on this story with pros Iaconelli, Gerald Swindle and Terry Scroggins during the prespawn on a great fishery between Bassmaster Elite Series tournaments.

When they get to a fishery, the first thing they do is check out the water temperature.

“Before I even make a cast, I already have a pretty good idea what the bass are going to be doing by looking at my Lowrance Electronics and the water temperature,” Iaconelli said. “Then it’s a matter of hitting a lot of different areas to see exactly where the bass are holding. We’re here in the prespawn so the bass are going to be staging and heading to spawning areas so we have to figure out where they are in relation to those areas.”

Map study can get anglers ahead of the game by knowing where spawning flats are and where the last deep water is leading to those flats. It can clue them in on areas that might have current or grass or manmade structures to check. So studying maps before hand can get fishermen ahead of the game on unfamiliar bodies of water.

The next part is choosing tackle based on seasonal patterns and regional effective lures. You can find out a lot about colors and regional baits on the web or from your past experience on the fishery. For example, if its prespawn and grass, you’re talking about jigs, crankbaits especially lipless crankbaits, jerkbaits, and maybe some spinnerbaits.

To effectively find the fish, it’s a sheer volume game for these pros. Cover enough water to know where the bass are and look for that very first bite. And this is where speed is a factor.

“When I’m covering water looking for fish, I keep my boat at a pretty good pace and don’t really stop until I find something or get a bite,” Swindle said. “Even if the water is cold, I’m still moving my boat pretty fast trying to hit key spots in an area with the right bait. I keep experimenting with baits until I find one to which they are reacting.”

Ike began his search on our morning session by fishing a main lake flat near the river channel. He cranked both shallow and deep before abandoning the area and looking more towards the backs of a creek and those flats.

From there he hit a nearby section of docks, then a marina area, then some riprap, then another flat in the back of a creek pocket, then a secondary rocky bank and then it happened. He hooked into a 5-pounder with a Rapala DT6. How long did it take him to figure out the lake he hadn’t been on in more than a year? It only took 90 minutes.

“There is a philosophy in fishing called fish everything,” Iaconelli said. “That just means when you get to a section of the lake, you hit everything in that section quickly to see if you can get a bite. Most of the time your first bite is not a fluke. It’s that key piece of the puzzle that helps you see where all the other pieces fit. Maybe 10 percent of the time a bite is misleading, but 9 times out of 10 that first bite helps you figure out the fishing that day.”

Swindle’s experience was very similar on his first day on the lake. He started with riprap.

“Rip rap is something I always check. Some people over analyze rip rap. It’s just rocks. I fish them shallow with a shallow crank and if they have deeper water I’ll come back through with a deeper crank.”

After the riprap failed to produce he ran to a grassy pocket. He made 10 casts with a lipless crankbait and determined the water was too cold and too muddy for his liking because he had seen warmer water further up lake. As he left the pocket, he noticed coots on a point where the water cleared. He pulled in and started casting a lipless crankbait. Almost immediately he had a bite, and another and another. 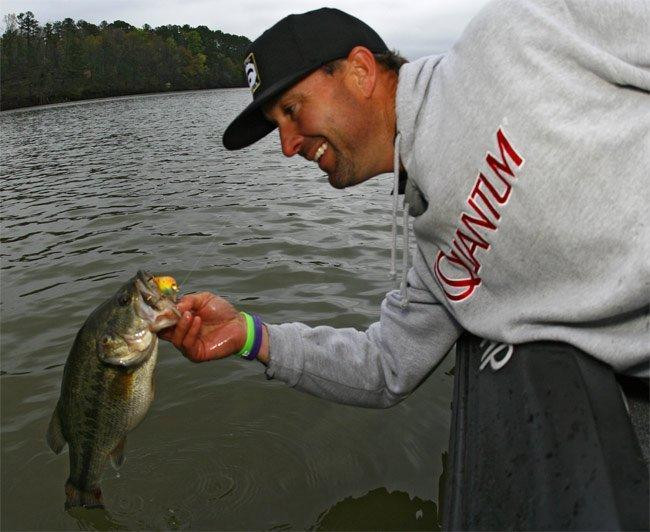 Moments later he was hooked up and fighting a tail hooked bass to the boat. He figured this out in about 45 minutes of fishing. In that time, he cast two different crankbaits, three different lipless crankbaits and a jig. He fished around bridge abutments, rip rap, grass flats, and a grassy point near the channel with stumps on it is where he found the fish staging waiting to move up.

Both anglers left their trolling motor on 100 and moved and made casts in different directions, fanning an area, hitting isolated targets where possible and in areas like marinas and docks, both would make random pitches trying to do something different on every cast. They would hit outside posts, then inside posts, then under a boat, then under a walkway, then on the end of a pier, then behind a pier. Maybe it was a jig. Maybe it was a buzzbait. They moved fast, pitched and cast fast and even worked the baits fairly fast even though the water was around 60 degrees.

Speed fishing in the cold?

Terry Scroggins cranked a big Fat Free Shad at a good clip as his hand stopped.

And as quickly as the bait had stopped, the fish was gone.

“They are biting funny this morning because of the lack of current,” he said.

The afternoon before, his speed search had lead him to a deep water channel swing near a bridge where the bass were congregating waiting for the nearby backwater area to warm and they would spread out and begin their spawning ritual. The spot was loaded with bass, and he was catching them two at a time cranking the big BDS7 model of his favorite Bomber bait. The next morning things had changed.

So back to his speed search he went. He fished the spot for a while before getting on the trolling motor and hitting the other side of the bridge.

“There they are,” he said. “Look how they are suspending in the deep water around this bridge. They aren’t up on the swing like they were yesterday.”

He jumped down in the console and began idling around up and down the rip rap and around the area to see if some active fish had moved areas.

He quickly got back on the deck and began casting on the other side of the swing along the rip rap on roadway. Immediately he began catching bass after bass. Only problem was they were small. He fished around and caught a couple quality bass to 4 pounds.

He concluded that his honey hole was now a timing spot. They would be active and aggressive on the swing when current was funneled under the bridge. When they weren’t pulling current, they were more scattered and suspended, and he would have to grind more in his area.

But again the speed he cranked was amazing given the water had cooled off, and wasn’t terribly warm to begin with.

“People think you have to crank slow when it’s prespawn conditions or when the water cools off again,” Scroggins said.
“They are reacting to the bait. You can tell the way they are hitting it today and not staying hooked up they are just reacting to it and not eating it out of hunger. It’s the speed that gets them to react. It’s a great way to search them out when you’re just trying to find them in practice. Maybe in a tournament I would yo yo an Xcalibur One Knocker or throw a Big Show Paddle Tail worm on them and really soak it to get them to eat it better. But I find them faster with the crankbait.”

“A lot of people think speed means just reeling fast and haphazardly casting,” Swindle said. “I’m still fishing thoroughly, making good casts, making sure I contact the grass, the stumps the rocks, making sure I trigger fish with my retrieves. I make sure I hit the obvious and not so obvious targets in an area and if it fails to produce I keep moving.”

So move fast, make precise casts, try different lures, don’t stay in an area not producing   for too long, and keep hitting different stuff until you find somewhere the fish ARE reacting to your baits. Fishing is a puzzle. Whether you’re on vacation on a new fishery or you’re preparing for the biggest tournament of your life, the key is to move fast, move a lot and change often until that first bite unravels the mystery. 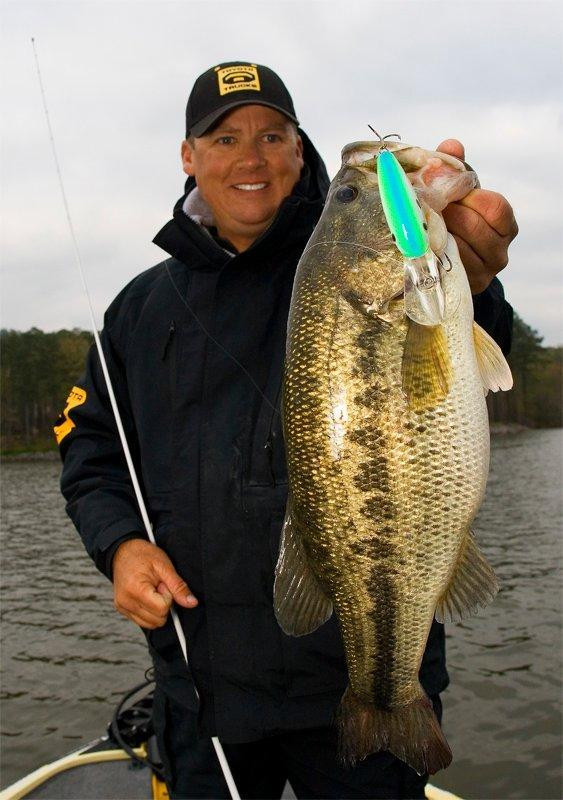