March is mostly affiliated with St. Pattyâ€™s green, but among serious bass anglers, orange is the color that should never be overlooked in springâ€™s chilly and rain-stained prespawn waters. In fact, a fast glance at the 2016 Bassmaster Classic competitorsâ€™ lure choices revealed orange to be hugely popular.

Like many of his competitors, Team Toyotaâ€™s Mike Iaconelli leaned on an orange crawdad-colored Rapala Shad Rap at the 2016 Classic, and too many Classic anglers to mention cranked orange and red shallow squarebills.

Last yearâ€™s winner Casey Ashley leaned on a jig with orange strands in the skirt and this yearâ€™s $300,000 winner Edwin Evers included a spinnerbait with the once secretive orange/red front kicker blade in his three-day arsenal.

The goodness of orange is certainly not limited to Grand Lake oâ€™ the Cherokees. Anytime water surface temps are in the 50s and stained to muddy, orange will likely be the most productive color you can tie on and the variety of lures containing the beacon hue is a vast one.

Some choose the No. 5 size while others choose the No. 7, but few leave the dock without this orange/brown bait in early spring. Consider upgrading the hook size to make this light-as-a-‘tater-chip lure cast easier and suspend a little better in the face of lethargic bass.

There are virtually dozens of different crawfish species throughout the United States, and most feature orange pinchers. If youâ€™re going to tip a bulky jig with a soft plastic craw, utilizing one with highly visible orange pinchers in off-colored water simply makes sense.

â€œGary, Bill and Dick Storm actually talked to Missouri Department of Conservation biologists in the late 1960s to research crawfish colors,â€ remembers Jim Morton, a former B.A.S.S. pro who worked closely with Storm for 31 years. â€œThey learned there were 26 different species of crawfish in the White River drainage basin around Table Rock, Beaver, Norfork and Bull Shoals and most of them had orange on their pinchers, and elsewhere on their bodies.

â€œThatâ€™s why the earliest and most popular V62 and V63 green crawfish and brown crawfish-colored Wiggle Warts were painted with orange paint on the diving bill,â€ explains Morton. â€œThe Storm brothers also learned that instead of leaving the belly of the lure white, that adding orange to the bellies triggered far more bass to bite.â€ 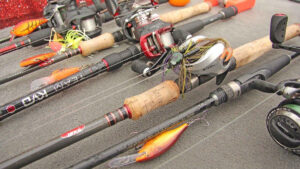 When aquatic vegetation is present, few lures catch more pre-spawn bass than orange/red shades of lipless crankbaits. The key is to â€˜tickâ€™ the tops of the submerged vegetation with the lure, to trigger strikes. Fish it too slow, and youâ€™ll bog down in the salad, fish it too fast and you wonâ€™t get as many bites.

Use a rod with plenty of backbone to help you jerk the lure free when it does bog down, yet with a soft enough tip to keep these easily shaken lures hooked as well as possible. Quantumâ€™s TKVDC6106F is a great 6-foot, 10-inch stick for lipless cranks.

Replacing the traditional silver or gold front blade of a spinnerbait with an orange/red kicker blade was largely a secret among anglers in Oklahoma, Arkansas and Missouri until the success of top regional spinnerbait assaultants like Ron Shaw became hard to hide.

â€œIt was pretty much a secret when I started throwing it in the early 90s, and then I shared it with Ken Cook, and eventually it became a big part of the product line that Hart Tackle Company offered back then,â€ Shaw said. â€œKen always said it was an all or nothing lure; either theyâ€™d hardly hit the orange/red kicker blade or youâ€™d wear â€˜em out on it. I agree with him, but when the water temps are in the low 50s, I lean on it hard. Itâ€™s always a go-to bait for me in stained to dirty water in early spring.â€

Certainly, the uniquely colored blade is no longer a secret. Nearly 25 years after Hart Tackle Company made limited numbers of them, several 2016 Bassmaster Classic competitors used one made by various brands, including winner Edwin Evers.

Perhaps the most popular lure of all at the 2016 Bassmaster Classic, because cold water, rocky banks,  and orange craw colored crankbaits make for a hard-to-rival early Spring equation for success.

Brady Winans, a Toyota Trucks Bonus Bucks pro staffer, whose name is often at the top of the standings in Texas events, admits he has a bit of a crankbait obsessionâ€”especially orange ones in early spring.

â€œWhen the water temps range from 50 to 55 degrees you can crush â€˜em on a new bait called the Movement 80X from 6th Sense Lures, in a color called â€˜Wild Lava Crushâ€™,â€ Winans said. â€œThat bait hunts hard and vibrates likes a No. 7 Colorado blade on a spinnerbait.

â€œNow, once the water temps hit 60, they favor shad patterns, but in the lower 50s they crush those orange colors like Wild Lava Craw and Lava Treuse.â€