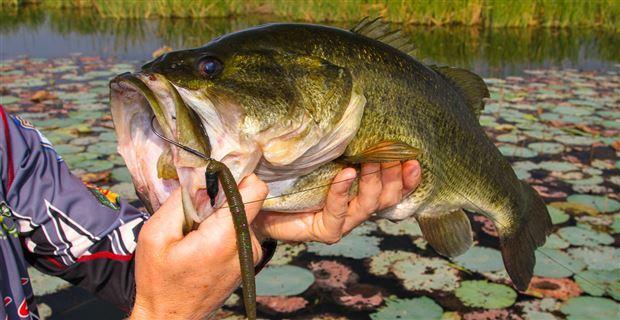 Classic survivalist question: “If you could have only one … (fill in the blank), what would it be?” The premise, while clichéd and seldom as comprehensive as intended, does make us think about how we judge the items relevant to our pursuits.

For most anglers, versatility is one of the top criteria. To that point, there’s simply no single bait that does it all. But, if you’re looking for a bait that can play multiple roles from power fishing to finesse fishing, you’ll be pretty happy with soft stick baits.

This genre owes its existence to bass fishing legend Gary Yamamoto, whose original 5-inch Senko quickly became one of the sport’s most impactful creations. Heavy with salt and built for limber action, this bait’s simple appearance belies its deep well of potential.

“There are not many places you can’t use a Senko,” said Dobyns. “I probably use this more than any other bait. If you told me I could have only one bait to fish, it would be a Senko.”

Probably a safe assumption that, regardless of brand preference, fans of the soft stick bait share Dobyns’ appreciation for this utility player.

Why they are effective

Simple as it is, consider what this bait brings to the table:

Enticing wiggles with minimal action means the bait often does the work for you.
Slender and subtle, it suits a variety of finesse fishing presentations.
An aerodynamic shape enables you to fire off long casts – even in windy conditions – to cover water and find active fish.
With no peripheral elements, the stick bait suffers less wear and tear than more intricately detailed baits. When hook tears mar the head end, bite off a ¼ inch and keep fishing. 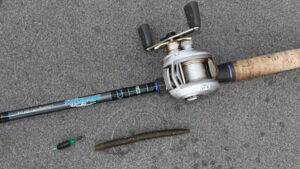 How to rig them

A comprehensive list of soft stick bait applications will likely remain a work in progress. But for illustrative purposes, we’ll look at a handful of perennial favorites, along with some creative plans.

Probably the most common soft stick bait presentation – if, for no other reason than its user-friendly simplicity – is the wacky rig. A bona fide bite-getter in any depth from less than a rod length to more than a boat length; rigging a short shank hook a little ahead of the bait’s midpoint makes both ends try to out dance one another. An occasional rod twitch exaggerates the bait’s natural motion and bolsters the appearance.

Expand this notion with the various weighted wacky hooks and wacky jig heads (flick shake) and you can take that double-ended wiggle straight to the bottom to entice the fish hanging low in the basement. In deeper spots, this “flick shake” adaptation may find a taker before reaching bottom, but it’ll spare you the agony of waiting for standard wacky rig to saunter its way into the depths.

FLW pro Roy Hawk employs this technique a lot in deep, clear Western fisheries. He’ll rig a 4- to 5-inch Senko on a Gamakatsu Wacky Head, whose flat epoxy head creates a wobbling action on the fall to exaggerate the bait motion.

“Throw it at anything that looks good – grass lines, pockets, docks, single rocks, shade lines, etc.,” Hawk said. “The weighted head gives you better control with a faster fall and can cast and fish out farther. Vary the weight of the head depending on wind, current and depth.”

For another take on heavier wacky rigs, stick a sliver of lead into your soft stick bait’s head and now the “nail-weighted” bait falls nose-first to the bottom with plenty of wiggle remaining in its tail section. Hawk prefers this presentation over the flick shake in deeper waters, as the rig falls faster with less lateral resistance.

“I use a nail weight or a screw lock weight in the thick end of the Senko and pin the hook in the middle,” he said. “Because the weight is in the head, it will fall straight down and very fast in comparison to the weighted hook. This allows you to fish this rig easily in depths of 15-45 feet on 4- to 6-pound line.

“With both rigs, I cast out and allow the bait to fall naturally to the bottom then employee a drag, shake softly, fall technique. When a fish bites, just load the rod and reel to set the hook.”

Here’s a tip from Wataru Iwahori – a Japanese pro I met at Yamamoto’s ranch in Palestine, Texas: Insert a nail weight into a Senko’s head, but instead of a traditional perpendicular hook placement, position the hook in line with the bait – shank facing forward. This allows you to fish a nail-weighted bait through vegetation with far less snagging trouble than trying to pull the worm through sideways, as with the traditional nail-weighted wacky version.

Texas rigged: The bait’s svelte figure makes it ideal for flipping, pitching, casting or skipping into the shadows of docks, laydowns, lily pads and all those hidey holes where bass lurk. General density gives the bait sufficient momentum in weightless presentations, but Bassmaster Elite Series pro Kevin Hawk finds that fitting his Senko with a bullet weight helps escort the bait through vegetation.

Hawk’s fellow Elite pro Terry Scroggins keeps an unweighted 5-inch YUM Dinger handy when he’s topwater fishing around shallow vegetation. If a fish misses his Heddon Zara Spook or Cotton Cordell Boy Howdy, he’ll throw the Dinger at the point of contact and any fish fired up enough to show itself topside will generally respond quickly to a subsurface presentation.

Trailers: For that “something different” flair, stick a stick bait on the back of that swim jig or vibrating jig and show those finicky fish a more streamlined profile. Likewise, this bait offers an appealing package when paired with a skirtless football head – a productive look for walking down bluff ends.

Shaky head: FLW pro Casey Martin rigs a 3/16-ounce shaky head with a 5-inch ZinkerZ, which stands upright for an enticing look. Pitched around docks or fished over deeper structure, the stick bait’s elongated profile presents an enticing target as it shimmies across the bottom.

Dropshot: For a simple baitfish profile with enough bulk to interest a hungry fish, nose hook or Texas rig a 3-inch stickbait. Need a bigger presence for power shotting? No worries, upsize to a 4- or 5-inch bait and go with a wacky rigged look for maximum motion.

Carolina Rig: Pairing his ZinkerZ with a monofilament leader, Martin lets his bait float above the short grass on ledges and offshore points for the appearance of a waywardly vulnerable baitfish. 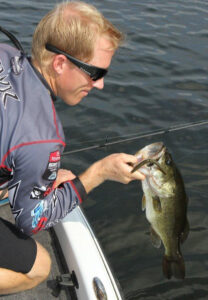 The independent attraction of a soft stick bait, notwithstanding, tough conditions may necessitate some cosmetic enhancements. Several bait makers offer color patterns with high-vis chartreuse tips, but dipping dyes and dye pens make it easy to dress up any bait. Chartreuse gets most of the carries, but a flash of orange might also do the trick – particularly where bluegill abound.

Another color tip: Rubbing the tail of a Senko not only releases more salt, but it subtly changes the color. It’s not as vivid as a dye, but in a pinch, this on-the-fly alteration offers a little more diversity when the fish have seen enough of one color.

Lastly, don’t overlook the accessories. Kevin Hawk occasionally enhances his wacky-rigged Senko with an Owner Flashy accent – an Indiana or willow leaf blade rigged on a barrel swivel, which slips onto the hook bend for just a touch of pizzazz. (A clear plastic spacer keeps the Flashy Accent from marring hook sets.)

“I use this in murky waters or in situations with high fishing pressure when want to draw a little more attention to my bait,” Hawk said.

Elsewhere, the Fish Arrow Whicky Head brings flash to the wacky jig head by placing a prop blade high on the hook shank, with a rubber cone to keep it away from the business end.

Options are many for soft stick baits, their relevant tackle and accessories. But most impressive, are the many ways these simple, yet far-reaching baits will help you catch fish. 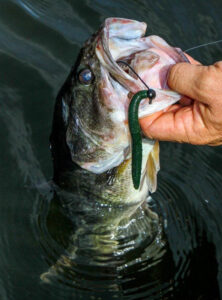