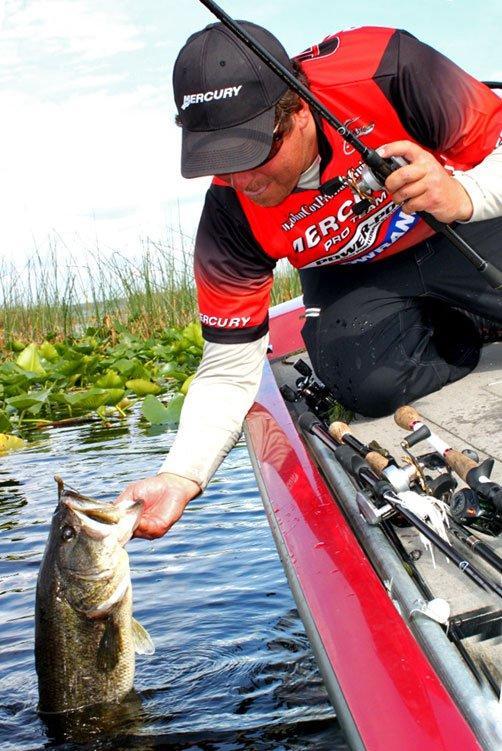 Florida bass fishing can be some of the best in the country no matter what time of year you hit the water. With mild to scorching hot temperatures year round the bass never get cold in Florida, so they never stop growing. Arguably the best time to head south however is on or around the spawn. Large females move in to the shallow weedy waters of lakes like Lake Okeechobee to feed up, lay their eggs and then feed heavily again before returning to open water or burying up in thick vegetation.

The tail end of the spawn is one of the most exciting times to bass fish in Florida. It seems that there are hundreds of bass per acre fresh out of the spawn and no longer preoccupied with furthering the species along. Once the females lay their eggs, they don’t wait around for room service. Instead they hop out of bed and get on the prowl for whatever they can find. This presents a perfect opportunity to peruse the shallows with reaction baits and load the boat.

The aggressive males hang around and guard the new hatchlings, or fry. Their innate protective nature tells them to protect their offspring at all cost. So as they work to keep bluegill and other predators away they make themselves susceptible to almost anything that looks like it could eat one of their young. This is where the avid angler comes in again with the reaction baits and takes advantage of Mother Nature’s bounty.

These Florida tricks can work on other grassy lakes in the Midwest and northern parts of the country as well when bass are around the spawn.

One such angler who has been targeting these post-spawn feeders for years is Mercury pro John Cox. He has used tricks that he learned from an early age to catch fish all over Florida as well as similar lakes across the country. His most recent accomplishment came while swimming a jig to finish second in the Walmart FLW Tour Open on Lake Okeechobee in February of 2012. 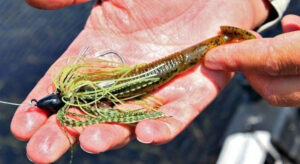 While most anglers were flipping for fish buried in thick matted vegetation, Cox was able to swim a jig in sparser weeds to bring in nearly 20 pounds a day and inevitably finish runner-up.

The swim jig Cox uses is made by Rattle Head Baits. Cox typically trails his jig with a Skinny Dipper style bait, one that has become synonymous with grass fishing, especially on Florida lakes. Depending on the depth of the water and the thickness of the vegetation, Cox will vary the size of his swim jig from 1/8 to 3/8 ounce and typically go with a darker color to imitate a bream after the spawn.

Fry usually hang pretty close to some sort of cover for protection, so Cox likes to throw at targets. He’ll pick apart an area clump by clump and is always sure to parallel whatever vegetation that he can to get the most out of each cast. 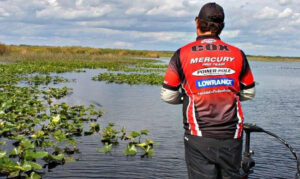 Another bait that is a must have for these type situations in a Zoom Speed Worm. This is also a staple in most Floridians arsenals during the post spawn months. Cox adds a small tungsten weight to the nose of the Speed Worm and then Texas-rigs the bait, making it is weedless.

This more subtle bait offers a nice alternative for some of the moody Florida fish that have not completely progressed out of the post-spawn funk that most fish go through shortly after spawning. Rigging the worm with a small weight helps submerse the bait, allowing it to be fished a little quicker and also greatly improves the baits castability.

Don’t let the small stature of the speed worm fool you. Like many Floridians, Cox has hauled in some giant bass on the little worm. Although he doesn’t like to downsize, he knows it’s a must at times to get the big girls to bite. Green pumpkin, junebug and black and blue are all great colors in the Speed Worm which comes in two sizes.

While Cox meanders through the spawning grounds he is also always on the lookout for a late spawner that he might be able to double back on. Often times, bass in the grassy, shallow reservoirs in Florida will bed offshore to the point where landmarks become non-existent.  With no visual reference points it becomes difficult to triangulate and locate the fish on the next pass.

While GPS waypoints on Cox’s Lowrance unit are a big help in getting him back to the general area where he spotted  a bedding bass, he needs a little more to hone in on exactly which one of the numerous beds on a spawning flat actually held the big bass.

This is one reason Cox keeps a push-pole in the boat at all times.  The obvious advantage is using the push-pole to sneak up on weary spawners during the height of the spawn. However, towards the tail end of the spawn Cox will typically use his trolling motor as his primary mode of transportation in the shallows and the push-pole takes on another purpose.

If Cox happens to stumble up on a bedding bass that he wants to return to, he will take his push-pole and jab it down into the ground near the fish’s bed. There are a few disadvantages to this approach, one being that he can’t venture too far away since he runs the risk of someone making off with his push-pole or someone cracking the code and using his marker to find his newly acquired fish.

Cox’s solution to this is simple. If he is in a high pressure situation or perhaps the ground is just too hard for him to get the push-pole to stand up, he has a few pre-rigged bobbers attached to a short piece of fishing line with a weight on the end. He’ll use these to mark fish and then let them settle back down. When he returns, he is able to get the exact position he needs and has the best shot at extracting the fish.

Using little tricks to help himself get a step ahead of the competition has put John Cox on the national fishing radar and has jump started his young career. Company that with the patience that only a Florida fisherman can inherently exude and Cox has a fairly fool proof guide to shallow grass, post-spawn bass fishing.

Using reaction baits to cover water and trigger strikes is always a fun and fast way to catch big stringers during the post spawn if the fish are biting. But don’t be fooled if for some reason they want strike or commit to your bigger baits. The big ones are likely there, and if they are, they can definitely be caught. Just slow down, and you’ll be fishing like a Florida pro before you know it, catching big ones and beaming big smiles. 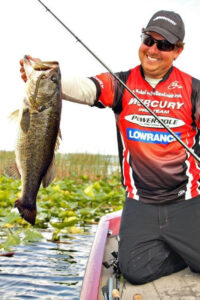