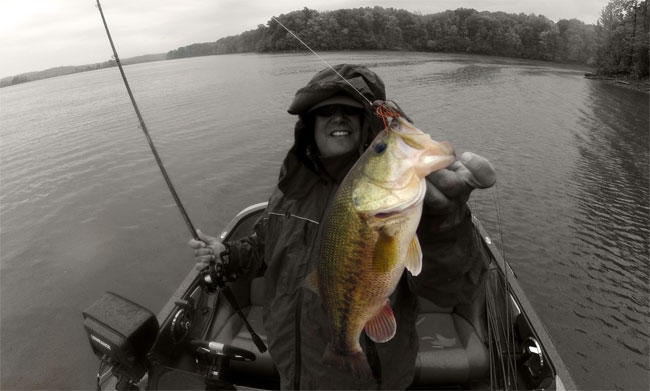 Certain things in life are just better done slowly. Things like cooking a steak, enjoying a fine wine or sitting on the front porch in the rocky chair with a glass of iced tea on a spring sunset out by the lake. The same goes for fishing I suppose. A Texas-rigged worm generally needs to contact the bottom, and that often requires a slow deliberate retrieve. A jig is much the same.

But fishing baits that generally need some sort of bottom contact doesn’t have to be a painfully slow approach to finding fish, especially ones that seem reluctant to run down “chase me” baits like a crankbait or a spinnerbait. While practicing for a tournament recently, we figured out that slow baits can actually be fished slow but fast.

Confused yet? This won’t be one of those tales of the goofy but lovable tortoise beating the cocky, annoying rabbit. Making a jig and worm keep contact with the cover and bottom while breezing through large areas quickly looking for active fish does require careful attention and some forethought. It can, however, be extremely effective for finding fish fast and knowing if an area holds concentrations of fish.

The jig is an incredibly versatile lure. It can be hopped, drug, swam, stroked, shook and more, all of which will trigger bass to bite at different times. But day in and day out, just dragging it around cover and on hard bottoms can produce lots of good quality bites on various fisheries all over the country.

Likewise a Texas-rigged plastic can also do a lot. But many folks tend not to throw them when they are trying to find fish fast because they feel they have to slow down too much. There are certain instances where other baits will be a lot easier to fish fast, but a jig and a worm can really let you know if fish are in an area whether the bite is tough or wide open.

Some key ingredients to fishing these typically slow baits fast can be boat position and cover.

Obviously when you’re working an area and you’re not sure where the bass are yet, you’re going to have to work everything. That means the shallow flats, the rocky points, the steep banks, and any available cover you can see. But the first thing to mind is boat position. If you know the water temperature is at a level where the fish can be comfortable shallow. You might not have to work the lure out to 20 feet. You can position the boat closer on a steeper bank, and run down the bank quickly making short pitches, dragging the bait a little, shaking it a little and then pitching again.

On a long flat, you can random cast, pulling it along, stopping it occasionally and then moving again. But you don’t have to sit and painfully work the area because you’re looking for one aggressive fish to tell you there are fish in the area.  Until that one fish keys you into the fact that you’re around the bass, there is no reason to put on the brakes.

Available cover can speed the process up even more. If you’re fishing down a bank that has grass, you work the bait through the grass to the end and then pull up and go again. Or maybe you make precise pitches to openings in the grass in various places throughout your area. If there are laydowns, you can quickly target them with short pitches with the jig or Texas Rig. Shake it a little, pull it a little and then on to the next piece of cover.

Many fishermen are guilty of fishing too slow in areas that don’t have any bass. You’re working it slow, being methodical because you don’t want to miss anything. Yet you forgot one of the common generalities in fishing â€“ 90 percent of the bass are in 10 percent of the water. That may make fishing seem impossible to some, but it’s really meant to make fishing a lot more simple. It basically means fish fast in likely areas and if you’re not getting bit, get moving. You want to blow through the 90 percent to find that 10 percent.

While practicing for a tournament this week, I was guilty of slowing down in unproductive areas, until I got a few bites pretty close together. When that happened I actually sped up. This was the reverse of what I should be doing. But in practice, I want to know two things. Does this area hold a population of fish? Are they keepers? One bite in an area doesn’t make it a great place. One quality bite from a solid keeper can, but not a short fish on one isolated piece of cover.

It’s not enough to just get a few bites. You have to extrapolate from that whether you could catch more if you slowed down. In practice, I tested my theory by actually speeding up and fishing fast after getting some bites. You know what? I got a lot more bites because I realized some important facts. It’s spring. The water is warm, the fish want to move shallow, and they will eat if you put it in front of them. So the faster you fish, the more fish you have a chance to put a bait in front of them.

As you hone in on your areas, you can really work through them quickly to know that a population is present without beating the area up too bad either. Usually when I take a quality bite, I will leave an area and try to duplicate it or replicate it in other areas on the lake.  We were able to do that in practice by fishing contact baits quickly out to the depth range we found the fish active in other areas and quickly establish a few areas where fish were present and active.

Many bass fishing tournaments are won in areas after just one bite in practice. The angler fished through an area fast, took a quality bite, decided the area offered a lot of room for a population of fish and they left. Then in the tournament, they came back and really slowed down and fished methodically in the area because they knew bass were present.

Fish fast with contact baits when the bass won’t chase reaction baits. Then when the bites start, see if you can get a few more fish to bite by fishing quickly through it, targeting specific things in the area like structure, cover, water clarity changes, baitfish, current and other factors. If you breeze through an area and take a few quality bites, chances are you’ve found an area that will payoff with a slower methodical approach.

Don’t be afraid to throw a small jig or Texas rig when you’re searching for bass quickly. You’ll often find fish that we’re apt to chase baits and can stumble into some fine bass fishing this time of year as a result.