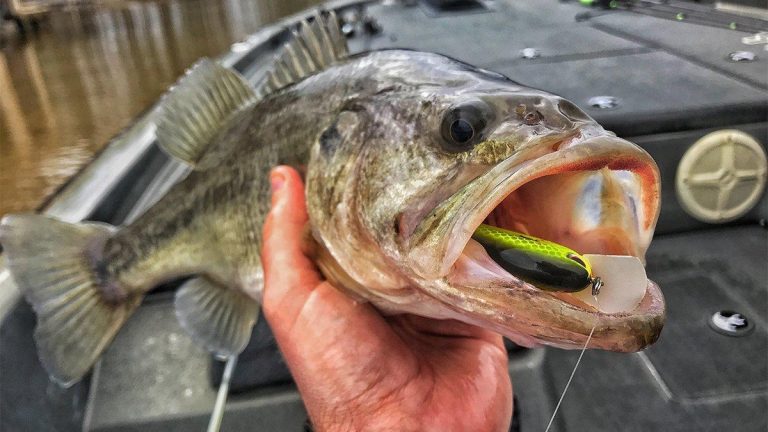 There’s no doubt that prespawn bass fishing is some of the best action of the year. I’ll be honest, though: Many anglers are ignoring some major clues when they catch a bass. There’s a definite science behind successful prespawn fishing and if you’re not physically inspecting each bass you catch, I think you’re missing out on a great opportunity to further replicate your success.

Each time I catch a bass this time of year—when the water temperatures are between 45 and 65 degrees in my area—I make careful note of three primary characteristics. This helps me understand exactly what stage they’re in, which allows me to adjust my gameplan accordingly.

You can learn a lot about the current stage of the bass by taking a quick look at their coloration. I’ve made it a habit to survey and mentally note their color before releasing them back into the water.

Ideally, you’re looking for pale, almost pink-colored bass. This coloration is indicative of the bass recently moving into the shallows which means there are more on the way. In most scenarios, you can continue fishing the same type of areas and expect them to replenish with “fresh” bass for the next several weeks while they continue migrating to shallower water. 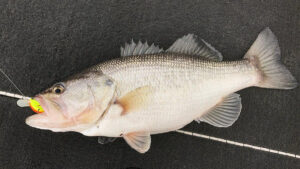 These bleached-out bass have been recently spending their time in deeper water throughout the winter months. In this part of the water column, the sunlight doesn’t penetrate enough to give the bass that trademark green color. When I’m guiding other anglers, I often compare this to humans: We have to be in the sunlight to get a suntan. If we’ve been in the dark for the past few months, we’d be pale, too.

You’ll notice that these pale fish are also the ones that tend to bite the hardest. I’m sure there are different theories on this, but mine is simple: I think they’re dumb as a bag of rocks when they’re fresh. They haven’t seen many lures for several months, their metabolism is ramping back up and they rarely hesitate to choke down a well-placed lure.

On the other hand, if you’ve been pounding traditional prespawn staging areas (transition banks, primary points, secondary points, etc.) and you’re beginning to notice a darker, more greenish hue to the bass, you’re probably closing in on the tail-end of the bite. Whenever I notice this change in color, I know it’s time to start searching a bit shallower towards south-facing spawning pockets. They’re on the move and this darker coloration can be your biggest clue to adapt.

Bottom line: Catch ‘em while you can. If you’re catching pale fish, you’re on ‘em and can expect those bass to hang around for a while. If they’re dark, you might want to start plotting your next move because you may be a step behind.

No. 2: Inspect their body shape

Once you take mental note of a bass’ coloration, it’s a good idea to quickly inspect their body shape as well. While most of your pale-colored bass will be stocky and the females will likely be full of eggs, you can’t always rely on that theory—especially when you’re fishing muddy water. A heavy stain restricts light penetration, which can make bass remain pale even if they’ve been shallow for a few weeks. 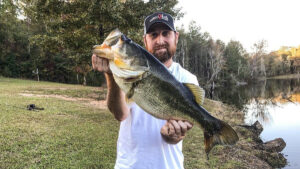 If a bass is fat—even the smaller males—this often means that they’re fresh fish who have just moved to the shallows. They’re usually still in prespawn mode. With the spawn approaching, males have a strenuous job ahead of them and their instincts are screaming at them to feed their bodies in preparation, so their bloated bellies often lead anglers to mistake them for egg-filled females.

Whenever you start catching bass that are particularly skinny and the water temperatures are above the mid 60s, it’s time to start plotting your next move again. This poor physical condition, often partnered with visual sores on their sides, is a telltale sign that they have already spawned and are in full post-spawn mode. These big females may have a big head but their bodies look like a wind sock. This is when you’ll fish areas similar to your prespawn hotspots, with a special emphasis on bluegill beds and early morning shad spawns.

Bottom line: In an ideal situation, you’re catching pale, big-bellied bass. This means they’ve just come into the prespawn stage and are ready to bite. When the wind socks start showing up, it’s time to slow down your approach and rething your strategy.

As the prespawn bite begins to wind down and you start venturing into shallow pockets, you’ll start catching a lot more shallow bass on traditional Texas rigs and other bottom-contact, soft-plastic presentations. When this bite is happening, it’s absolutely imperative to look at the tail of each bass you catch. This can clue you into a major pattern that can be easily duplicated throughout much of your lake.

If the bottom of a bass’ tail is shredded or misshapen and its belly is still prominent, there’s a great chance it was on a bed or about to be on a bed. When I notice this, it tells me one thing: I’m doing the right thing and I need to stick with the shallow-water bite towards those aforementioned spawning pockets. 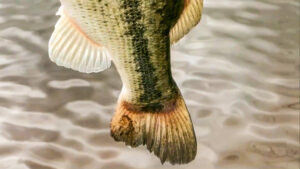 If you catch a bass with a jacked-up tail and its body looks like the wind sock we discussed, it’s probably done spawning and in the post-spawn period. You’ll start having more luck with topwater lures and slow-sinking soft plastics.

Finally, if your bass have clean tails and fat bellies, they’re usually still in the prespawn mode and are slowly making their way to the backs of flat and shallow spawning pockets. This is when crankbaits, jerkbaits and jigs should be rigged on your favorite rods.

Bottom line: Clean tails mean that you’re probably dealing with prespawners and if these same bass have a pale color to them, you’re in business—they’re coming to you. When the tails begin to show bloody sores, you’re dealing with post-spawners and your approach should become a bit more methodical and cerebral.

While there are no absolutes in bass fishing, I’m a big believer in these three visual cues. More times than not, they’re going to point you in the right direction. If you can catch ‘em while they’re fresh and move with them throughout the next few month or so, you’ll have a great chance of maximizing each phase of the spawning period.