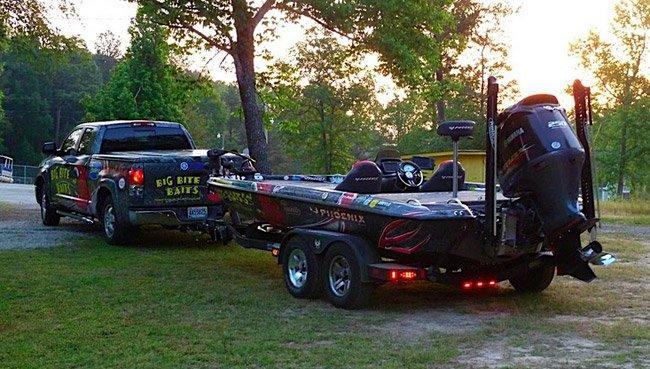 As I’m sitting at the table reading Rolling Stone magazine and eating a $5 Subway Italian sub, the door opens, and moments later Russ walks by and goes straight into the kitchen, opens the refrigerator, and pulls out a bottle of Sobe Black and Blue Berry Lifewater.

Opens the top, and gulps down half the bottle as he spots me reading by my laptop.

“DB, I just feel so dehydrated.”

I’m not surprised, it’s 85 degrees and getting muggy out there.

He will work another three hours before he goes to bed.

I noticed as we get closer to Thursday, the first day of the tournament, he was becoming more animated, more talkative. Not sure if it is how he gets his game face on, or if he is just becoming more use to having a roommate.

“If I room with other anglers, I tend to get influenced by what they are doing, when I stay by myself I can just concentrate on what I’m doing and not what others are doing, saying or going.”

As he stands waiting for the microwave dinner to ding, he starts talking, not sure if it is to me, the microwave, or to himself. You can tell, you can see, the concentration level going up.

“I know I’m missing something, need to find a couple more kind of deals tomorrow … got to get some good rest tonight, tonight is the most important night … lots of work tomorrow, I’m always almost late for registration because I practice up until the last possible minute.”

I’ve been around athletes before and know that this kind of free form thinking, from one subject to another is the mind’s equivalent of starting to dress … starting to put the uniform on.

I say nothing. Just listen. Let Russ work his game plan through.

As he sits down to the steaming plate of chicken fried rice and “Oriental Vegetables” I start to put my headphones back on when I hear him say something. I didn’t quite understand what he said so I asked him, “What was that?”

He looks right at me and says, “Everybody out here is becoming like the same kind of fisherman.”

And I take the headphones off.

Between bites, Russ talks about fishing in a crowd.

“I went south today on the lake, and there were lots of guys down there, it actually is becoming weird if you are somewhere and DON’T see boats around. These guys are so good, they find everything.”

My sub is done, I pick up a pint of ice cream, hold it up to him as an offering, Russ shakes his head no, so I jump on the Cherry Garcia alone.

“It’s almost impossible to find a spot where no one is at anymore.” With that he tosses the paper plate into the garbage, gets another bottle of flavored water out of the fridge and walks outside.

It’s his private time … he’s out there on his iPhone answering emails, making a couple of calls to his sponsors about projects he’s working on, and then, the phone call we all make, the call home or to a loved one … and for Russ, that is Jill, his wife.

When he comes back in you can see he is more relaxed, he might not tell you this, but in my three days with him I can tell Jill has a calming effect, just like my wife Barb does on me.

The game face is now smiling.

I tell him I’m having a hard time picking out the music for this story, struggling, and then he looks at me, and smiles and says, “Kenny Rogers’s The Gambler would be perfect.”

And then he goes on to explain why that would be his song choice.

“There is always a point in the tournament when you have to make an adjustment for whatever reason. To me the MOST IMPORTANT thing that I have to have, even before the tournament begins, is an area to adjust to … a back up if my primary areas go south on me.”

Plan B, some plan for it, others don’t. You know who’s who when you look in their eyes, listen to what they say, and it always begins with these words, “Well I guess it’s time to just go fishing.”

And then Russ tells me something from his heart, and not from the PR book on how to talk to dudes sitting with their hands on a keyboard.

“If I focus on an area I know where I can catch 13 pounds a day, but also know that after a couple of days that area will run out, and I have no adjustment plan, that’s just fishing for a check, make the cut, go home.”

I say nothing, whatever he says next will tell me exactly what kind of competitor he is, I have been around hundreds of the most talented athletes/competitors on the planet, his next few words will mark his place in that line.

Russ takes a drink, writes a few notes in his blue notbook, circles something on the Lake Murray map, I’m just waiting, waiting…

“Or if you know conditions can change and that the fish will move to the next available cover, and I KNOW where that next cover is going to be, if I planned for that to happen, made my adjustment here (and his pen points to his notebook) and I can make that adjustment and move to that area…”

He takes another sip of water, holds the water bottle just a few inches from his mouth, moves the head of it up slightly in an invisible salute….

“…if I know that area and have planned for that adjustment….THAT’S fishing to win, fishing to WIN.”

And with that I type simply this: Up Front.

Not champion, not Hall of Fame, but Up Front in the line of professional athletes that I have covered. Moving in the right direction with the right stuff, what becomes of it is all Russ. But I know this, most times when I hear stuff like that, within a short period of time they are raising a trophy above their head.

I judge all athletes by a guy I used to work with and became friends with, Pittsburgh Steeler Hall of Fame Linebacker, Jack Lambert. I asked him once what it took to be a champion, and all he said to me was one word.

Your place in the line depends on how close you come to saying that one word.

Because I have a story banging around in my head, I’m up at 3 a.m. writing, at 5:30am Russ comes out of his room, walks outside to unplug the electrical cord running to his boat charger, comes in to the kitchen hits the Keurig coffee maker button, grabs a pop-tart and pours some Parkay butter on it and tells me of his game plan today.

At 6:15am, he walks out the door, for another day of practice.

As I stand in the back door and watch his taillights disappear down the dirt road, only one word comes to mind.