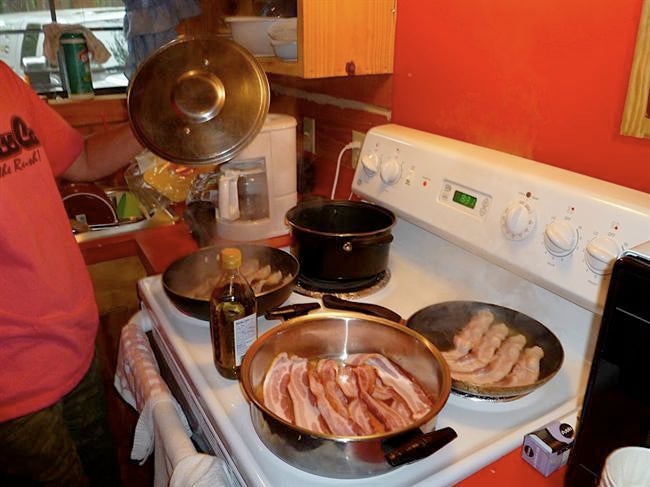 possibly the conquest of the Universe, Time Travel, and the Buffalo Bills

My food pyramid is round.

Somewhat donutesque, if you can believe that. I believe in the Circle of Eats.

In my round food pyramid, I have two food groups.

My round food pyramid has food rules.

I never eat anything I can’t spell.

I don’t eat bait. If

trying to get me to eat, don’t bother.

don’t care what kind of legs it has, if it has more than FOUR, it’s yours, not

I don’t eat seeds. If

up, I’m not going to eat it while it is a baby.

If the food has been featured on Oprah, I won’t touch it.

And finally, the most important round food pyramid rule:

because I don’t believe that the government is good for me.

I eat a balanced meal three times a day all day long. I try not to snack so I just eat all the

I am a fruit junkie and constantly eat fruit filled jelly

food pyramid, and that would be, Bacon.

I became a connoisseur of the miracle food that Bacon is

when I discovered that if you sprinkled enough of it on leaves, you could

actually keep a salad down. An L & T

If Bacon can’t make what you are about to eat better, don’t

eat it. There are two exceptions to that

rule that I have discovered though. Bacon does not add much to Ice Cream, and if you don’t mind chewing your

frozen margarita it’s not all that bad, but some people may be adverse to

My wife doesn’t believe me, but all she would ever have to

she’d have my attention forever.

There is nothing on the planet more romantic than Bacon done

So, this week because T-Bend Louisiana is over yonder from

down yonder and that over here, in, over, there doesn’t seem to be a lot of

places to have breakfast of either food groups, walk-in or drive-thru, so the

the Lintner’s cabin for breakfast eating.

History of the Planet.

Keri Lintner, it seems, has been harboring a secret bacon

Sit yourself down to get ready for this bit of Bacon news.

There is a real, very real chance I could get that knighted

them two kids over there and just add Bacon.

with this miraculous Bacon concoction, “db in my family growing up with

the Filipino heritage there was always a pot of rice on my parents stove. If we had chicken for dinner that night, the

leftover chicken was added to the rice and we had it the next day, or for

Somewhere along the line, Keri’s parents must have had a

real late breakfast, and had some Bacon left over, and dumped that into the

And magic was born.

And dudes, let me tell you this for a fact, if the first

cavemen would have come across a pot of this stuff first, before they saw the

women cavemen in the other cave, say if the pot was midway between the two

caves, the human race would have had very few laps to itâ€¦

So here, for the total betterment of Man/Womankind, world

peace, travel to the galaxies, and the Bills winning the Super Bowl here is

Keri’s secret recipe (and what I consider my shoe in for the Nobel Prize).

no idea how to cook or what it was she was saying. db’s First Ever attempt to write a recipe

(full disclosure to keep the food police channel off my back):

bacon and do whatever you have to do to make the bacon crisp.

that whatever you did to make the Bacon crisp it involved GREASE. 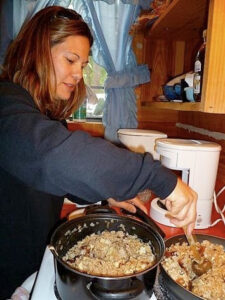 to be when we get to the end.

if I’m wrong the people who make skillets may start yelling the Libel word).

you didn’t toss and now toss it in to whatever you believe a skillet to be, add

some stuff from the produce section of your frig, Keri recommends Onions and

Garlic, didn’t say how much but if you actually have onions and garlic in your

frig you get the gist. Whatever sautÃ©

means, do it now.

Six: Get some eggs,

forgot to ask how many, pound them into pre-scrambled eggs and then pour the

either hot olive oil or more of the bacon grease you didn’t throw away. Once the eggs go from runny to not runny get

them out of the pan and start chopping the stuff into bite size scrambled eggs.

Seven:   At some point

take number five, and number six, and mix them together

that has been on Keri’s stove all night, put that in a pan, then dump in both

six and seven, put a lid on the concoction and let it cook 15-20 minutes, or

the crispy bacon you made about a half hour ago, don’t make it into bacon bits

place. Dump it in what is now six, seven