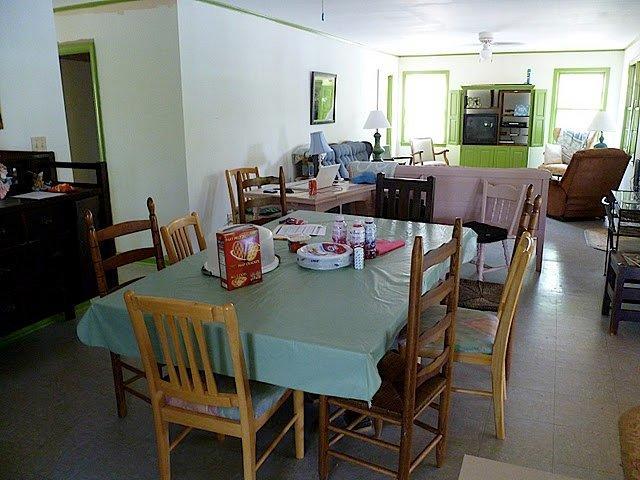 I’m sitting in the rental house I’m sharing with Elite angler Russ Lane.   Behind me I hear the back door open, hear the sneakers walking down the hall, getting closer, closerâ€¦

And well he should be, he left here to go practice at 6:32 a.m. THIS MORNING.

A few ticks short of 12 hours on the water.   He doesn’t say it, but I know he is going to do the same thing tomorrow, Tuesday, the second day of practice.

Let me tell you how this works here â€¦ you see that photo over there of the inside of this joint â€¦ when Russ comes in and starts working he gets the dining room table â€¦ what with him being a hard working man and me being, you know â€¦ a writer.

I get the little pink table off to the side.   As it should be.

Most of the quotes you are going to read are Russ’s â€¦   I am not here to get in the way â€¦ I’m here, to be HERE, that in itself is groundbreaking, and if it is ever going to happen again, I need to be a sounding board, not a questioning board.   So as Russ is walking around the kitchen fixing something to eat â€¦ I just listen â€¦ and watch the sunset through the windows behind him.

“db, man I’m beat, these back-to-back tournaments can get you,â€ he said. â€œThe last hour or so in the boat I was so tired, I found myself almost nodding off. Told myself â€¦ time to come in.”

He turns and looks out the window, it’s the magic moment right before complete sunset, that little bit of time when the sun lights it up one more time just to let you know who’s the boss here.

“I feel guilty about coming in, it’s still light out, I should still be out thereâ€¦”   His words drift off as he watches the ripples cross the cove water a few feet from the kitchen window.

By the time he washes up and comes back, the sun is in full sunset mode, he may have missed TEN MINUTES of full sun today. And he feels guilty about that.

“I’m in here but there are others still out there,” and he shakes his head, the scolding now going on just inside.

After a â€œ10-minute-on-highâ€ microwave dinner and a beer, Russ disappears into his bedroom, I hear papers being shuffled, and he comes out carrying his blue notebook.

A paper map some people can open and then fold back correctly.   I can’t.   I think GPS was invented specifically because of the map folding issue.

Russ sits at his corner of the table, and I watch as he unfolds the Lake Murray map thing and starts writing notes in his notebook. I ask to take a photo of this, every picture I take with him in it, or of his stuff, I ask first. I am the intruder here, not Russ, I do not want to get in the way of his livelihood, I get a paycheck no matter what.

Russ has to win his. 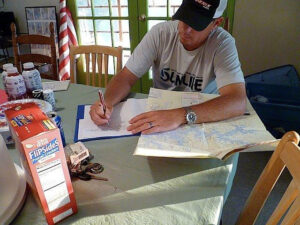 The notes Russ makes, are like a shopping list for him.   Out on the lake he’s afraid he may forget some things he wants to do, and he doesn’t want to zoom around out there willy-nilly, I can’t tell you what it says, but is basically a Game Plan.

If he’s out there, and he spots this, he wants to do that, there are reminders to himself to look for certain things, conditions on the lake. Russ game plans each event, and brings the playbook with him out on the boat.

“It’s so that in the heat of competing you may forget little things you wanted to do, but I can stop, open the book, read the notes I wrote to myself, and get my head back in the game. Regain my focus.”

Russ was a professional minor league baseball player. He understands and is used to game plans.

Think of this for a minute, pretty much every other athlete who competes in competition has a COACH somewhere involved in the game, who can inspire them, tell them what they need to do, tell them what it is they are not doing to win â€¦ coach them.

The Elites, compete alone. There’s no coach in those boats â€¦ except Russ’s blue notebook.

So Russ sits for an hour or so with his iPhone and the Navionics U.S. & Canada app, and this huge foldout paper map of Lake Murray, constantly comparing the two.

“I also use Google maps and Bing maps which seems to be updated more,” he said.

Let me tell you what Russ, and all the other anglers are faced with.   Out there in the sunset, a few feet behind were he is sitting looking at maps is Lake Murray.   The rental joint is on some cove of it.

Today, Russ told me he “covered 75 miles of water.”   That’s slow cover, not the speeding up and down the lake kind of cover.

“Practice isn’t about catching fish, it’s about finding an area that will work for you for 3 days of the tournament.”

On day one he was on one end of the lake “looking at the resident fish.â€ Tomorrow he’ll be down at the other end looking at the schooling fish. Which I think also live, or you know, reside here, but I don’t say anything, seeing that he’s the pro, and I’m just the word guy.

After a bit he somehow manages to fold the map back up in the right way, takes a shower, and then walks out onto the dock that belongs to the rental joint and starts talking on his phone.

It’s the last phone call of the day.

And it’s the same phone call I make, probably the one you make too.

Russ is talking to his wife Jill. Barb calls me every night to say goodnight as well.

Russ has told me how much he misses Jill.

I tell him how much I miss Barb.

We both just nod, and look down to the floor.

And day two of My Week as an Elite â€¦ roommate, begins.