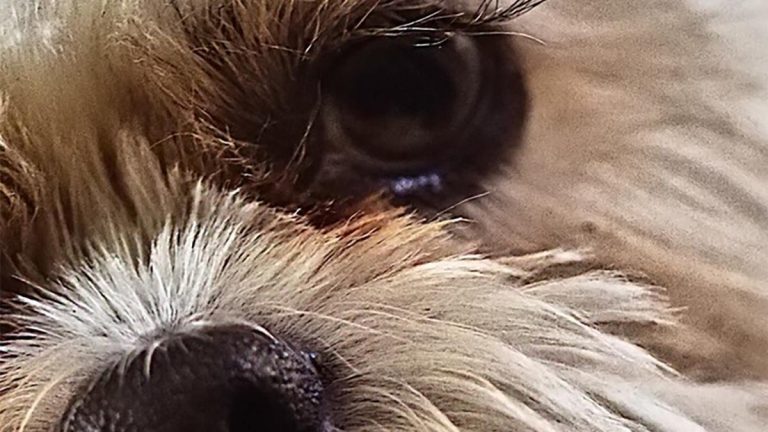 “Dogs are the leaders of the planet. If you see two life forms, one of them’s making a poop, the other one’s carrying it for him, who would you assume is in charge?”

And as I slowly open my eyes, this is exactly what I see.

Our Shih Tzu reaches out and licks my nose.

I jump up from bed and run downstairs, the door to the garage is open and as I flip on the light Riley runs past me and to the middle of the garage floor, lays on his back and starts wiggling all around.

Wiggling all around on several packages of Berkley Gulp Alive bait.

My wife’s dog now stinks like a Gulp minnow, or worse, Iaconelli.

As does my favorite recliner, half the new couch, two-thirds of the living room carpet, most of the runner on the stairs, and the entire comforter on the bed.

Note to self, call St. Croix and get advice on how to get dog pee off the cork rod handle.

And Riley comes, sits at my feet, tail wagging, one eye looking one way the other eye looking somewhere else, smiling with tongue hanging out and even though he does smell like drop shot, I reach down and pet him.

We have a dog in our house.

We love him, and he loves us.

“…on every highway I’ve been down…”

“A dog is the only thing on earth that loves you more than he loves himself.” 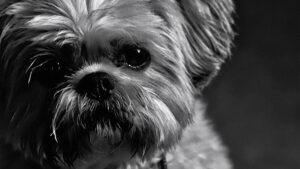 “Whether they’re KVD or a co-angler, they all get this greeting.” / Photo by Don Barone

Riley has been to several Bassmaster Elite events and a couple Opens, his tail wags the same whether he sees KVD, Skeet, K-Pink or an anonymous co-angler, even one who loves cats.

If dogs were humans they would be better humans than we would be dogs.

I’ve heard that all dogs go to Heaven, and that’s probably true for dogs, not so much for their owners, and I use “owners” loosely because I have long ago lost being in charge around here.

I didn’t want a dog in the house, I voted against it, I’ve never lived in a house with a dog, I was out voted 2 to 1.

Riley came into our lives when he was about 8 or 10 weeks old, I was covering my first ever BASS event, we were up on Lake Champlain and I called home to see how things were going.

“As soon as he came into the house he went into the dinning room and pooped on the carpet.”

I’ve lived a strange life but have never had anyone answer a question of mine with the answer Barb just gave me.

And don’t hold me to this but I’m thinking it is quite possibly the first time our dining room carpet has been pooped on, and we even lived in California.

“He was just running around crazy then suddenly just dropped on the floor and went to sleep.”

“You sure, is he dead, do they die if they poop ion the house.”

“He’s fine, oh by the way, I’m not sure I can get the pee off your suede bedroom slippers.”

Once again a sentence I’ve never heard before.

“…every storm that turned me around…”

“The better I get to know men, the more I find myself loving dogs.”

I woke up today to a nasty post on my facebook page, some guy called me, “a poster boy for BASS,” and said our coverage of an event sucked and that I should “get a haircut.”

I also woke up to Riley licking my hand.

I also woke up to a tail wagging.

I also woke up to unconditional love.

I’m thankful for Riley, that tail wag, that lick of my hand, saved my day.

Riley, all dogs actually, don’t ask why I’m mad or sad, there is no judgment, just love, unless I forget to give him his chicken for pooping outside and not in the dining room anymore.

He loves to go to the “tree” which we now have to spell, T-R-E-E as Barb and I negotiate who’s turn it is to take him to it.

It’s not scientific but I swear his ears pop up whenever anyone in the house says any word that begins with “T.”

This morning I said, “Toast” and he was halfway down the front hall to the outdoors.

Say “ride” and he spins in circles.

Say “squirrel” and mid-licking anything, he’s at the front door barking.

I am thankful for all of this, and more, when it’s just me and the “Riles” in the house I talk to him, he listens, sometimes with one ear, sometimes both ears.

Sometimes just listening is all that matters.

“…oh, it’s better than I could have planned…”

I’m thankful to Riley for opening my eyes to animals off all kinds, before the “Riles,” I pretty much never thought about animals, they were just part of the outdoors, I see them totally different now, I see them as living, feeling creatures.

I have five audiobooks I listen to as I drive around the country, two on UFOs and aliens, three on dogs and animals and how they think and what you learn from their actions.

I’m thankful for dogs who seem to always see everything as new.

Birds in the sky, new everyday.

To have every day, every step, every sniff be full of amazement.

Walks with Riley make me stop and look around, see the world new, watch birds in the sky and leaves on the lawn.

And I’m thankful for that.

“Dogs just need you and love, that’s all.”

I am certainly thankful for my family, for my life, for my career and freedom, but Riley, and your dog I’m sure you know, adds the sweetness in life.

Be thankful for the sweetness.

If humans had tails it would be a more honest world.

Right now, I’m getting the look, somehow Riley knows how to tell time and all I have to say is, “Wanna go for a walk,” and pure joy fills the house. 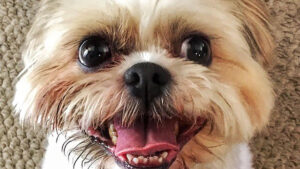 “I have to pee, either at the tree or the living room. It’s up to you.” / Photo by Don Barone

Furry joy this Thanksgiving…and every day of the year.

I thank God for furry joy.

And I thank Riley, and all dogs, who have taught me so much.

For all dogs, who have made me a better human.

“Dogs are not our whole life, but they make our lives whole.”