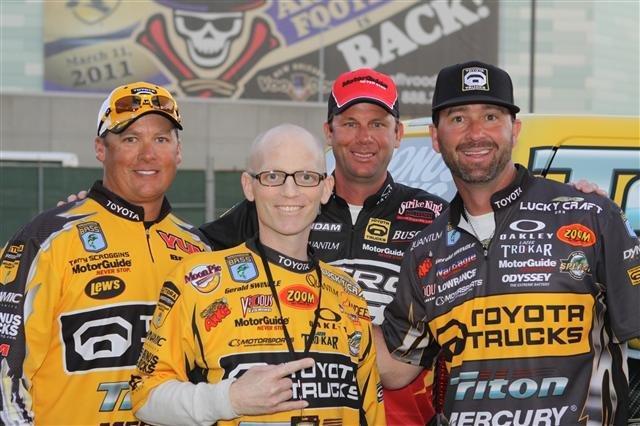 Be sure to read parts one and two for the whole touching story of our friend.

“Somewhere beyond the sea …“

Dateline:  Where rests the soul

Angel & Hero, his final journey.  As he told me, when I last talked to him, “from my wife’s and daughters embrace, to God’s embrace.”

And then he asked me this, “db I am a very religious man and looking forward to God my savior’s welcome, but db, what if there isn’t really a God, or heaven, what if, what do you think.”

I never answer that question. But I have never been asked it by a man who deep inside, knew time was the one gift B.A.S.S. & Wired2Fish couldn’t give him.

I told him, I thought he, was God.

In an empty Sheraton Hotel restaurant, I reached across the interview table, and held his hand in mine and said, “God is love, God is spirit, is forgiveness, is laughter, is joy, but above all to love, and to be loved is to have the heart of God beat in your chest.”

Kevin: “I don’t care how I sound now, if I want to tell all my friends and family that I love them, I do now. I tell them now that I love them. I’ve never done that before. And they, they told me, they love me.”

And Kevin, my friend, that is heaven.

“… somewhere waiting for me …”

Up until the very end, when there well could have been hate, understandable hate from a 34-year-old family man dying from cancer, there was only, love.

From his deathbed, Kevin Oldham called Terry Brown, the Wired2Fish President who with others at B.A.S.S., put together Kevin’s magical few days at the Bassmaster Classic in New Orleans.

Terry was at a 60th birthday party when the call came, and didn’t have his phone with him, left it in he car. When he got back in to go home with his wife, he saw he had a voicemail message from Kevin, so he hit play, and heard this:

“I just want to say I love you very much.”

Terry is playing the message through a speakerphone for me.  Kevin’s voice is not the voice of my interview with him, it’s weak, lot’s of pauses to catch his breath, strained.

I also hear the tears of Terry as he listens to his friend, say goodbye.

I can’t breath, takes everything I have to be professional and try and write down the quotes, what Kevin says hurts, but it is the silence from my friend Terry that is wiping me out.

I put quotes around that because that is what I have been trained to do, but I have no idea if it is exact or not “¦ a man about to die is thanking someone for putting SMILES ON HIS FACE.

And then the most remarkable sentence I have had the privilege of hearing in almost 30 years of doing this stuff:

“… we’re at peace, just waiting for it to happen in just a matter of days, but I just wanted to call and tell you, I Love You.”

And those were the last words I ever heard from Kevin Oldham. Fireman, Husband, Father and Inspiration.

After Terry and I both caught our breath, Terry told me, in a voice filled with emotion, filled with discovery of who he is inside, said, “db, Kevin and I will fish again, someday, when I get to take him on another trip, this time to fish God’s lake.”

At the end of my interview with Kevin, he told me of a promise he made, and I in turn made a promise to him.

I couldn’t live up to my promise, which was this – because of the high medical bills his family faced they had to cut some things out of their budget.

“db for the first time in almost forever I had to stop getting Bassmaster Magazine. We just couldn’t afford it.”

I told Kevin, on the spot, I would get him a subscription to the magazine, “Consider it done, dude.”

Kevin then gave me his address in Pleasant Prairie, Wisconsin.

I never had a chance to keep my promise.

But Kevin buddy, know this, I will be sending several subscriptions of Bassmaster Magazine to:

One subscription for each of the five Fire Houses of the Waukegan Firefighters Local 473, Kevin’s brothers and sisters of the fire, in the hopes that while doing the many philanthropic events they do, that they come across five young children who love to fish, and they give them the magazine in Kevin’s name, and that his love for the sport will continue in the children of Waukegan.

Then this promise from Kevin:

“I told my wife, Katie, that when the time comes I promise I will be there in heaven waiting for her and my two daughters, Stella and Evelyn, I’ll be there with open arms, to embrace them and never, ever let go “¦ again.”

One promise I know that will be kept.

It was an honor.

For that last hug you gave me as we ran into each other in the New Orleans Airport the morning after the Bassmaster Classic.

And for what you whispered in my ear.  “I love you man.”

Love you too, dude.

“We’ll meet beyond the shore“¦”