Relationships were overly dramatic and serious during the high school years. Or at least it seemed to me with most of the young ladies I dated while growing up. They seemed to think the whole companionship thing took a lot more effort and forced focus than I did. If you weren’t talking with them on the phone 24/7 or displaying your affection for them every moment you were near them, it was a monumental meltdown with the changing of the wind. I never grasped the passion they had for dating in high school until much later in life.

Fishing, however, had an entirely reversed grip on me, one that I’ve often found now to parallel what I saw as a somewhat “clingy” and overbearing relationship growing up. In other words, my passion for fishing carries me to the brink of insanity or at least the point of complete disconnect where I no longer want to be in a relationship with it. If you fish long enough, you will reach that point where you come back from several tough trips in a row and decide it’s time to put all the gear on eBay and take up golf or something else less demanding.

After all, fishing isn’t luck, or so we seem to convince ourselves when we reach a certain level of tackle accumulation. How is it possible to own a $40,000 boat, $3,000 of electronics, $10,000 of rods, reels and tackle and still not be able to catch a bass? I’ve been studying the sport and the anglers in it for the better part of two decades and one thing I’m certain of now, we don’t know as much about fish as we think we do. And that typically becomes apparent in the fall transition periods.

There is a time when the fish are transitioning from summer to fall feeding zones and then again from fall to winter feeding zones. And the weather can grey the areas even more, making finding and then catching fish a monumental task. If you’re an angler like me that prides himself on being able to not only find bass but also figure them out, when you don’t for a trip or two, those little demons on the shoulder pop up to raise some doubt about your manhood and your ability as a hunter/gatherer.

Some guys need a break. Others need a distraction. For me I need a distraction to give me a break from being the fish snob that I am. The fact is, that to some degree, we’re all fish snobs. The bass guys chunk crankbaits and pitch plastics for bass, the crappie guys spend their time spider rigging and shooting docks for crappie, the catfish guys set limb lines, trot lines and cast big dead parts for big bad cats, while the trout guys go light line, light fly and sight fish their way to more trout.

We get locked on our quarry of choice, and we become singularly focused on the bass, crappie or trout at hand. We are driven to catch more, bigger and better fish every time we go â€“ haunted by memories of trips of past. Our ability to find and catch the fish of choice somehow defines us as an angler, as a person. Or so we let ourselves believe. When in actuality we lost sight of the thing that drew us to the fish in the first place. It’s the unknown.

The unknown drew us in. The more we do it, however, the more it can drive us away. The unknown might simply be not knowing how big a fish we will catch, how many fish we will catch or where we will catch them. There is unknown from lake to lake, spot to spot, and cast to cast. That unknown fuels our fire and extinguishes it if we let it. Because the unknown can empower you or haunt you depending on how you let it affect your fishing.

So I recently had a few bad outings bass fishing. Catching a 4-pounder and nothing else in 5 hours of fishing. Catching a few dinks and no keepers. And one outing, for 4 hours, never having a single bite. That doesn’t seem like a big deal. But when you live on a premier fishery and you have had many experiences on said fishery the same time of year that suggest you should be catching them, you start to feel that doubt.

So what did I do? Switched gears. I pulled the bass rods out of the boat and stood them up in the corner of the garage and reached for two wispy but wiry spinning rods with tiny reels then respooled them with bright white and yellow lines and small jigheads with curly tails on them. I pulled crankbaits and jerkbaits in exchange for curl tail grubs and hair jigs. A filet knife, some Ziploc bags and a net and I was out the door to meet a buddy for a day on the lake.

“I’m mad at the bass right now,”  I said on the phone call to Terry Bolton, “You want to go fishing for crappie next week?”

“I’ve been catching quite a few lately and the bass fishing isn’t really swell right now so let’s go,” he said.

So we got up early and hit the lake recently for a day of “relaxed” fishing. No agendas. No unnecessary stress placed on our own psyches to be all we can be with an Alabama Rig or a jerkbait and catch huge limits of bass. Just a few little spinning rods, a handful of small jigs and an open livewell lid.

The first crappie hit the livewell and it was a beautiful sound. A big smile washed over my face and I was back. My passion fulfilled, my energy for fishing renewed.

“I used to be a pretty good crappie man,” Bolton said of his days guiding on Kentucky Lake. “About this time of year, I couldn’t tell you what the bass were doing because I wasn’t chasing them. There were no tournaments, and I was so addicted to catching crappie with a jig, I couldn’t make myself pick up a bass rod. Somewhere along the way that changed, but I’m having fun and not even thinking about bass fishing right now.”

We launched the boat a bit after sunrise; no hurry in our step and for a moment we stopped and just appreciated the fine calm morning we were experiencing. I had forgotten that I get so driven in bass fishing that I can’t just enjoy a beautiful morning because my mind is spinning with locations and presentations.

We hopped from pile to pile of scattered brush on isolated areas away from the bank along Kentucky Lake’s many bays, points and humps picking up a scattering of crappie here and there. Nothing fancy at all about the approach. Reels spooled with 6-pound monofilament or 8-pound braid tied to 3/32 or 1/8-ounce jigheads that we tipped with either white or chartreuse curl tails. The technique wasn’t anything special. Idle around until we found a nice piece of brush on the Lowrance HDS, drop a buoy, spin the boat and cast. 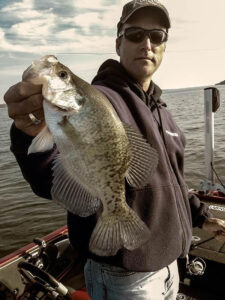 When the jig hit the water, we’d let it go down until we were on bottom or near the cover. A couple of casts was all it usually took to catch a fish or find the brush that was holding the fish and then we’d work around it with ultra slow presentations

“I’ve said for years that a good crappie won’t let a jig get hung in the brush,” Bolton joked. If you cast a jig and let it sink down near a piece of brush, some sort of fish should grab it if he’s around.

It was fun. It was pretty simple. It was rewarding and fulfilling and ultimately it will be filling for me and my family who love to eat fried crappie with sides of coleslaw and hush puppies. Those fish will feed our family for a few meals, but they fed my soul for the whole season. My fishing coffers were overflowing again, and I couldn’t wait to be on the water again as I pulled the boat out for the day.

I had a feeling of being in high school and what some of those girls maybe felt about my lack of attention and unwavering passion for them as a nerdy 17-year-old.

“So Mr. Bass, I’ve decided not to break up with you just yet, although I do think you could pay more attention to me and my offerings and give us the time of day when we’re near. I mean after all, that’s part of a healthy fishing relationship. Because if not, don’t think for a second I won’t start seeing more of one of your cousins from the panfish family.”

Maybe that’s a little overbearing, but I guess a break from your significant other is what a fish snob needs every now and again to renew the passion. It’s okay to fish for other fish. 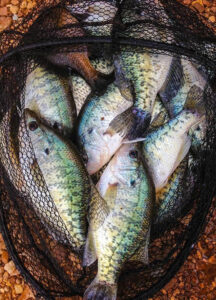