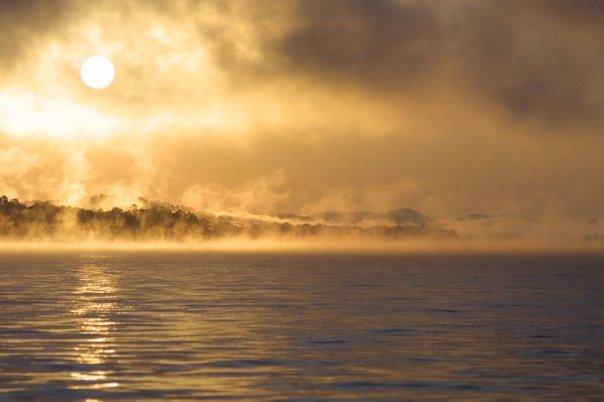 This week I was fortunate enough to be invited to spend a few days in Arkansas at the beautiful Mountain Harbor Resort on Lake Ouachita near Mt. Ida thanks to the good folks at Frabill, Lund, Marcum, Rebel, Hobie and more. I love this part of the country. I lived in Arkansas for a 12-year stint and for a few years off and on as a child. My son was actually born in Northwest Arkansas.

So I always love to come back to the state. But the fishing here is what gives me the fondest memories (my son’s birth notwithstanding). And it’s not always because of the fishing. Makes no sense to some, I’m sure. But if you’re an avid angler, it probably makes perfect sense.

The fact is being alone in a secluded part of a fishery anywhere in the world allows for a sort of decompression and it seems like if you move slowly and quietly, you open yourself up for opportunity to experience life beyond what you see on a digital screen or read about on your cell phone.

I’ve been fortunate to fish all over the world for a variety of fish. But for some reason, many of my fondest memories are in simple places like Arkansas, Alabama, Kentucky and Wisconsin. Sure Costa Rica, Mexico, Hawaii, and even California seem more wild and out there, but it seems like when I have one of those “outdoors experiences,” it’s in the simple places like Lake Ouachita in Arkansas.

On a striper trip with some lifelong friends on Lake Ouachita back in 2001, we were idling out to a spot offshore where the stripers had been schooling early in the morning. It was early May and the water was cool but not cold and the afternoons were warm but not hot. This made for some dynamic fog. With the sun rising, the fog seemed almost on fire this morning. My buddies nudged me and said, “man, you probably should get your camera out.” Glad I did.

On another trip on Lake Ouachita, I brought a buddy who’s biggest fish ever was a 6-pound bass and convinced him we’d break that in the first morning throwing topwaters for big stripers. As luck would have it, the first fish we saw surface, he made a good cast on it. He twitched his Heddon Super Spook back and forth and a tidal wave came over it. The last thing I saw was a tail the size of a lampshade going back into the water.

He fought the fish as it stripped drag off the reel at burning speed. Moments later his heart sank. The fish wasn’t pulling anymore. There was just dead weight like a snag. In fact it was a piece of standing timber the fish had wrapped him in.

He pulled trying to free it for 10 minutes before relinquishing the rod to me to break the line. I pulled as hard as I could and got about 2 feet of line back. Then pulled again and got another 2 feet. At this point I figured I had broken the top of the tree off and was deep water salvaging it for a nice driftwood ornament. Then the weight changed dramatically and I realized what I was reeling up from the abyss was something alive.

I handed the rod back to him. He cranked her up, and wouldn’t you know a 30-plus-pound striper was on the other end. She had wrapped him in a tree and just wore itself completely out before giving up. It was an emotional roller coaster of a catch and one neither of us will ever forget.


Yesterday I had another lifelong memory on Lake Ouachita. As Scott Glorvigen and I fished for anything that would bite in nasty frontal winds, we heard some dogs barking in the distance. In this part of the world, this time of year, that means one thing – a deer is being pursued.

Scott nudged me and pointed out one of the dogs on the bank. Then points in the general direction and said, “Well there’s the deer.”

I immediately scour the woods for signs of a massive wildabeast of a deer. I can’t focus on it and find it. Then I realize about 100 yards off the bank are a set of antlers and a small head bobbing across the surface. From a distance it just looked like a big duck with a tree branch on his back.

As it swam away from the pursuing dogs, it swam closer to us.

As he got closer he changed his angle and started towards the nearest bank away from us and away from the dogs. I’m floored at how fast a deer can swim with those little shoestring potato legs they have. This thing was motoring, putting out a small wake as he did. He’d have run down a duck. Being a duck out of water so to speak himself, I found that pretty impressive.

Not nearly as impressive as him bounding out of the water mere yards in front of me. Wow! 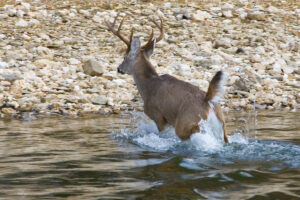 I’m sorry but you’re not going to see that in Cincinatti or Philadelphia or Orlando. You’ve got to get off the beaten path a little bit. Where the world isn’t laid out for you. Where wild things live if you want to have moments like that.

I find the older I get, the less time I make for this part of life with all the hustle and bustle of kids, work, and … well … life in general. So getting to come back to place fond in my heart and have another experience seared into the memory banks was worth the hustle and bustle and 800 miles of driving.

Don’t let the pursuit of the fish make you miss the memories in the simplest of places.

Editors Note: You can see more photos of the deer at our Facebook Page.