Paul Elias’ Triton emerged from the fog on the final morning of the FLW Tour Open on Lake Guntersville like a pirate ship in some Hollywood blockbuster. The sound of his massive assortment of swimbaits hitting the water was like the “ploosh” of a cannon ball – the shot heard round the bass fishing world so to speak. As Elias heaved the massive mess of wire and rubber that is now known to us all as The Alabama Rig, the bass fishing world was changed forever.

With striking similarities to the standard umbrella rig that is used to troll for all sorts of game fish, one wonders how a castable umbrella rig wasn’t thought of before. In an industry where almost everything has been done, sometimes, redoing it is the best option.

Andy Poss, the creator of The Alabama Rig, admits that the finished product is a far cry from what he started tinkering with 14 months ago.

Weighing about 3/8 ounce, the rig alone is made up of five metal rods extending from a plastic head that is anchored to a single metal rod running in the opposite direction that is used to make an eyelet for the main line to be tied to.

At the end of each of the five rods, Poss formed an eyelet that a heavy duty clip is attached. From here, it’s up to you.

“You can throw anything you want to throw on it,” Poss said. “You can take The Alabama Rig and throw five topwater baits on it or put your lead heads on it and fish it as deep as you want to fish it.”

Having only been on the market since the first of July, Poss explained his expectations for the rig.

“I knew as soon as the water started cooling off on the Tennessee River and the fish started suspending and primarily feeding on shad, it was just a matter of time before one of these first few tournaments in the fall would be won on it. That’s how much confidence I had in it.”

If you want proof that the Alabama Rig can catch fish then look no further than the FLW Tour Open on Lake Guntersville and Paul Elias’ near record breaking performance. Jumping out to an early 5 pound lead on day one with more than 26 pounds on the toughest Lake Guntersville in recent years, it was apparent that Elias was on to something. That something was the Alabama Rig.

The next day it was learned that a few others in the top 10 were also throwing the rig. By the morning of day three, the Alabama Rig had made its way to the front deck of over 3/4 of the top 20 anglers’ boats. Casey Martin caught 20 pounds, 9 ounces behind Elias to win the co-angler championship on the rig as well on day three. On the final day, nearly everyone in the top 10 was using it.

Weights drastically grew throughout the tournament as the Alabama Rig ran rampant through the field. On day one around 16 pounds was in fifth place out of 146 pros. By day four, 5 of the 10 that went out had more than 20 pounds, all on the rig.

Never has a tournament been dominated and so drastically changed by the introduction of a single bait. The Chatterbait, Senko and other instant mainstays all made catching fish easier but the Alabama Rig seemed to trigger a class of bigger, older and more educated fish that simply wouldn’t bite anything else.

The man that figured out the Alabama Rig and how to catch these G-ville giants better than anyone else was Paul Elias. Averaging more than 25 pounds a day, Elias put together a perfect game plan that consisted of the Alabama Rig, current, a variety of baits, various retrieves and his Hydrowave.

Elias fished primarily two bridges during the event. These worked as funnels to maximize the effect of whatever current ran during the four days. Once he had the general areas picked out he proceeded to find sweet spots, ambush points that the bass could use as they waited for the current to bring bait by.

“Most of the fish were relating to big rocks and high spots in the middle of the bridges. I also caught a few off the bridge pilings,” said Elias.

The weight of his lead heads varied depending on the depth and speed that he was fishing. Throughout the week, he used rigs with 1/4, 3/8 and 3/4-ounce heads. His soft plastic of choice was a Mann’s Hard Nosed 5 ½-inch swimbait.

Bass in the fall tend to suspend as they feed on shad that aren’t relating to the surface or the bottom. These fish are typically hard to catch and another key reason that the Alabama Rig played such an important role in the event. The trick was letting the bait fall to where the fish were and keeping it in the strike zone all the way to the boat.

“All the fish I caught were suspended off the bottom and I was counting down on almost every cast,” said Elias. “I had to vary my retrieve to trigger them sometimes. I learned something new every day.”

“Counting down” means that Elias was able to calculate a rate of fall for the rig depending on what size heads he was using at the time. Once he knew how far the bait would fall per second he could then count his bait down to the desired depth. 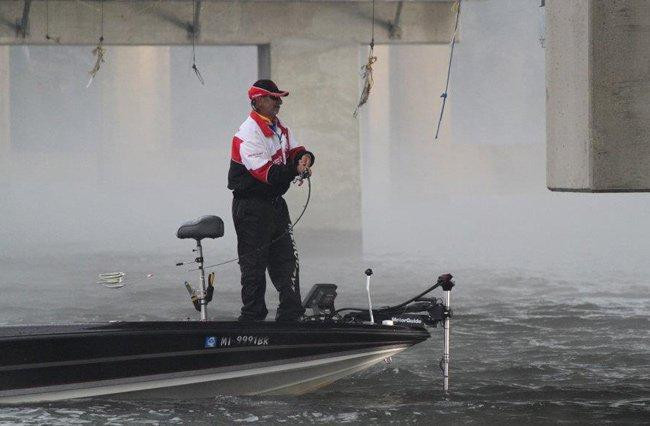 One of the most interesting aspects of the new found technique is the equipment necessary just to present the bait to the fish. Elias used an 8-foot flipping stick as did the majority of the anglers that fished the rig throughout the event. His rod of choice was a Pinnacle Perfecta 7-foot, 11-inch heavy-action flipping rod. The astonishing part though is the exaggerated bend of the rod in the back cast that is reminiscent of a glass cranking rod, almost parabolic, bending all the way to the reel seat.

He used 65-pound test Spiderwire Ultracast Fluorobraid. One of the reasons for such heavy line, the bait would hang multiple hooks on bottom and the line needed to be strong enough to straighten the hooks so as not to lose the entire rig. There was also the real risk of hooking multiple fish in the 5 to 8 pound class that would likely snap lesser line in an attempt to bring them in.

His reel of choice was a Pinnacle Optimus 6.4:1 gear ratio reel. The importance of a smooth reel was ever present with the possibility that a backlash could result in the line catching and the weight of the rig snatching the entire rod out of his hand. A large spool was also necessary since the diameter of the line only allowed a certain amount to fit on the reel.

Perhaps the most influential piece of equipment, with the exception of the Alabama Rig itself, was his Hydrowave.

“I really believe the Hydrowave helped me catch more fish,” Elias said. “I kept changing the sound on it all day on the final day. Several times on camera I said ‘I haven’t had a bite in 30 minutes. Let’s change the sound and see if we can get something going.’ And within 5 minutes I’d catch one.”

The Alabama Rig may very well change the entire sport of bass fishing modifying how we approach bass fishing year round. It is really too early to say. However one thing is certain, it has given us a new technique that is deadly for suspended fall bass that are feeding on shad.

So if you want to try this out in your neck of the woods, go to thealabamarig.com and check the bait out for yourself. Their site received more than 40,000 hits in four days last week, so needless to say they are a little backed up. If there is a waiting list to be on in the world of bass fishing right now, however, The Alabama Rig is the one.