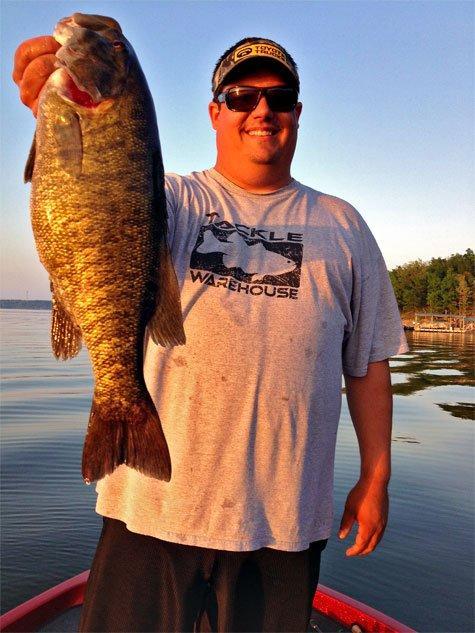 “They were biting Sunday.”

“You should have been here last week.”

We’ve all heard this statement. I can tell you from a media standpoint, I hear this nearly every time I go to fish with someone on a different lake or to shoot photos and videos with anglers on their home waters. The chase drives us but it’s those small windows of opportunity where we really bust the bass that lures us in as avid anglers.

The appeal in fishing might simply be summed up as the allure of fooling a fish of size and proportion as to merit esteem for outwitting such an experienced quarry. Catching unconditioned and unpressured, i.e. younger, smaller bass doesn’t require near the skill that it does to catch a bass of some size and age that has seen, fell for and been conditioned to various lures and techniques.

That said when you thrust yourself into fishing competition, it’s generally the guy that can catch the older, wiser bass that does well. So how does one acquire the knowledge to catch the older, wiser bass and not just the younger, impulsive bass? Well reading as much as you can from other successful anglers is a good start. Spending time on the water learning from the big catches obviously helps more than most practices. And more importantly learning from “not catching” them, or as I sometimes call them, fishing ghosts.

I spent a few afternoons last week preparing for the one tournament a year I really “prepare for” around home on Kentucky Lake â€“ the Jet-A-Marina Classic. This tournament sees some 300 boats every year, 600 anglers and a good portion of some of the best anglers on the lake, my southern friends generally excluded as most won’t venture up this way to fish.

I always look forward to this tournament and practicing because my good friend Brian Wilson, owner of Cumberland Pro Lures comes over and fishes a couple days with me to practice and then fishes the tournament with me. It’s usually the only days Brian and I get on the water together each year. So I always enjoy hanging out and talking fishing and life with a friend.

But there are Elite Series and FLW Tour pros, Everstart, Bassmaster Open, and BFL champions, guides and more fishing in this tournament. So if you can get on the same page as the fish on this one day, you can puff out your chest a little. Not a lot because after all, winning a bass fishing tournament doesn’t mean you’re the best angler on the lake. It simply means for that day, you figured the better five bass out that day. That being said, I would have liked to been a Hollowell brother this weekend.

Troy and Todd Hollowell wowed the crowd with a 23-pound limit and their biggest bass wasn’t even 6 pounds. That means every bass in their limit was a nice one. Now take much of the rest of the more than 300 boat field. There were 137 limits of bass between 10 and 15 pounds with several more above and below those marks. I talked with Terry Bolton after the tournament, and I think he summed up the fishing best.

The fishing by most standards was good but not great. Lots of 2-3 pound males cooperated with anglers, but the 4-pound or better bass were pretty hard to come by.

I had been catching some of those magical 4-pound-plus fish the last few weeks and therein lies the point where I started chasing ghosts.  Instead of locking down in what was our best area and upgrading to say 16-17 pounds, I took my early limit of 13 pounds and started chasing ghosts all over the lake. 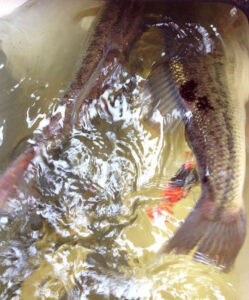 The result was a whopping 4-ounce upgrade. I kept cycling through areas where I had taken big bass weeks ago, chasing ghosts left behind by the bass that had moved to new areas. The bass have had a very odd year to deal with, but it’s probably odder to us than the bass. When it’s all said and done, they are still going to go through the same transitions they always do from prespawn to post spawn.

The bass are changing daily in some areas and not at all in other parts of the lake. The water is rising, the temperatures, however, have been declining and not a lot of folks have noticed that. I had noticed and found a few patterns by backing off the banks, focusing on transition areas and working baits more slowly and methodically to get bites.

However, I never got that clue in the right areas. I practiced in some of the areas I heard the top-five teams fished. That’s how it goes sometimes. Sometimes you get the bass and sometimes you don’t. But every time you don’t you should make an effort to understand what you missed and file into the memory banks.

What I missed was the bass in the best creek I found in the last week were there but they were moving slightly and behaving a lot differently because they are about to start bedding. I’ve enjoyed a little sight fishing the last week or two on Kentucky and Barkley Lakes, but I realized the only fish that were up spawning were the little guys. That’s because this lake has summer and winter pools. It creates a unique phenomenon that happen on a lot of lakes with winter draw downs that not many folks realize that I’m going to share. Because after all I’m not a tournament angler; I’m someone dedicated to helping others understand and improve their odds in fishing.

What happens a lot on lakes with summer and winter draw downs are the bass become not only conditioned to length of days and water temperatures but what parts of the bottom are in certain depths at certain times around the spawn.

What I’ve noticed as I’ve studied different bedding areas on the lake is that the best hard, gravel bottoms are in 1 to 2 feet of water if not on dry land all together. A big bass doesn’t want to be up that shallow on a fluctuating fishery. So they wait for those same areas to be covered with another 3-5 feet of water. The reason is the sections just behind these prime hard bottoms, further out into a bay or pocket are actually much softer bottoms and less conducive to spawning. So rather than sliding out deeper the fish are forced to wait as the water slides up the bank.

What I realized was happening late in my tournament day was the bass that had been staging in areas in deeper water in the bays had been progressively “sliding up” towards the bedding areas but stopping well short of them. In essence you sat in deeper water, threw to shallower water and worked your baits back a long ways to the boat to move through the transition zones that many of the bigger bass I suspect are held up in waiting on the water to rise.

Late in the day I returned to my starting area after striking out on literally 10 other stops. Within minutes I was catching keepers again and continued working from my primary areas toward the spawning flats. In between, in this mid-depth transition zone, I caught a 3-pounder. And I had one of those “I’m an idiot” moments.

Was I on 23 pounds to win the tournament? Absolutely not! I don’t think, anyhow. Probably not.

But I had committed a cardinal sin in bass fishing: “Never leave biting fish.”

I had a starting area that was so good, I nearly had my limit before the armada of boats was done launching in the distance. I could hear boats continually racing past me in the distance as I boated keeper 3 and keeper 4. I finally got to cull at 8 a.m. Culled and culled, each time having to use a balance beam as I had a few of those “go-with” fish in the well. For those that don’t know, a go-with fish is one that goes with three 5 pounders, nicely.

I finally got anxious and starting running all over the lake looking for 5-pounders that were long gone.  Where I could have just hunkered down and found those 3 and 4 pounders I was catching just days before while practicing in my primary area.

So I learned a painful, gut-punch lesson. A little more time in a good area would have yielded a good check, of that I’m sure. Instead I was haunted by big bass and memories of what was 3 weeks ago and not what was now. We didn’t fish in the moment and it cost me a check. We didn’t connect the dots and I finished in the bottom of the top third in the field. We didn’t have a top-20 finish like the last 2 years because I didn’t fish the conditions and the changes on tournament day like we had done so well the past two years.

But it’s good. It will help my fishing.

My dad whipped me a few good times as a kid. Good enough that I still remember them like it happened last night and not 35 years ago. Good enough that I feel like I’m getting whooped again when I’m scolding my own son for something. Those whoopings are part of who I am today. Sometimes we got to take a whooping to be the better person for it on the other side.

So my ghosts took me to the wood shed this weekend, so did a couple of Hollowell brothers. But that’s all right. Because my fishing will improve as a result.