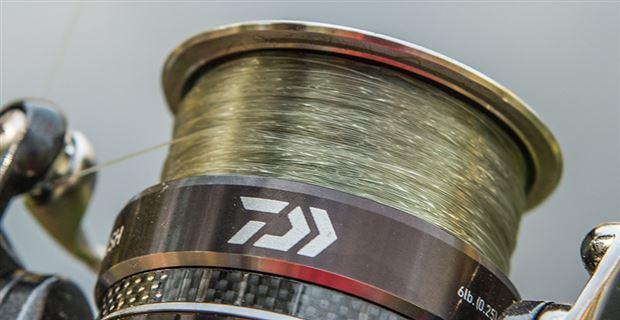 This decision hasn’t been an easy one. I’ve tried every possible line combination on my spinning reels over the last several years. After countless wind knots, cut-up hands and PG-13 words, I have finally come to a conclusion.

I’m using straight fluorocarbon on all of my spinning reels.

I honestly don’t know how long it will lastâ€”I hope for a whileâ€”but this has been a major sticking point for me lately. This is not necessarily gospel, so take it easy on the sassy Facebook comments. I’m sure some folks are already licking their chops to tell me how wrong I am. But I sincerely want your opinions on this. If you can offer some better ideas, I’ll definitely try them.

Before I get into my reasoning, I think it’s important to note a few things:

I’m fairly proficient at tying knots, or at least I like to think so. I’ve tried almost every braid-to-fluorocarbon knot I can think of and by far, the most durable one for me has been the Two-Uni Join Knot. It comes through the guides easily, it’s strong and it’s easy to tie.

But regardless of the knot, I cannot get over one simple fact when using braided main line with a fluorocarbon leader: I’m trusting two knots instead of one. That doubles my potential failure points. In my opinion, the leader knot is now the weakest link when I’m setting the hook or fighting a big bass.

Maybe it’s just a mental block for me.

I actually catch a fair number of big bass on spinning gear. My lakes get a lot of pressure and although I’m a pretty avid power fisherman, I’ve been doing a lot more damage on lighter tackle in the last year. My leader knot has only failed a few times, but who knows? The next failure might occur on a double-digit bass. I will cry if that happens.

I retie after every fish catch

As I mentioned in the beginning of this piece, I’m usually fishing spinning tackle around shallow cover when the bite is tough. It’s not my first choice. I’d much rather pitch a jig on 20-pound line and a meat stick. But I’m not out there doodling in 40-foot deep brush piles or anything. This is a backup deal for me.

When fishing with spinning tackle, I retie my main knot after every fish catch (except for little 12-inchers) because I’m usually scraping the first two or three feet of my line against dock posts, jetski lifts and other hard cover. 8-pound test doesn’t have a lot of wiggle room in regards to abrasion resistance, so I don’t risk it. If it feels jacked up, I strip off some line up to the undamaged section and retie my hook.

When using braided line with a fluorocarbon leader, I’m making that leader shorter each time i retie. Before I know it, I have a stubby leader that needs to be replaced. So I have to dig out my box of spare line and waste time tying on a new leader.

That just doesn’t seem like an efficient use of time to me. I despise wasting time on the water.

Line conditioner has been a big part of this

Since biting the bullet and making the switch to straight fluorocarbon, line conditioner has become a big part of my routine when finesse fishing. It takes a little planning and forethought, but I believe it’s one-hundred percent necessary. It makes thin-diameter fluorocarbon so much easier to manage on a spinning reel.

When I get a new spool of 8-pound fluorocarbon, the first thing I do is treat it with line conditioner. I’ve had great results with Reelsnot and Kevin VanDam’s Line and Lure Conditioner (I have zero affiliations with either company). I’ll spray it directly on the new spool and store it in my office until it’s time to put it on my reel.

After spooling my reel, I’ll treat the line again.

The night before fishing, I’ll treat it again before I go to bed.

The results are outstanding, to be honest. The line handles similarly to 6-pound monofilament and stays silky smooth and coil-free throughout the entire day of fishing. I have experienced one wind knot since making the switch approximately six months ago.

The financial side of things

There’s no doubt that using straight fluorocarbon will cost more money. You can leave braided line on a spinning reel and your great-grandkids could probably use the stuff. So that’s definitely something to consider.

No matter what fluorocarbon I’ve tested, it’s going to get coiled after sitting on your reel for a long time. Line conditioner will help, but it’s best to replace in severe cases.

I’ve also notice that the old clichÃ© holds true: You get what you pay for. I have lost count of the different small-diameter fluorocarbons I’ve tested on my spinning reels and it seems as if the most expensive brands handle the best.

Let’s have a discussion.