Not only do I tend to live everyday life by this popular aphorism, but I also try to keep it in the forefront of my mind whenever Iâ€™m bass fishing. I think a lot of us suffer from something I refer to as â€œparalysis by analysisâ€. In other words, we spend too much energy worrying about often mundane details instead of keeping our lines wet and simply fishing the moment.

When it comes to my fishing line selection, casting distance and accuracy, Iâ€™ve always been fairly pleased. I spend the extra money on high-end line and I consider myself pretty darn good at casting. Iâ€™ve never had any major issues, so why in the world would I change anything?

After hearing all of the hype about Kevin VanDamâ€™s Line & Lure Conditioner, I finally gave in and tried it. I felt it was important for me to have en educated opinion on such a popular product, so I had to test it out. And Iâ€™m being totally forthright when I say it is one of the most impressive fishing products Iâ€™ve used all year.

There are 4 reasons it has found a permanent home in my boat.

It drastically increased my casting distance

Since using Kevin VanDamâ€™s Line & Lure Conditioner, I have noticed a sizeable increase in my casting distance with both casting and spinning gear. Iâ€™ve tried it on fluorocarbon, monofilament and braided lines and on average, Iâ€™d estimate that Iâ€™m getting more than 20 yards of additional distance on each cast.

I can feel a noticeable difference, even on brand new fishing line. It becomes much softer and easier to manage, which of course almost eliminates line management issues. The line comes off the reel smoothly and at the risk of sounding silly, it almost feels silky.

This has been a big advantage in all situations, but most notably in windy conditions and when Iâ€™m skipping baits underneath docks. I know a lot of folks who hide from the wind due to excessive backlash problems and I hate it for â€˜emâ€” theyâ€™re missing out on a lot of good fishing. But after applying this stuff to my line, Iâ€™m able to cast lightweight balsa baits directly into the wind with almost zero backlashes. And when I do get a backlash, itâ€™s much easier to remove because the line doesnâ€™t kink as it normally would.

In regards to skipping docks, Iâ€™ve been very impressed by the difference this conditioner has made. This technique is tough to learn on casting gear because your bait slows down as it skips across the water while your spool continues to turn quickly. Thatâ€™s why itâ€™s easy to backlash in these situations. The Kevin VanDamâ€™s Line & Lure Conditioner allows your line to stay tightly packed on the spool and nearly eliminates coiling, which has made my skipping endeavors much easier.
It keeps line strong and its easy to apply 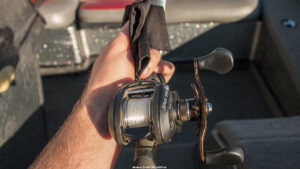 I was actually very apprehensive about putting this conditioner on my line. I have a bunch of reels and if it ruined the line on each, it would be a hugely expensive mistake. So I can totally understand if youâ€™re having similar thoughts. Join the club.

Iâ€™ve found, however, that it doesnâ€™t hurt your lineâ€™s strength whatsoever. Iâ€™ve used stuff in the past that made my line feel very brittle after a few applications, so to be honest, I swore off all line conditioners for a few years. But Iâ€™ve put this product on my heaviest flipping line and I can still manhandle bass without any issues. My knot strength has been unaffected too. Who knowsâ€” it might actually be stronger due to the increased smoothness of the line. But I donâ€™t have any concrete evidence to support that.

I also really like how easy it is to use. There are three different ways you can apply it depending upon your preference or situation.

The stuff Iâ€™ve used in the past smelled like WD-40 and felt like it, too. It was ridiculously greasy and actually gunked up a few of my reels. Not to mention, it didnâ€™t last but for a few hours of fishing before it started coming off on the waterâ€™s surface.

But this product contains a non-toxic blend of polymers, not oil. As a result, itâ€™s not greasy in the least bit. Even when you spray it on your fingers and rub them together, you wonâ€™t notice an oily feel. It dries on your skin within seconds with no residue.

This is a big deal in my opinion. I donâ€™t want greasy hands when Iâ€™m trying to set the hook on a 1/2-ounce jig underneath a dock. It feels silky on your line, but your fingers remain totally dry and uninhibited. 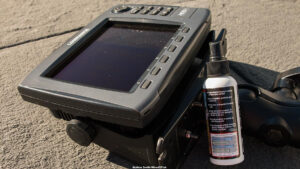 Iâ€™ll preface this by admitting that I didnâ€™t just go around spraying random stuff with this productâ€” the thought never crossed my mind. I heard from some friends that it had multiple uses so I had to give it a shot.

Much to my surprise, Kevin VanDamâ€™s Line & Lure Conditioner is an excellent cleaner for your electronics screens. It removes water spots and grime quickly and easily when you apply it with a microfiber cloth. I even noticed water beading up on my screens after I applied it, which has resulted in fewer water spots and less glare.

I also use this product to polish my old spinnerbait blades. I have a bunch of old spinnerbaits in stuffed in an old tackle tray, so I sprayed â€˜em down with this conditioner and polished them with that old hunting shirt I mentioned. They actually turned out really well which was pretty darn cool.

If youâ€™re looking for a way to add some distance to your casts, Iâ€™d absolutely recommend Kevin VanDamâ€™s Line & Lure Conditioner. It has truly made a big difference for me and it now has a permanent home in my boatâ€™s glove box.

If you want to learn more about the scientific side of things, LineAndLure.com has some really cool information on their website.