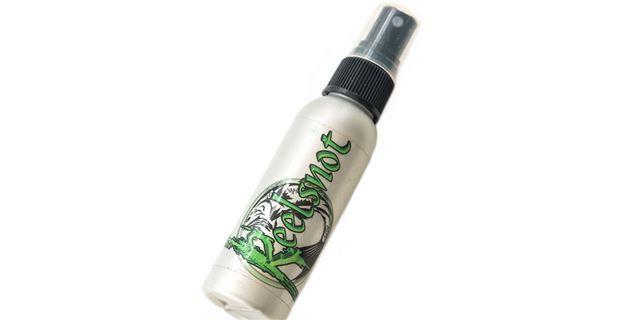 I’m going to make a quick admission—a mea culpa, of sorts—before I even get this review cranked up: I can be a lazy bass fisherman. I’m not necessarily referring to my on-the-water behavior, but my off-the-water preparation flat-out stinks sometimes. I only re-spool my reels out of necessity, not for pleasure, and I’ve never gotten a kick out of rigging tackle. I love the act of fishing—all of this rigging business is just a necessary evil in my opinion.

Due to my aversion of constantly stripping and spooling my large collection of reels, I’ve been experimenting with line conditioners quite a bit for the past two years. If I can use a product that’ll help me get a little more use from a particular batch of line, I’m going to try it.

I’ve heard of talk recently about Reelsnot. Some hardcore fishing buddies of mine have been using it for quite some time and they’ve been on me to try it for months. I trust these guys a lot, so I got a small, 2-ounce bottle of it and put it through its paces. Couldn’t hurt, right?

After a lot of testing, here’s what I think you should know about it.

I purposely tested Reelsnot on some of the older fluorocarbon line on my crankbait combos. This particular line has been on my reels for far too long—several months at the very least—and it more closely resembled a slinky than fluorocarbon. I figured I’d put it to the ultimate test right out of the gate. 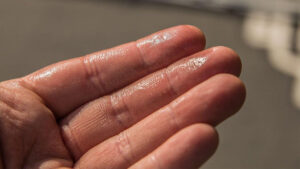 After spraying two quick sprays on the spool and letting it sit for roughly 5 minutes, I picked up the rod and reel and started winging a 1/2-ounce crankbait around. Simply put, it increased my casting distance quite impressively. With a medium-action rod and old, 12-pound fluorocarbon, I could feel my backing knot with my thumb at the end of each cast. I’m not excellent at judging distance, but if I had to guess, I was casting 15 to 20 yards farther than before.

The line seemed to slide across my thumb much easier and this proved especially advantageous when casting into the wind. I fished a lot of wind-blown points throughout my testing and I didn’t have any issues whatsoever with wind knots, loops or backlashes. I’m still using it today and I could count the number of backlashes I’ve experienced on one hand. 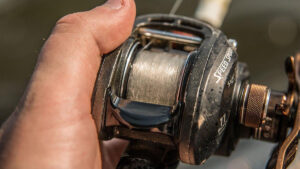 With that being said, it’s important to limit your overspray whenever possible. Reelsnot is ridiculously slick and if you’re not careful during application, it’ll also make your reel grips and thumb bar slippery as well. If you do happen to get some overspray on the exterior of your reel, the slickness goes away easily if you put a little water on it.

I would also advise you to apply Reelsnot away from your boat carpet—apply it in the garage or over the water instead. A little overspray won’t hurt anything, but I sprayed a few reels as they were lying on my front deck and it temporarily discolored (darkened) my carpet. I was initially a little concerned, but I poured a little water on it and it returned to normal within a few minutes.

Reelsnot also proved effective in terms of memory reduction. I use a lot of straight fluorocarbon setups on my spinning reels when I’m guiding—to avoid constantly tying line-to-line knots—and line memory is a constant battle I have to fight. There’s nothing worse than attempting to make a long cast with a weightless lure and having your line blow up beyond repair.

So of course, I felt it was necessary to test Reelsnot on said spinning reels and the results were great. The line came off of the spool much easier than before and again, my casting distance improved dramatically. I also didn’t notice that “line whip” sound throughout the cast. 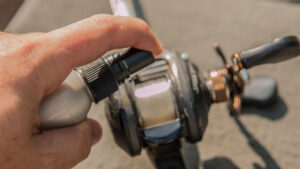 I also have a few older casting reels that are becoming a bit noisy. They’ve caught hundreds of pounds of bass for me over the years and still work perfectly, but they are definitely a little strange-sounding when I make a hard cast. I applied a spray or two of Reelsnot to these reels and they did, in fact, become quieter. All I did was spray the spool—I didn’t spray them internally—and now they’re a bit smoother and I’ll continue using them until they fall apart.

Bang for your buck 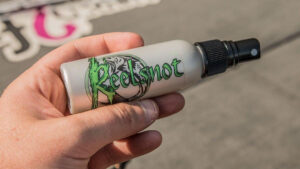 As you can see in the photos, Reelsnot comes in a very small, 2-ounce bottle. I was initially a bit concerned about it because, let’s be honest—2 ounces isn’t a lot of product. I didn’t want to have to buy a new bottle between every other tournament.

I’m happy to say, however, that a little of this stuff goes a long, long way. There’s no need to go crazy and spray 5 or 10 sprays on each one of your reels. I spray each reel twice, at most, and it lasts for a considerable amount of time. 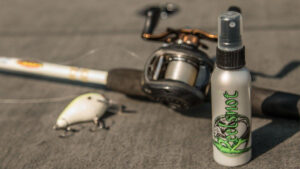 Reelsnot is a perfect name for this product because it’s slicker than a wet pig. It does a great job at increasing casting distance and reducing memory, so it’s certainly effective. Once I learned how to properly apply it—remember, control your overspray—I really enjoyed using it. With the rising costs of many fishing lines, I think it’s worth $10 to give it a shot.

Reelsnot is available at reelsnot.com and Wired2Fish readers can receive free shipping using the code: V69KC566DUWH