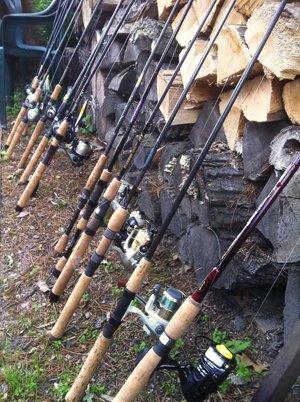 Earlier this week we detailed how one pro has mastered milking an area for all its worth over several days of fishing. It was Vic Vatalaro and it was a great lesson on finding replenishing areas and then stalking the bass and fishing patiently and methodically as they roamed in and out of the area at various times of the day.

So there is the other end of the spectrum that is basically eliminating as much unproductive water as you can and then run what’s left, which should be the productive water. There’s a theory in fishing that if you fish enough water, eventually you’ll find the fish. And it’s always interesting how often we beat up what we find practicing and there is nothing left for when we really need it. How often have you heard a pro say, “I just went fishing today and got lucky.” Was it really lucky?

Steve Kennedy has completely revamped his fishing and he’s fishing in what he calls the moment. He’s not trying to plan too much in practice and he’s trying not to fish too much productive water if he can help it so that he’s got it saved for the tournament. It’s really a smart philosophy if you stop and think about it. So often we as anglers educate the fish on our offerings and on how we are presenting the same type of baits over and over. Then come tournament time or the next time we get to go fishing for fun, we’re perplexed by why we can’t catch the bass effectively.

I’ve won two tournaments without having caught a bass in practice. Sounds crazy I know. I talked about one jackpot I won last year in this article about Why We Fish. In fact, the first jackpot tourney I ever fished on Kentucky Lake, I won. It was only my second time on the lake. But I looked at the season. I looked at the lake, and I just picked an area I thought the fish would be moving into getting ready for their impending spawn.

With my scouting, I eliminated all but one area of the lake. It was a gamble yes, but it worked because, as luck would have it, the lake fished a lot like Lake Dardanelle in the early spring which is where I learned to bass fish. Eliminating what I figured wouldn’t be working at the time turned out to be a good game plan. I basically fished two rods all afternoon and evening and we caught all our fish on three baits.

At Wired2Fish, we’re fortunate to not only have access to the pros to learn from and help us teach other anglers how to get better at this activity that we all love so much, but we also get to bounce ideas off each other, especially when we have tournaments coming up. Each of us are not only media types, but we’re accomplished anglers in our own respects.

Terry Brown is an accomplished angler having won numerous tournaments including the old Red Mans on Kentucky Lake, Wrangler Nationals after being top angler in IL, all while fishing against the likes of Shaw Grigsby, Peter T and other Elite Series caliber anglers. I’ve won some jackpots here and there and done well in larger local tournaments. Scott is one of the most accomplished pro Walleye anglers the sport has ever had. And Todd is adept at taking what we learn from each other and applying it to his tournament situations as proven this week in his recent tournament outing.

Last week, he and I were kicking back and forth ideas on where the fish on the lake he was trying to pattern for an upcoming tournament might be and where they were headed. He also had some good local sticks giving him an idea of what might be going on and he spent some time on the water basically just eliminating where the fish obviously were not.

It can be very discouraging to go through preparation for fishing and not having any idea where the fish are yet. But the lake gets a lot smaller as you eliminate all the places where they aren’t. Todd was able to eliminate a bunch of water in the limited time he had to fish and prepare for the tournament. He decided to just fish as much water as possible in the tournament because eventually you’re going to get around the fish. If you make enough casts, you’re going to find some.

Low and behold he took the divide and conquer approach into the tournament and began to stumble on to some small buck largemouths that were roaming the shallows thinking about the future spawn. He picked them off easily with a few different baits but he wasn’t getting the quality, so he kept refining and moving and covering water fast while focusing on casting as much as possible. While fishing up on a large flat that had a small neck down area in very shallow water, it happened. A big fish cratered his spinnerbait.

He fought the fish, and it made a huge jump. Big smallie! It’s very hard to explain to people the adrenaline rush you get from seeing a big fish on the line in a tournament situation. It’s just something you have to experience. He was able to get the fish in the net, a smallmouth weighing more than 5 pounds. 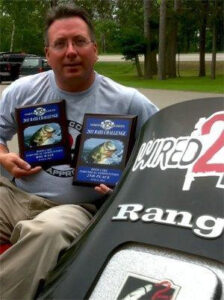 Now he had a good shot at big bass for the tournament and it was just a matter of upgrading some of his buck largemouths. On the very next cast, a 3-pound smallmouth crushed his bait. Now with two good fish in the well and a limit, his confidence was restored and his practice agony erased.

He ended up second with big fish for the tourney. Not a bad day’s work when he was on nothing in practice. But sometimes being on nothing in practice means you’re going to be on something when it counts. This approach can apply to anglers who have a limited amount of time to fish their local lakes or maybe you vacation on a favorite lake and need to pinpoint the fish quickly to maximize your fun on the water in a short window of time. It’s not just a tournament tactic but a good practice for just fun fishing too.

So much of the time we get caught up in the small details like what color and what weight and what presentation, that sometimes we forget one of the most basic principles in fishing, which is to just keep moving if you’re not getting bit. Whether you’re trying to find fish with limited amounts of time on the water, or you’re vacationing on an unfamiliar lake or planning for your next tournament. Don’t forget that not catching sometimes opens you up to just go fishing.

Keep changing and keep moving until you get that first bite and then try to hone in on what’s unique about the spot, the area, the mood of the fish, the cover and your presentation. But until then, keep your head down, your trolling motor moving and your arm in that constant cast and wind routine.