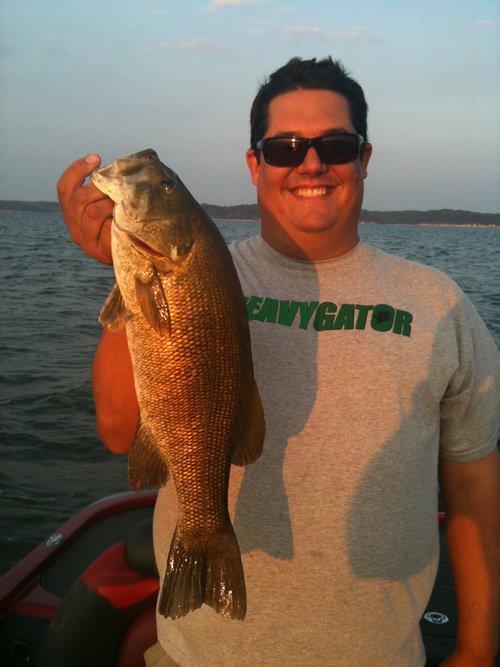 On Tuesday, a friend asked if I wanted to fish the local jackpot tourney that night on Kentucky Lake. I like to fish, but for some reason I really like fishing those tournaments. I’ve won a couple, had big bass in a few, but for the most part, I’m a middle-of-the-pack guy because I’m still learning Kentucky Lake. Most of these guys have decades of experience on me.

Tuesday nighters on Kentucky Lake mean serious business. The events are 6-10 p.m., and no one can weigh a dead bass. Every bass has to be 15-inches or longer, including spots, even though the lake limit is only 12-inches.

Then there is the small matter of the competition. Guides, pro anglers like Terry Bolton and Dan Morehead fish on occasion, tournament directors, and life-long “sticks” as we call them that can flat-out catch the bass on this lake all fish the Tuesday nighter.

There is no huge payout for first. If it’s a good night, you and your partner might split $300 for 4 hours of work, if you’re lucky enough to win.

But that’s not what drives us to fish. It’s everything else surrounding the actual tournament itself. Before the blast off, we sit at Moor’s at the picnic tables and share stories of old boats, crazy fish catches and of course all the ones that have gotten away.

At takeoff, it’s not really a race, but rather a friendly speed test among buddies racing side by side down the lake. We have these slick boats, and it’s fun to race around with a sense of urgency at times.

Then there is the sunset that comes with every 6-10 tournament. For some reason, there is that hour where the light is mystic and your blood pressure and heart rate go back to normal. I always smile when folks scoff at me for fishing, because they obviously don’t know what I know.

There is the camaraderie with your team partner. Sharing a great catch, wrestling a big bass together â€” a rod and reel in my hand and a landing net in his.

But most importantly there is the fishing.

Last night, I had one of my most memorable tournament experiences with my partner Mark Dorn, Operations Manager at FLW Outdoors. To say we caught them, really didn’t do it justice.

A few minutes later, I asked Mark for the net on a hard pulling fish. The fish jumped, and it was a 3 1/2-pound smallmouth. We weren’t even an hour into the tournament, and we had four bass that weighed almost 19 pounds.

To say we were smiling was an understatement. High fives, pats on the back, fist pumps and even chill bumps were constant for about 20 minutes.

This is a moment in time where you have to realize and appreciate that catching fish like this is rare, but to do it in a tournament, adds another dimension to the emotional range. At this point in the evening, we felt like we could run a Boston Marathon because we had some great fishing, and it was barely 7 p.m.

We fished for two hours without another bass. The emotions were starting to turn. The pressure mounted, because on Kentucky Lake, even in a 4-hour tournament, 18 pounds and change usually won’t get it done.

You feel like you’ve had one of your best trips, and it might all be for naught. But we fought back those negative thoughts individually and collectively, by reminding each other we were going to get one more good bite.

Instead we got two. Mark hit another 5-pound largemouth and moments later a 3-pound smallmouth. With six good keeper bass boated, and most of our ice depleted, we decide to go back to the dock early by almost 35 minutes and just manage our fish until everyone else arrived.

After it’s all said and done. There was a 20-pound limit, one weighing more than 21 pounds and ours that weighed 23.86 pounds including the 6.3-pound kicker for big bass.

Because we fish with such a good group of guys, a whole new range of emotions builds up when Terry Bolton and Dan Morehead tell you good job, Charlie Evans comes over and pats you on the back and past winners come congratulate you.

It’s like you’re again part of this fraternity of good folks, that love the same things you love, and appreciate with you how special the fishing was.

Sure there is some money for winning. But the elation we felt the whole next day had NOTHING to do with money in our wallet, but rather the pride of finding our new spot, sticking with our game plan and having it all come together in one 4-hour span.

I love to catch bass. But sometimes doing it in a tournament a little better then the guys you have a mutual admiration for, makes it that much more special.

And … that’s why we tournament fish.