Misconceptions tend to run wild when it comes to the sport of professional bass fishing. Rumors run rampant, misinformation is spread and fans often only see the glorious side of the sport. The truth is, lots of these guys are fishing for their lives. Massive credit card debt, strained family relationships and unexpected sponsorship changes are prevalent in this sport but nobody really talks about it.

Until now, that is.

Professional angler Brandon Palaniuk is one of the most popular bass fishermen in the country. Through years of hard work and sacrifice, he has built a career for himself that most can only dream of having. In addition to catching big bass, he’s also known for being brutally honest when it comes to the sport of professional fishing.

We recently had a long talk about the state of the sport and plunged into some topics that most top professionals don’t like to talk about. These “confessions” will give you a better understanding of what really goes on behind the scenes.

You don’t have to be rich

Thanks to social media, anyone can be condescending these days. Within five minutes of scrolling through your news feed, you can probably find comments accusing professional anglers of being born with a silver spoon in their mouth, using “daddy’s money” to jump-start their careers and things of that nature.

Has that helped some professional anglers get a leg up? Sure, it has. But the large majority of these guys made it the hard way.

“If you’re talented enough and want it bad enough, anyone can make it in this sport,” Palaniuk said. “You don’t need to have a bunch of money to make it. Now, you do need some talent. Some guys have it and some don’t. There has to be some self awareness there. But I just looked at my 2009 pay stubs, and I made $26,000 working two jobs. That was the year before I qualified for the Elite Series. I barely made enough money to live. I don’t buy the ‘silver spoon’ argument one bit. It is a long, hard grind for the large majority of us.”

It takes a certain level of selfishness

With the emergence and growing popularity of high school and college fishing, it’s now becoming “cool” to be on a fishing team. How awesome is that for our sport? But Palaniuk just wants to make sure these young anglers have realistic expectations if they want to fish for a living.

“I am thrilled that so many young people are getting involved in the sport,” Palaniuk said. “I want them to understand, however, that you have to be somewhat selfish if you want to take it to the professional level. That doesn’t mean being cocky. It means telling your friends that you’re not going out on Friday and Saturday nights. It means telling your girlfriend that you’re leaving for three weeks. It means missing family functions.

“You won’t have a fancy truck or boat. And that’s okay. I saved up to buy a $35,000 bass boat and I towed it with a $1,500 truck. You have to go all-in. There’s no grey area. You really have to shut yourself off from the outside world and your social life in order to dig in and focus on your goal. Not everyone can do that.”

It’s easy to watch profesional fishing and think that the anglers have it made. They have the fancy boats, slick-looking jerseys and some even have lifted trucks worth more than some small houses. According to Palaniuk, however, there is a huge gap between the big guys and the little guys.

“I was guilty of this when I started fishing professionally,” Palaniuk said. “You assume that everyone is instantly making a bunch of money and every jersey logo is worth $10,000. That is simply not reality. There is such an enormous gap between the guy who is making the most and the guy who is making the least. You have guys out here whose sponsorship money doesn’t even cover their expenses and then some guys who make seven figures-and they’re fishing together on the same tour.”

It’s important to note, however, that even the big-name anglers earned every penny of their lucrative sponsorship deals.

“My first year on tour, the only money I had was the little bit I got from B.A.S.S. Nation,” Palaniuk said. “I sold the boat I won in the Federation National Championship so I could have some money, got a Skeeter on a delayed bill and that’s how I paid for my entry fees. I didn’t have a single paying sponsor. I think I got like $10,000 from the Federation because I was the first guy to go from the Federation to the Elites. The only other people who paid me was Berkley, and it wasn’t even in the contract. After the Classic, they sent me a letter saying they knew I was sleeping in the back of my truck and they gave me $5,000. That was a huge help for me and I’ll always appreciate it.”

This is a common story for a lot of professional anglers as they rise through the ranks. Oh, and this is just for entry fees. Now you need to have enough money for travel, food and gas money.

You get beat. A lot.

We see a lot of photos with anglers hoisting big trophies over their heads, but what we don’t see is the stress and pressure that comes along with it. Palaniuk says it eats a lot of guys alive.

“Perhaps the most unique thing about this sport is that you’re going to get beat a lot more than you’ll win,” Palaniuk said. “It doesn’t matter who you are or how good you are. You have to be willing and able to withstand those blows. It’s so much more of a mental thing than you’d think. A lot of these guys are fishing defensively, meaning they’re just trying to cut a check and pay some bills. I’d say that a healthy portion of professional anglers are scared to death about money while they’re fishing. There’s no doubt in my mind.

“Everyone is in a different position, but man, when a guy has two kids, a wife, health insurance and a mortgage to worry about, that stuff comes into play-big time. You don’t want to drag your family down a financial hole. Some guys perform best under that pressure, but some will fish scared, play defense and completely buckle. We see it all the time. This addiction we have to tournament fishing has ruined a lot of marriages and left a lot of families broken. It’s no joke.”

There’s no room for negative people 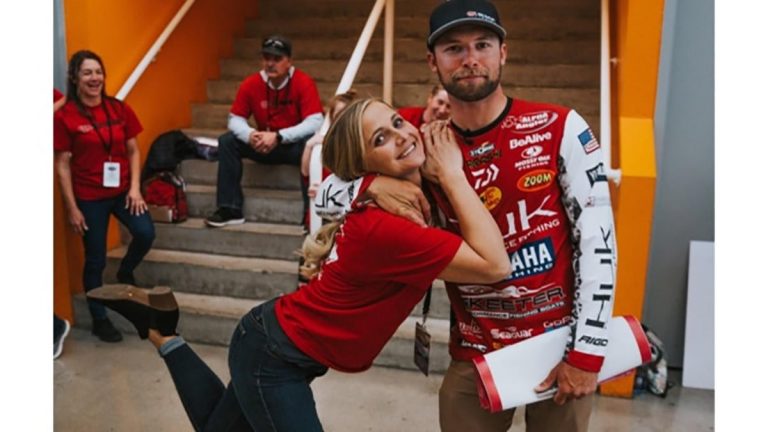 Because losses are such a common theme in this sport, your mental toughness and positivity becomes paramount to your success. If someone is bringing you down, sometimes you have to cut ’em out.

“I think you have to reject negativity at all costs,” Palaniuk said. “You need to surround yourself with positive people, no matter what. I’m talking sponsorships, family, girlfriend, wife—everyone. Who you hang out with makes a huge difference.

“When I roomed with Chad Pipkens on the Elite Series, I was more positive than I had ever been. I would make a top 20 and be pissed off about it, but Chad might finish lower than me but be pumped up and optimistic. That type of stuff is infectious. It’s so important to spend your time around positive people. You need that support system on the road and at home. You absolutely cannot be worried about what’s going on at home. It takes a very special significant other to understand this lifestyle.”