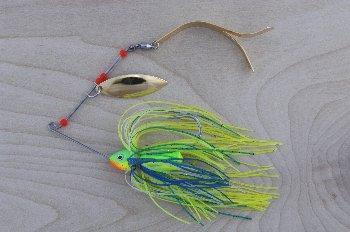 Lunker Lure made a big splash in fishing in the 80’s with the Triple Rattleback jig. No other jig combined the great big bass  reputation of the jig and 3 very loud rattle chambers at that time. Of course Lunker Lure is most noted for creating the Original Lunker Lure Buzz Bait that is  still a top producer for anglers across the country  The creations that Don and Brent Gentry built  are legendary. Lunker Lure merged with Hawg Caller, another successful regional company, and they are still in business today.
Lunker Lure had a who’s who in pro staffs in the early days with Denny Brauer, Tommy Biffle and Gary Klein.  Those in the know know that those three revolutionized flipping and pitiching as we know it today and Lunker Lure was right in the middle of that. They created jigs for casting, flipping and pitching and the hard work during the design phase made them the best in the industry for fishing heavy cover.
Don Gentry is a tinkerer and his love of fishing and what makes them go goes into every product. Taking  a good lure and making it better or coming up with an entirely new design has been part of the reputation of Lunker Lure since they opened the doors.
The Rattle Back Spinnerbait is another Don Gentry design. He created a patented unique blade style (Vibratron) that combined the flash of a willow leaf blade with the vibration properties  of a Colorado blade. This blade puts out more vibration than a peg legged washing machine in spin cycle and on tough days it gets bites. To the best of our knowledge there were 3 different sizes of that blade made. A small one for a single spin Tiny Tron, an intermediate for the  lighter weights and a larger one for the heavier models.
Gary Klein told us “Its the best spinnerbait ever made. Great flash, great vibrations and a true runner right out of the package. It has made me a lot of money along the way.”
The Rattle Back Spinnerbait has a rattle chamber built into the bullet style  head of the bait that allows it to not only put off a ton of vibration but attract bass from long distances  because of  the rattle as well. Combined with either a number 4 willow or a Colorado blade this bait works well around and over grass and can even be buzzed with a gurgling and sputtering not seen on other baits without the patented blade. We have found it particularly effective paralleling rip rap and on blow down trees.
The Lunker Lure Rattle Back Spinnerbait comes in 3 sizes including 1/4, 3/8 and 3/4. It has a big brother bait with the Triple Rattleback version that is even louder.  Lunker Lure does have the Triple Rattle Back version for sale on their website at $4.49 each and are sold in Sunfish color only. The regular Rattle Back Spinner bait is very hard to find, as are most of the “Under the Radar” products and if you have them keep them under lock and key.
To learn more about Lunker Lure or to buy  click here.
Next