Stanley Garbacz Jr. of Caseville, Mich. and Bruce Warren of Pigeon, Mich. were charged with illegal possession of panfish, perch and walleye in March 2021. The duo had been out fishing one of the days in March, when someone alerted Conservation Officer Josh Wright through the DNR’s Report All Poaching Hotline that Garbacz was at his residence with hundreds of perch, putting him well over the daily limit of 25 and possession limit of 75.

Wright called the Huron County Sheriff’s Office and Deputy Joshua Loss agreed to help with the bust. When Loss arrived at the residence, he found Garbancz and Warren filleting a bunch of perch. When Wright arrived, he counted 170 perch that the duo were cleaning which put each of them with 60 perch more than the daily limit.

As the investigation continued, Wright found 85 bags of frozen fish in a freezer which contained 59 walleye, 320 panfish, and 468 perch which put Garbacz over the possession limit by 35 walleye, 245 panfish and 393 perch. Possession limits for walleye are 24, while perch and and panfish both have 75 total possession limit.

Garbacz received two charges, one for the perch and one for the walleye with a restitution payment of $7,930, while Warren was arraigned with one charge of taking over the daily limit of perch with a fee of $600.

They had initial court dates in June, although no updates have been made about the charges. 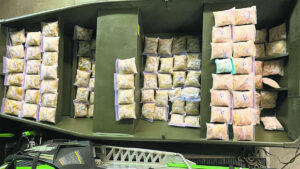