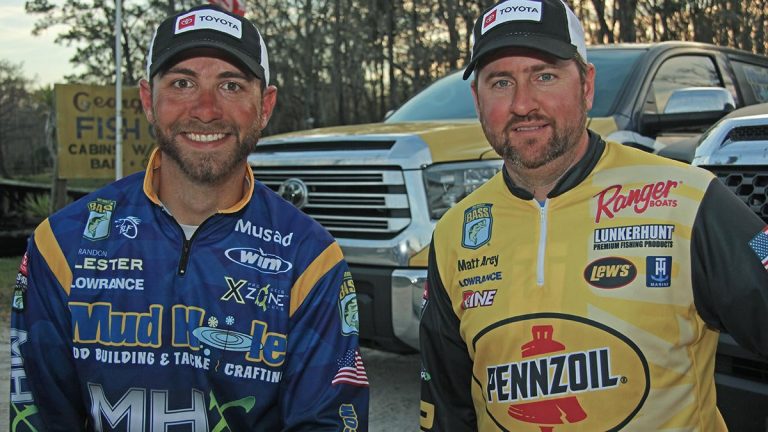 Arey, who passed his driver’s test 22 years ago in a Toyota truck, has won nearly $1 Million in his pro angling career, and qualified for 10 Forrest Wood Cup Championships before joining the Bassmaster Elite Series this season.

“I passed my driver’s test in a 1993 four-wheel drive, extended cab, Toyota pick-up truck with BFG All Terrain tires on it. If you can’t tell that truck still means the world to me 22 years later,” smiles Arey, who holds a degree in Business Agriculture from North Carolina State.

“These days, I’m driving my fifth full-size Toyota Tundra,” says Arey. “It’s all about reliability. I’ve never had a mechanical issue with any of the five Tundras I’ve bought, and the Bonus Bucks program is a no-brainer if you’re a tournament fisherman.”

Brandon Lester is truly one of bass fishing’s brightest young stars, and he too has been a loyal Tundra owner during his short but illustrious career that includes (23) Top 20s and 3 Bassmaster Classics.

“I bought my first Tundra because I wanted to be eligible for Bonus Bucks, but it’s just a top-quality vehicle, and the huge 38-gallon fuel tank they have today is just awesome for those of us that tow a bass boat long distances,” says Lester.

“Honestly, I’m both honored and humbled to be a part of Team Toyota because there’s no other company in the world that has done more to support bass fishing during the six years I’ve been a pro than Toyota,” says Lester.