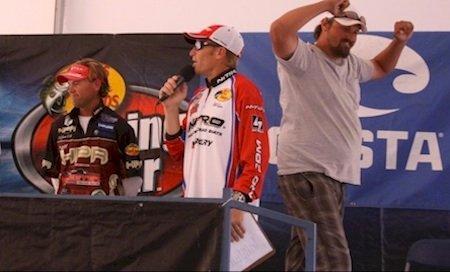 Las Vegas, Nev. – September 13, 2012 – The theme for the 2012 WON Bass Nitro Boats / Mercury U.S. Open has been the proverbial adage, “change is constant.” Once again, the conditions at Lake Mead made an about face and it made for interesting decision making for the 256 anglers in the field.

But, when you are running the most prestigious single tournament in the Western United States; one that has a reputation for being the toughest tournament in bass fishing, a little adversity adds to the story.

Following a day with dense clouds and desert monsoon conditions, Lake Mead became a gentle lady and provided the field with high, bluebird skies and glassy surface waters. While those conditions are perfect for a boating day with the family, they are certainly no gift for the bass angler.

High skies and light winds the day after a front mean tough fishing. But, these are among the best anglers in the world, and they have the ability adjust to the conditions with efficiency and deal with adversity in confidence.

While a large portion of the field showed their dexterity, in the end it was Sean Stafford who made the best decisions and emerged as the 2012 WON Bass Nitro Boats / Mercury Outboards U.S. Open Champion.

In an unlikely turn of events, Stafford posted 13.16 pounds of bass; including the largest bass of the day. His three day total weight of 34.60 was enough to leapfrog the eight anglers in front of him to claim the title of 2012 WON Bass U.S. Open Champion. To make matters more interesting, Stafford weighed in during the second flight, and sat in the Costa Sunglasses hot seat until the final angler weighed in.

“I’m a little speechless right now,” said Stafford of his win immediately after weigh-in concluded. “”This is my ninth U.S. Open, and it’s my favorite tournament to fish in; I still can’t believe I won.”

Stafford said that he used a two pronged approach to the U.S. Open, depending upon the conditions the day presented him. On days one and two, he focused primarily on using a variety of topwater baits, but turned to a Canyon Plastics tube when the conditions slicked off. “I really targeted isolated grass clumps with either approach,” Stafford reported. “The topwater baits were used around the clumps, and the tube helped me fish tighter when the sun was high.” Stafford earned over $40,000 in cash, and a Nitro Z8 / Mercury Outboard prize package bringing his total winnings to more than $80,000

“I’m really disappointed that I fell short today,” said Pirch. “That’s not to take anything away from Sean (Stafford); he fished really well, congratulations to him. “I got the bite I needed at 3:05 today and wasn’t able to land it. It was the biggest fish I’ve ever seen at Lake Mead, and I lost it.”

Pirch reported using multiple approaches to produce his fish throughout the event. He said that spinnerbaits, buzzbaits and deep crankbaits produced for him in the wind, but he turned to Roboworms on a dropshot rig today when the conditions slicked off.

Dick Watson, who began the day in third place, maintained his position by tossing Revenge spinnerbaits and jigs to bring his total weight to 32.64 pounds. Jamie Shaw wound up fourth with 32.54 pounds and Chris Bozarth rounded out the top five with 31.66 pounds.

The AA division proved to be a landslide by Lake Mead standards. Ken Whalen of Lompoc, Calif. placed 34.45 pounds on the U.S. Open scales to claim the title of 2012 WON Bass U.S. Open AAA Champion. Whalen also managed to bring a 4.94-pound largemouth to the scales on day one, which proved to be the largest bass of the tournament.