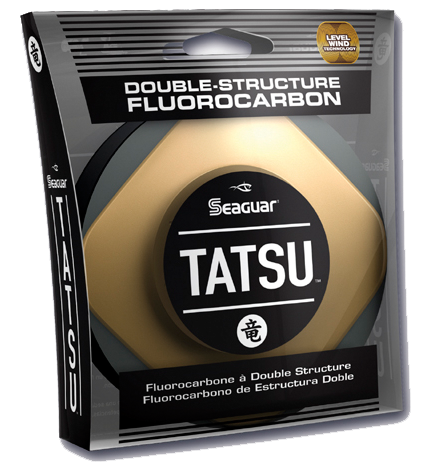 Revolutionary, ground breaking, unbelievable, cutting edge. We have heard it before and most times it is so-so, mediocre, not worth the money, or its just ok but seldom are we taken back by a product’s billing. That was  the case until we got to test Seaguar’s new line called TATSU.
Seaguar TATSU is cutting  edge. Designed with two high grade resins blended into a single line TATSU is soft and supple yet tough as iron on hook sets and around things that can cause abrasions and  knicks.
Our first experience with TATSU was the spooling process and we could tell right away it was very different. It spooled on a  Quantum KVD Tour Edition reel like 10-pound mono. It was very smooth with zero coiling, and it laid on the reel like it was  meant to be there. Some fluoro’s can be unwieldly, but TATSU  laid on the reel like a baby’s blanket. Because of the cost of TATSU and our application was flipping and pitching  we backed the reel with some good 15-pound  mono. We tied a blood knot to join the mono  to the fluoro and  checked the knot before we proceeded to fill the spool.
One of the tricks to winding fluoro is keeping a constant pressure and making sure it is equally distributed on the reel spool. A high school teacher once told us garbage in,  garbage out, so it is crucial that we took the right steps to  get the best performance.
We matched the  KVD Tour and TATSU with a Kistler 7  1/2 foot LTA rod, a Tru-Tungsten 1/4 ounce tungsten weight and a  Reaction Innovations BMF hook and a  California 420 Sweet Beaver for the tests. It is critical to set the reel up for the bait weight and every time we changed baits, to a  Gene Larew Mega-Ring Tube or a  Big Bite Bait Kriet Creature we adjusted accordingly. That is a step that most pros consider but weekenders sometimes miss.
Our Tests
Without question we loved this line. From the first pitch to the last pitch at the end of the day this line performed as designed. No memory or   backlashes, and even though we were using 15 pound TATSU, it seemed like we were using 12 pound mono. It lays nice, pitches well and is tough too. We fished hedge, water willow and blow downs all day only retying out of habit.
We used clear TATSU, so line watchers may have an issue because it is virtually invisible. Due to its performance benchmarks, we are sold.
We caught several bass in the middle of bushes, over logs and around some real gnarly grass without any mishaps.
Our Thoughts
This is not line for anglers on a tight budget, but rest assured that  if you want the best, it is the line for you. We spend all kinds of money on rod, reels and baits then scrimp on line. It doesn’t make sense. We feel this line will last too. Because of the toughness and spoolability factors, we won’t have to change it as much, and it ultimately can cut some of the cost factors out of the equation.
We recommend Seaguar TATSU as a premium fluorocarbon purchase and one that die-hards will love.
To buy TATSU click here.
Next
Contact Us