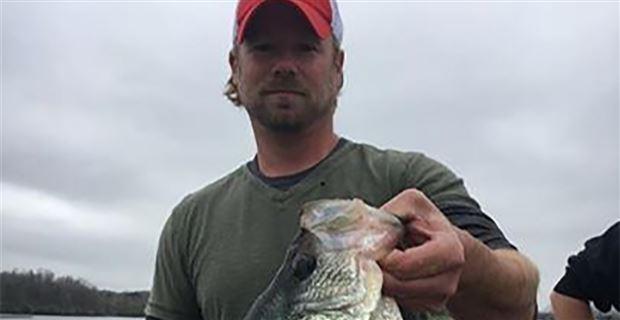 UPDATE (4/19/17): Illinois DNR Fisheries Chief Dan Stephenson has confirmed that the crappie is actually a hybrid. The following is an email from Stephenson after he received the results from a lab:

“We have confirmation from two geneticists that the new state record crappie is a hybrid. The parents were male white and female black. I received word late yesterday and informed the angler, Mr. Ryan Povolish. The fish has the appearance of a pure black crappie but that’s why we do the testing. Testing included both nuclear DNA and mitochondrial DNA.”

The crappie is still considered a state record.

When Ryan Povolish went crappie fishing with his friend Josh Jackson on Kinkaid Lake, he expected to have a fun day on the water. Little did he know, however, he’d lay into a pending state-record crappie that would make even the most seasoned angler a bit envious.

The friends began the day catching a few crappie out of a brush pile. They also had a few rods rigged for bass fishing, so they eventually meandered down the bank roughly 30 yards from their crappie hole and Povolish decided to make a few casts with a bluegill-colored 1/2-ounce Strike King Pure Poison Swim Jig with a green pumpkin-colored Rage Craw. 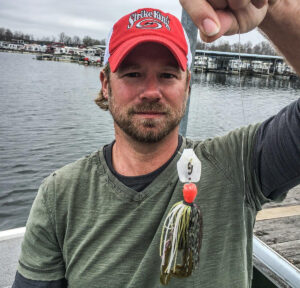 After making a cast towards the edge of a grass line, he got a big bite. It was fighting hard, so he figured it was one of the quality bass for which Kinkaid Lake is known. As it got closer to the boat, however, Josh Jackson knew it was a once-in-a-lifetime crappie.

Immediately after landing the fish, the anglers called Jackson’s tournament partner, Luke Estel and fisheries biologist Shawn Hirst to share the news. The proper steps were taken to document the fish’s measurements and upon the expected confirmation, it will become the new Illinois state record. 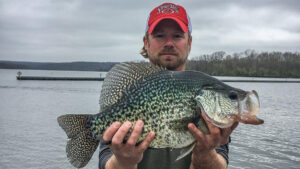 The fish is still alive and is being held in a live release tank. Josh Jackson converted an old deep freeze with copper pipes—originally meant to hold minnows—but it’s now the temporary home for the record crappie. The anglers are working closely with DNR officials to safely and lawfully transport the fish to a Bass Pro Shops tank so the public can enjoy the fish. 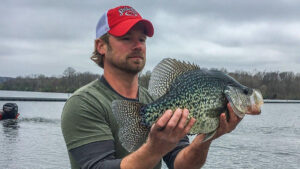 The anglers are keeping a constant eye on the fish and changing its water daily to ensure its well being. As of this morning, the crappie is said to be doing excellently and “looks like the lid of a 5-gallon bucket.”

I spoke with well-known bass angler Luke Estel, who is close friends with both Jackson and Povolish, and he shared some interesting insight into Kinkaid Lake’s history. 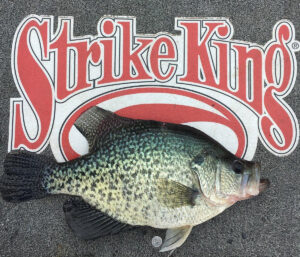 “Kinkaid is not the type of lake where you can go catch a bunch of 2 and 3-pound crappie,” Estel said. “But there are huge ones in there. About 15 or 20 years ago, they introduced muskies into the lake and all the bass and crappie anglers freaked out. We thought it would decimate the population. But as it turns out, those musky have helped control the population, which provides more forage for the surviving crappie and bass. You might not catch a bunch out there, but the ones you catch will likely be the right ones. Essentially, only the strong survive.” 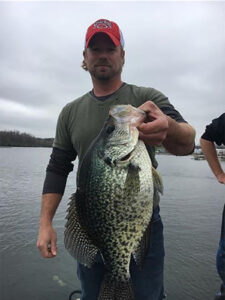