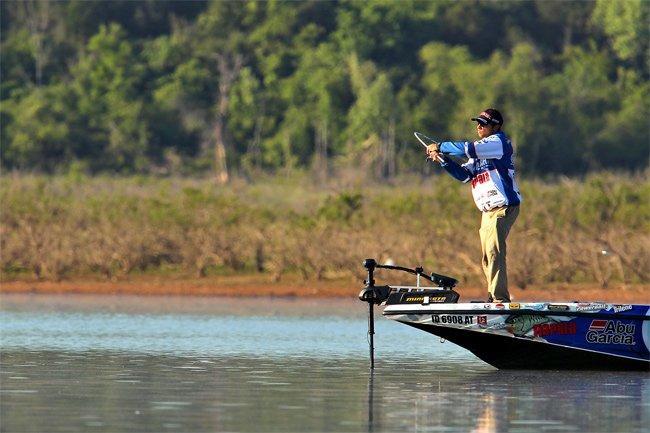 From the get-go of the recent Bassmaster Elite Series TroKar Quest at Bull Shoals Lake, Arkansas, Brandon Palaniuk had the big bass bite dialed in on deep rock and brush on a roadbed in the back of a spawning pocket.

But at the end of his 21-9 first day, Palaniuk only had one magic crankbait left. And he knew that fishing brush and rock would eventually kidnap his solitary breadwinner, a deep-diving crank personally tattooed by competitor (and bass fishing rockstar) Mike Iaconelli.

â€œI only had one Rapala DT 16 in Blue Back Herringâ€”the magic bait. So I went up to Ike and asked him if he had any DT 16s in Ike’s Custom Colors. He said â€˜yeah man, whatever you need’ and so I went through them and said, â€˜I’ll take this one and that one’ and he smiled and said â€˜take â€˜em and good luck’.â€

The irony, of course, is that Palaniuk won the tournament on Ike’s Custom Ink DT Series, while the Man himself didn’t fare nearly as well.

â€œI caught almost every fishâ€”definitely the toadsâ€”on the DT 16s I stole from Ike,â€ says Palaniuk.

The water had dropped almost eight feet in the two weeks prior to the event and during the tournament Palaniuk experienced a typical Arkansas spring scenario where the weather would make a 180 each day, the kind of situation that separates men from boys.

â€œDay one was decent but later in the day a cold front blew in and the second day was cloudy, rainy and got even colder. And then the third day we woke up to 38 degrees air temperatures with bluebird skies,â€ says Palaniuk.

This weather definitely made fishing difficult for anglers, but Palaniuk had confidence on his side.

â€œHands down, the Ike Custom Ink Colors in the Rapala DT Series are my tournament confidence baits,â€ says Palaniuk. â€œWhen you pick up a bait and you just know it’s going to catch fish, that’s huge, especially during cold fronts or whatever Mother Nature throws at you, like what just happened. There’s definitely something to these finishes that gets fish to bite no matter what kind of weather you’re faced with.â€

For Palaniuk, that means a few key finishes: Blue Back Herring, Old School and Smash, and Firetiger finish in the original DT Series.

â€œThe colors in the Ike’s Ink Series are muted like the subdued and camouflaged appearance of real baitfish, yet they have a glimmer that mimics real baitfishâ€”like pixie dust for big bass,â€ says Palaniuk.

At the end of the day, he credits Ike, Rapala and particularly the Blue Back Herring finish with putting him $100,000 into the black.

â€œThe water was dirty and the Blue Back Herring had a glow to it that just perfectly matched the shad they were feeding on in the ditches and on that deeper structure,â€ says Palaniuk. â€œYou know you have the right color tied on when you catch a fish and he’s closed his mouth and you can’t see the bait!â€

At the end of the day, numbers speak for themselves. On day one Palaniuk led the nearest competitor by a whopping 12 pounds, 13 ounces, day two he weighed 24-4 and day three his average still topped three pounds a fish for 19-10. His overall weight was a massive 78 pounds, 6 ounces, and exceeded the second spot by over 10 pounds.

â€œI feel like I can go anywhere in the country and catch fish on Rapala DT,â€ says Palaniuk.   â€œThe DT-16 was just the perfect size bait for the depths I was fishing on Bull Shoals. It stayed in the strike zone longer than anything else and allowed me to pluck those females off isolated pieces of structure.â€

To date, Palaniuk estimates he has won over $140,000 on Rapala DTs. And the kicker? The 24-year-old only started fishing professionally last year.