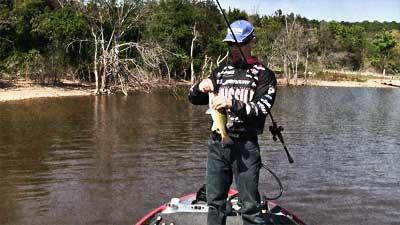 Video Transcript: (Laughs)  You see that sucker, chunky little spotted bass. He was up there around that shallow bush got himself some of that D-Bomb action. Little butter ball, let’s let him make some baby’s. Everything I’ve done I kind of evaluate everything as I go and flipping is no different. The one biggest key to flipping I think is turning your wrist over and turning the reel sideways and the rod sideways when you make your flip. There’s a couple reasons; number one when people leave their reel up like this your hand does not move in this motion very well it’s not a natural range of motion. If you turn your hand over that’s a natural range of motion for your wrist. Flipping and pitching is all in the wrist, its none of this you don’t push the rod out there you just flip it out with your wrist and if you turn that rod over it makes it a lot easier.  Plus sometimes that will get caught on your guides at the end and if you turn it sideways as you flip it will untangle itself and you won’t even have to fool with it. So it’s kind of multiple reasons that it helps work. If you’re fishing real close you don’t really have to get enough force to turn it over. But if you’re making longer pitches you absolutely have to turn it over. Flipping same way, you can flip and when you turn it over the line doesn’t get hung on anything as if you keep it up like that.