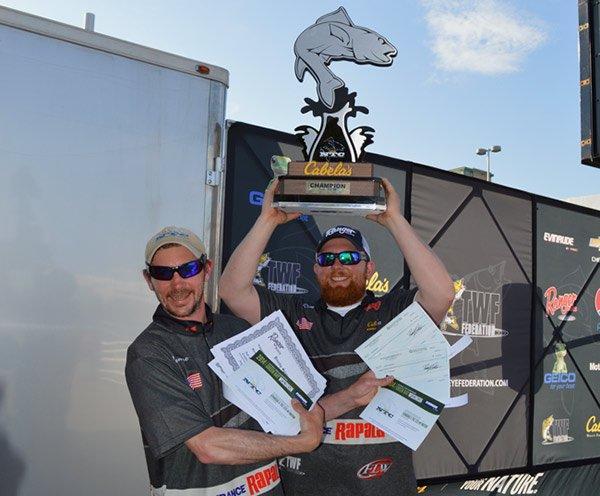 â€œThis is unbelievable,â€ Tourangeau, of Escanaba, said while clutching the coveted Cabela’s NTC trophy seconds after claiming the crown in front of a cheering crowd gathered in the shadows of Green Bay’s legendary Lambeau Field. â€œWe were so far behind, we thought we were fishing for second place.â€

A three-day event held May 29-31, the Cabela’s NTC is widely regarded as the pinnacle of grassroots walleye tournaments. It is comprised of two-person teams that qualified through competition in local tournaments organized by walleye clubs sanctioned by The Walleye Federation.

During the first two days of competition, the full field of 237 teams from 20 states and provinces across North America battled on the walleye-rich waters of Green Bay and the Fox River. Each team was allowed to bring their best five fish to the scale each day. Competition was fierce, as only the top 25 teams advanced to the final round on day three.

Neubauer and Tourangeau, who qualified through the Great Lakes Sport Fishermen club out of Escanaba, sacked a respectable 31 pounds, 3 ounces on day one and 29 pounds, 9 ounces on day two to enter the final round in second place with 60 pounds, 12 ounces. They trailed Wisconsin’s Adam Adler, of Oconto Falls, and Ryan Dempsey, of Oneida, who had a commanding lead with 70 pounds, 6 ounces.

â€œWe stuck to our game plan,â€ said Neubauer, of Iron Mountain, explaining that he and Tourangeau trolled gold-colored crankbaits behind planer boards to target walleyes suspended around 15 feet down over deeper water off a sand point between Peshtigo and Sturgeon Bay.

Weighing in ahead of the leaders, Neubauer and Tourangeau brought a 28-pound, 13-ounce five-fish limit to the scale for an 89-pound, 9-ounce total weight. As Adler and Dempsey took the stage with a limit of their own, the walleye world collectively held its breath. Adler and Dempsey needed 19 pounds, 3 ounces for the win. And considering they had brought in baskets weighing more than 30 pounds apiece to the scale on both days one and twoâ€”and led the field the entire tournamentâ€”the odds of victory were definitely in their favor.

But this day would be different. Adler and Dempsey’s final weight tallied 18 pounds, 13 ounces for an 89-pound, 3-ounce totalâ€”leaving them just six ounces short of claiming the championship. â€œToday we played it safe and it cost us,â€ said Dempsey.

Neubauer and Tourangeau were stunned. Besides ultimate bragging rights in the walleye world, they claimed the $30,000 first-place cash prize, along with a $60,000 Evinrude E-Tec powered 620 Ranger boat. They also won a second Ranger and E-Tec combo through the Ranger Cup contingency program, pushing their total winnings over $150,000.

In all, the Cabela’s NTC paid out $121,000 in cash to the top 50 teams and $14,600 in Cabela’s gift cards to the remainder of the field. In addition, the top 25 teams earned the title of â€œCabela’s All-Americansâ€ and received commemorative rings marking their achievement.

Another $1,000 in Cabela’s gift cards was awarded for big-fish and big-basket honors. On day one the Chevrolet Big Basket Award went to Adler and Dempsey for their 39-pound, 8-ounce bag. They also pocketed the Evinrude Big Fish Award for the 9-pound, 3-ounce trophy that anchored the impressive weight. On day two, the Ranger Boats Big Basket Award went to Wisconsin’s Kevin Adams, of Shawano, and Pat Schuette, of Manitowoc, for their 31-pound, 1-ounce catch. Day two Pepsi Big Fish honors went to Wisconsin’s Phillip Weigel, of West Salem, and Adam Woodhouse, of Stoddard, for the 10-pound, 3-ounce beauty that ended up big fish of the event.

A total of 1,969 fish weighing 7,221 pounds, 2 ounces crossed the stage during the three-day Cabela’s NTC event, of which the vast majority were released alive back into the Green Bay system.