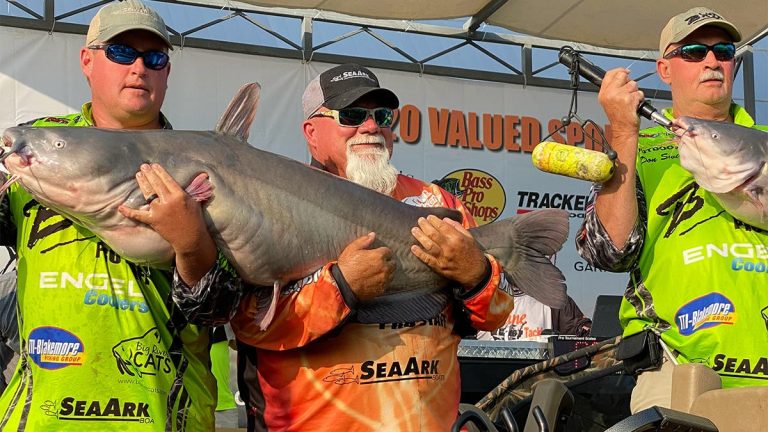 Along the Mississippi River, there are few regions like the Memphis area that produce giant size catfish. As the story goes, Memphis’s own Bass Pro Shop’s Pyramid was decided on a catfishing trip that included Bass Pro’s founder and owner Johnny Morris and the legend himself, Bill Dance.

Shadowed only by the glimmering Bass Pro Pyramid, the country’s premier catfish tournament event, Mississippi River Monsters, will for its sixth year be taking place September 15th through the final tournament day on the 18th. Some of the best catfish anglers from around the country, including Memphis’s own Bill Dance and Duck Dynasty’s John Godwin will be competing along with hundreds of others for thousands in cash and prizes, a new Tracker Boat, and the title of champion!

Each day of the Mississippi River Monsters event offers anglers and spectators a host of activities. The 15th and 16th, anglers that are pre-fishing for the event compete for the biggest fish and a chance to win cash and prizes. On Friday the 17th, the Bass Pro Shop’s Pyramid will host a full afternoon of seminars, where some of the best catfishing experts will provide tips and techniques every angler that enjoys the sport of fishing will want to hear about.  On Saturday, September 18th, it’s on! Competing anglers will be fishing up and down the Mississippi River for huge catfish, with weigh-in starting at 3PM in the front of the Pyramid.

George Young, Jr., The Mississippi River Monsters tournament creator and director stated “We are very excited for this year’s event.  With members of the Tennessee Wildlife Resources Agency, including Director Bobby Wilson, along with distinguished Commission members being in attendance, we wanted this year to be extra special. Together, Mississippi River Monsters along with Bill Dance Outdoors, Bass Pro Shops and The American Catfishing Association, we will be awarding the Tennessee Wildlife Resources Agency and its dedicated director, Mr. Bobby Wilson with awards of appreciation.”