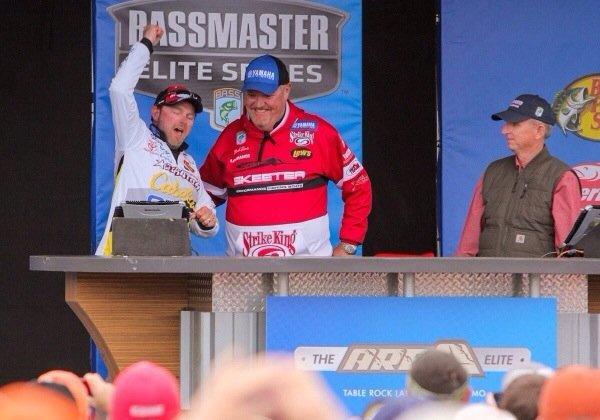 Mike McClelland of Bella Vista, Ark., added a seventh Bassmaster title by a nail-biting 13 ounces over Mark Davis in Sunday’s final round of the A.R.E. Truck Caps Bassmaster Elite at Table Rock Lake.

â€œThis is where I cut my teeth fishing,â€ said McClelland, now with four victories in his Bassmaster Elite Series career. â€œI’ve never had the opportunity to win a big one here before.â€

To do it, McClelland sacked 61 pounds, 15 ounces of bass. His prize was $100,000 and an instant-in for the 2015 Bassmaster Classic, his 10th qualification for the world championship.

McClelland broke a six-year winner’s drought. His most recent victory before Sunday was in March 2008 on Florida’s Harris Chain of Lakes, when he added a sixth Bassmaster event title to his record. That was the end of a streak he had going from 2005 to 2008, with a win in each of those seasons.

â€œI seem to go in these spurts where I win a few, then I go years without winning one, and it really can get under your skin,â€ he said. â€œTo win at Table Rock in front of all my friends and family and people who have supported me through the years is a phenomenal feeling.â€

â€œAnd I just realized I’ve got a berth for the Bassmaster Classic. That’s an awesome feeling,â€ said McClelland, who missed out on the 2014 event last February.

McClelland said that â€œfishing by the seat of my pantsâ€ was one key to winning.

â€œI didn’t try to slow down and finesse fish into biting. I chased the wind,â€ he said. â€œOn this clear lake, you always have to look for at least a little ripple.â€

McClelland said he’s been fishing Table Rock since he was 8 years old. What he learned over the years helped him considerably in the Elite event. He knows the lake so well, he was able run his primary pattern through areas he had not tried out during the three-day practice.

And that pattern was fishing windy, rocky banks close to channel swings in creeks or main-lake pockets.

â€œThis time of year, these fish want to be on the biggest, gnarliest rocks,â€ he said. â€œSome people get frustrated trying to fish that stuff, but it was key for me.â€

He used his HeHsignature series stickbaits made by Spro, a McStick 110, mostly in a natural herring color, and a McStick 115 in clear chartreuse for shallower presentations.

When the water surface became slick because the wind died, he turned to a 4-inch paddletail swimbait near docks or over brush.

And the original Storm Wiggle Wart, which he’s had in his tackle war chest for years, played a role, too. The wide-wobbling crankbait clued him into one significant move he made on the second day. After the Wart was getting bites in shallower water, McClelland decided to run to a brushpile he knew of and use the McStick 115. The result was a 3 1/2-pound bass.

â€œYou look at little keys like that over the course of the week, and they add up,â€ McClelland said.

Davis, whose four-day total was 61-2 for second place, made a heroic effort to make up the 4-6 McClelland had on him. Starting the final day in fourth place, Davis not only had to try to overtake McClelland, but also Aaron Martens and Kevin VanDam. While Davis’ 15-11 weight on Sunday was close to being enough, it couldn’t make up for Saturday’s stumble, when he weighed 11-12.

â€œI knew I blew it yesterday,â€ said Davis, who had led the 108-man field on Friday. â€œDid I do anything wrong? No. I caught lots of fish; I stayed on fish all four days. When it comes down to less than a pound like that, it just wasn’t meant to be.â€

Davis spoke longingly of a few good-sized bass he hooked on a crankbait Sunday, but they threw it.

His consolation prize for a loss by 13 ounces was retaining the early lead in the Toyota Bassmaster Angler of the Year race. After Table Rock, Davis had 35 AOY points on Jared Lintner of Arroyo Grande, Calif.

An early lead is nice, he said but no guarantee.

â€œI know how AOY goes. You can have one bad day, one bad event. It’s not three strikes you’re out; it’s one strike you’re out,â€ Davis said. â€œHappy to lead? Yes. But I know what can happen.â€

Finishing in third place with a 60-15 total â€” just 1 pound behind McClelland â€” was Greg Hackney of Gonzales, La. Fourth place was claimed by first-day leader and the reigning AOY, Aaron Martens of Leeds, Ala., who tallied 60-1. Kevin VanDam of Kalamazoo, Mich., finished fifth at 59-15.

The Rookie of the Year Award leader after Table Rock, the third of eight regular-season events, was Jacob Powroznik of Port Haywood, Va. He has 227 points over the 222 earned by Chad Morgenthaler of Coulterville, Ill.

Bonuses that Elite pros earned at the Table Rock event were:

* Toyota Bonus Bucks award of $2,000 to the second-highest eligible finisher: Edwin Evers of Talala, Okla., who finished at Table Rock in sixth place.

* Toyota Bassmaster Angler of the Year Bonus of $1,000 to the leader in the Elite Series points race: Mark Davis.

* Carhartt Big Bass of the tournament worth $1,000 plus another $500 for wearing Carhartt apparel: Aaron Martens for his 8-0 of Day 1.

* Livingston Lures Leader Award of $500 for heading up the leaderboard on the second day: Davis.

* The Rigid Industries Jackpot was not claimed at the Table Rock event. A daily prize of $250 is offered for a 25-pound or heavier bag. The accumulated jackpot is now $1,500; that amount rolls over into the next tournament day of the Elite Series.

ESPN2 will air coverage of the Table Rock event on The Bassmasters TV show Sunday, April 20 at 8 a.m. ET.