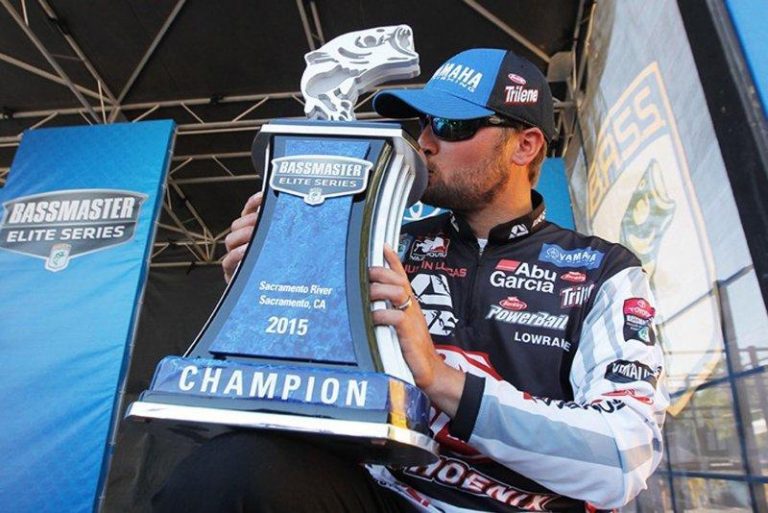 At just 28 years of age, it’s hard to imagine Justin Lucas has accomplished all he’s going to in professional bass fishing.

But wherever he goes from here, it’ll be hard for him to top what he experienced the past four days in the Sacramento Bassmaster Elite at Sacramento River.

With a giant cheering section full of friends, family and fans holding signs that read “Go Justin” and “Cal-A-Bama Kid,” the California native turned Alabama resident brought a limit of bass that weighed 16 pounds to Sunday’s championship weigh-in. It pushed his four-day mark to 82-14 and helped him claim his first career B.A.S.S. victory, under the best possible circumstances.

“This one’s perfect,” a teary-eyed Lucas said after claiming the $100,000 victory in just his 23rd career B.A.S.S. event. “For about 17 years, I’ve been dreaming of doing something like this. It’s cool. It’s just super-cool.”

Lucas began the week in eighth place with a solid catch of 21-13 Thursday. Then he bullied his way up to third with 25-14 Friday and took the lead with 19-3 during a Saturday round when difficult tidal conditions baffled much of the field.

He made at least a 90-minute run down the Sacramento River to the California Delta each of the first three days and targeted shallow largemouth with a Berkley Havoc Pit Boss in the vampire orange color pattern. He stayed with the same approach Sunday, but made an even longer run to an area he’d been holding in reserve.

“I saved that area,” Lucas said. “I knew it was going to get tougher every day. We had some other tournaments going down there, and there was a lot of pressure. I saved that area, and nobody else really knew about it.”

He said it wasn’t the type of area where an angler would normally win an event on the California Delta. But it was just what he needed on a day when many of the remaining Top 12 anglers struggled.

Five-foot waves almost convinced him not to make the journey. But he made the decision to tackle the rough water, and he put together a fast limit that he culled to upgrade before making the long journey back to Discovery Park.

“I knew there were a lot of 3-pound fish in there,” Lucas said. “That’s what I had today. I had 16 pounds, so I basically caught five 3-pound fish. I kept that area in my back pocket, and it worked out.”

Lucas caught most of his fish sight fishing for bedding bass and flipping the shallow vegetation that blankets the shoreline of the Delta. He said he’s never thought of himself as an angler who is good at flipping, but his willingness to stick with the tactic helped him to the gigantic career milestone.

His closest competition came from another California native turned Alabama resident, two-time Toyota Bassmaster Angler of the Year Aaron Martens. After leading the tournament on Day 2 and entering the championship round in second, Martens caught 16-9 Sunday and finished almost 2 1/2 pounds behind Lucas with 80-7.

“I’ve known Justin for a long time,” said Martens, who finished second for the 13th time in his B.A.S.S. career. “I’ve talked with Justin a lot, and he’s a super-cool guy. I wanted to win, but I’ll take second.”

Lucas was overcome with emotion again when he thought about the list of anglers he held off to get the win.

“Every day that I go fishing, I don’t think that I’m that good of a fisherman,” Lucas said. “I don’t think I’m good hardly at all. I think that just makes me, every single day that I go, try and keep working as hard as I can all the time. There are a lot of other guys on this tour who are way better than me.”

The Elite Series field will now travel nine hours to Havasu City, Ariz., for the Bassmaster Elite at Lake Havasu presented by Dick Cepek Tires & Wheels. While he wished he had more time to stay and celebrate with family and friends in California, Lucas said he’s excited to try and keep his momentum churning on another lake where he’s spent a lot of time.

“It’s bad that I have to leave my family and friends, and good because I want to try to keep it rolling,” said Lucas, who currently ranks second behind Rojas in the Toyota Bassmaster Angler of the Year race. “But even if I finish last at the next one, I don’t care. I’ll always have this.”