A meet-and-greet with refreshments starts the activities at 1:30 p.m., remarks from Lew’s officials and guests begin at 2 p.m., and the ribbon-cutting ceremony follows at 2:30 p.m. The museum opens to tours afterwards, closing at 6 p.m. 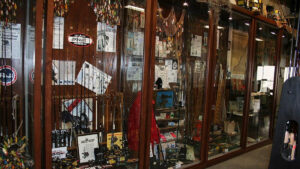 The 1,000 sq. ft. museum was incorporated into the original design of the new Lew’s building and it has been under development since the fishing tackle company occupied the facility last September. Approximately half of the museum is dedicated to the history of Lew’s, with the balance of the space used to house a variety of other collections significant to the region, including the J.D. Fletcher White River collection.

“Lew Childre introduced a lot of industry ‘firsts’ from the 1950s to the 1980s, many of which are still used in today’s fishing gear. The man and his innovations deserve a place of preservation in fishing’s history,” said Lew’s CEO Lynn Reeves.  “We have the BB1 serial #2 Speed Spool reel here, along with many of Childre’s earliest prototypes that I believe folks will find highly interesting whether they fish or don’t. These are things the public need to see and we’re pleased to make that possible.”

Many of the Lew’s items have come from Reeves personal collecting efforts, while the rest has come either through company purchases or donations by individuals.

Reeves said among the most prized possessions are one of the Lew’s gold rings that Childre used to recognize special friends and achievements, the original pistol grip rod handles that Childre’s fishing buddy Shag Shahid hand-carved from wood and that ultimately led to Lew’s Speed Sticks being the country’s best-selling bass rods in the 1970s and some vintage movie footage of Lew Childre fishing. 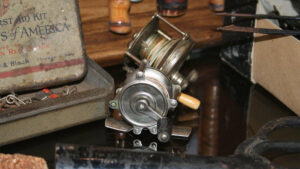 The J.D. Fletcher White River collection consists of more than 5,000 lures, a variety of other antique fishing items and scores of old photos relevant to the late Fletcher’s long history of guiding in and around the Table Rock Lake and White River area.

Additional collections include an on-loan assortment of Clark’s Water Scout baits that were originally made in Springfield by the C.A. Clark Mfg. Co., and also a display of spinnerbaits from Springfield’s old 3 J Bait Company.

Among the most prominent museum items by size are a float boat typical of the ones once common to the upper stretches of the White River, vintage outboard motors and trolling motors, and a 1975 Ranger bass boat.

“I’m actually quite impressed with the diversity of the items being showcased here because the scope goes well beyond just Lew’s,” said Lew’s President Gary Remensnyder. “This museum captures an era and region of equipment heritage that without a doubt played a critical role in the development of today’s tackle. These items have rightly earned their place in fishing’s history.”

“I want to say a big thank you to Barb Matthews for her creative touch and dedication to helping make the Lew’s Ozarks Fishing Museum something special; she’s done a wonderful job on it,” added Reeves.

The Lew’s Ozarks Fishing Museum is accessed through the adjacent Sportsman’s Factory Outlet store. Museum hours are the same as SFO’s, with both being open Monday thru Friday, 9 a.m. – 6 p.m., and on Saturdays from 9 a.m. until 3 p.m. Museum admission is free.