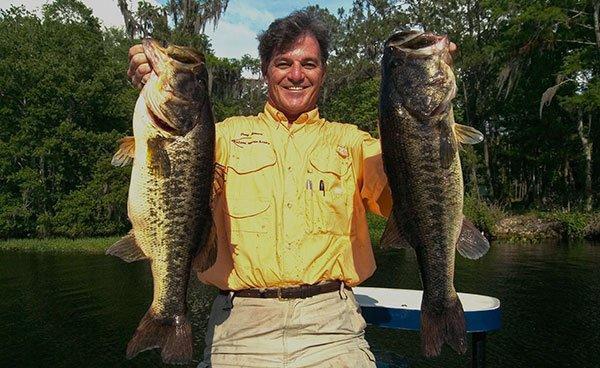 Doug Hannon, a legend in the fishing world known as the “Bass Professor” whose unique expertise in a wide range of design skills and academic subjects in and outside of angling, died Thursday at his home in Keystone, a north Tampa suburb.

“He recently had neck surgery and was recovering at home,” said friend Russ Riley, a family spokesman and president of WaveSpin/MicroWave, a fishing components design company Hannon launched eight years ago, and which he served as its chief engineer. It is believed that complications from this surgery led to his passing.

Hannon, who was best known by recreational anglers for catching-and-releasing over 800 largemouth bass of 10 or more pounds, also had nearly 20 patents for numerous fishing tackle, lures and boating propulsion designs.   After its launch last summer Hannon was again riding the crest of worldwide acclaim with his newest innovation the MicroWave Line Control System by American Tackle, introduced at fall and winter fishing and trade shows in Australia, Asia, and Europe and recently in North America.   A key component for light tackle spinning and casting rods called a guide train, Hannon’s new light weight advancement gives anglers longer and more accurate casts with far less vibration and friction to the line.

“He was deeply analytical and had an exceptional ability to visualize and solve complex issues, especially when it came to fishing tackle, lures and components geared to helping anglers enjoy the sport,” Riley said. “You could instantly see and feel his passion when he was showing anglers at fishing shows his engineering designs in use such as casting and catching fish. He absolutely loved the sport.”

Hannon had also recently re-invented the spinning reel naming his new advancement WaveSpin based on its “radical” wave spool design, the antithesis of the spinning reel’s smooth face fabrication found on all other reels for over 60 years. The reel was designed to eliminate birds’ nests.

With the growth and popularity of bass fishing, one of his earlier inventions introduced four decades ago was of the weedless trolling motor blade.   It allowed anglers to fish vast areas of previously inaccessible weed beds where bass live and is still used by millions of anglers today.   It also put him in the fishing world spotlight.

Hannon was hailed by Outdoor Life as one of the O.L. 25: people “whose lifetime achievement has had the greatest positive influence on hunting and fishing.”   In 2000 he was inducted into the Freshwater Fishing Hall of Fame in Hayward, Wisc.

“Doug was not only the brains behind so many designs, he was also the heart and soul,” said a saddened Riley. “Anglers found him to be very approachable.

“It will be extremely hard without him but Doug and his business partners mapped out great plans for the future of the company.   Doug laid the ground work for this company to continue on and be very successful, not only with his recent technology now on the market, but with several other designs in the wings,” said Riley.

Top angler and observer of nature

Besides his recent success as a fishing tackle and components inventor Hannon documented the catch-and-release of more than 800 largemouth bass weighing 10 pounds or greater to his credit, making him one of the country’s preeminent big-bass authorities. He was also a highly skilled diver, underwater photographer, author, filmmaker and lure designer.

The legendary angler and renowned bass fishing expert was one of the long time hosts on ESPN’s Sportsman’s Challenge TV series. He spoke and wrote about the battles to stop the irresponsible use of herbicides in the nation’s waterways.

As one of the world’s greatest authorities on bass fishing Hannon wrote hundreds of magazine and newspaper articles on his observations. He also penned three books, Hannon’s Field Guide for Bass Fishing, Catch Bass, and Big Bass Magic. He filmed and produced videos with 3M called Understanding Bass, Catching Big Bass, and Bass-Formula for Success, which among them won Cleo and Teddy awards.

He published the Hannon Moon Times nationally for TV, magazines, newspapers, and radio and an annual pocket guide for anglers called the Moon Clock now in its 32nd year.

Through his TV work and tips at fishing shows, Hannon gained a following of thousands of friends in the fishing community and often was called on to speak worldwide on his fishing knowledge.   He introduced tips to millions of anglers enriching their enjoyment of fishing, along with many celebrities among them the late General H. Norman Schwarzkopf who he taught how to fly fish for bass.

Born in Winnipeg, Manitoba in 1946 to a Canadian mother and a father from Texas, Hannon moved to the United States at the age of seven. He attended Governor Dummer Academy in South Byfield, Mass., and went onto Tulane University in New Orleans, La., to complete a B.A. degree. He was also an accomplished guitarist playing in rock and roll bands there, and developed a lifelong love for running.