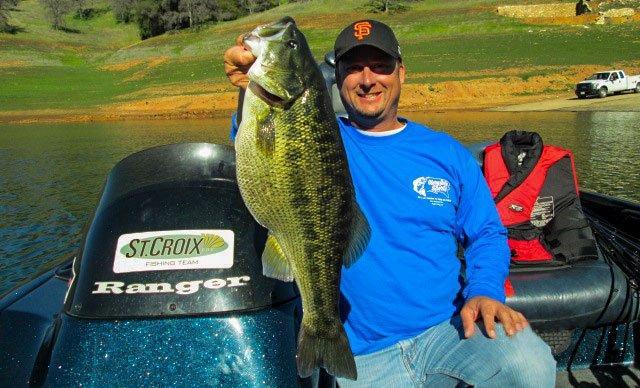 The bass fell for a River2Sea S-Waver 168 jointed hard swimbait in the Lite Trout pattern. Pierson and his father Glenn were practicing for an ABA tournament on the lake March 9. They were hitting points and stopped on a main lake point and here’s how Pierson said it all went down.

“There was a slight ripple on the water from a breath of air, so I reached down and picked up the 6-foot, 8-inch St. Croix Legend Extreme rod that I had my S-Waver on and made a cast toward the bank,” Pierson said. “I retrieved the S-Waver about 15 feet and the rod just loaded up, then the battle heated up.”

“I had caught a 7-pound, 11-ounce spot at Don Pedro in 2005; which was a lake record then, and I knew this was bigger,” he said. “We weighed this fish, and later found out it was a lake record. It was an unbelievable feeling and an incredible fish.”

A week later, during the tournament, the Piersons finished fourth with a limit of spotted bass for a total weight of 23.02 pounds, a creel that included an 8-pound, 5-ounce spotted bass that would have eclipsed the previous lake record, had he not done it a week earlier. For more details of the catch, and additional pictures, see the story by Jody Only on The Examiner.