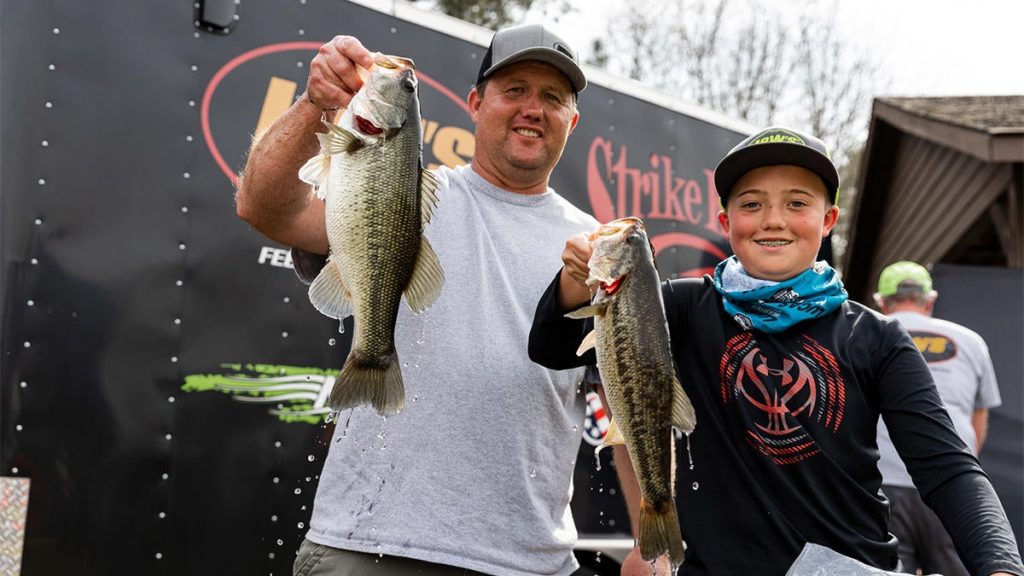 Just after dawn on Sunday, March 14th a field of 247 competitive tournament anglers launched on Lake Murray, just outside of the city of Columbia. The weather was stable and the wind calm. Water temperatures warmed to 60 degrees for the first time in the year. Throughout the day, an ideal scenario unfolded for Spring bass fishing on South Carolina’s renowned Murray, as Strike King launched its 2nd Big Bass Challenge of 2021.

Throughout four weigh periods of the tournament, anglers brought a number of four- and five-pound class largemouth to the scales. While a scattered few anglers fished deeper water near spawning grounds, the majority of the big fish were caught shallow. Alex Cooke won the day with a 5.97 lb. bass, caught on a Junebug colored finesse worm. It was a close finish, with Alex besting Austin Davis by just 0.03 lbs. Alex took home the grand prize of a “Total Boat Makeover Package” worth $5000 in Strike King and Lew’s product. Second, third, and fourth place finishers also took home coolers from Mammoth Coolers. Each period winner was awarded $1,500, with a total of $3,750 paid out each of the two-hour periods.

In addition to the Big Fish competition, all keeper-size bass weighed in were entered into a drawing for anglers to win prizes from Strike King, Lew’s, Black Rifle Coffee Co, Lucas Oil and Mammoth Coolers. Lexington, SC-based Lew’s also handed out new rods to the first 100 registered anglers.

While the fishing did not start until Sunday morning, Strike King treated anglers to a weekend of fun. On Saturday fans had the opportunity to meet two-time Bassmaster Classic Champion and Bass Fishing Hall of Famer Hank Parker. Hank spoke to an audience of fans and anglers on Saturday evening about the future of the sport of fishing, and the importance of encouraging the next generation of anglers. MLF angler and Strike King pro staffer Andy Montgomery was also on site for the tournament. Montgomery, whose family farm is just over 100 miles northwest of Lake Murray, feels at home on this 50,000-acre reservoir. The fan favorite spent time on Saturday with the anglers answering questions and comparing notes.

Jason McKee, Vice President of Marketing for Lew’s and Strike King’s parent company Rather Outdoors, noted that while a driving force behind Strike King is top tier competitive angling, the company is deeply committed to broadening participation in the sport. McKee said, “Our goal behind the Big Bass Challenge is to bring anglers together with a format that is available to anyone, regardless of experience. Ultimately, we want to share our passion for the sport with our consumers, get to know them, and present yet another opportunity for them to get on the water.”

Brett Collins, seasoned tournament manager and operator of Carolina Angler’s Team Trail (www.cattteamtrail.com) directed the weigh periods and assisted the Strike King team. Safety and sanitation for Lake Murray and all other events is provided by Mammoth PPE Products.

Anglers may register now for upcoming events at https://www.strikeking.com/big-bass-challenge, where they will also find rules and info sheets for each specific event.  The remaining 2021 Strike King Big Bass Challenge schedule is as follows: