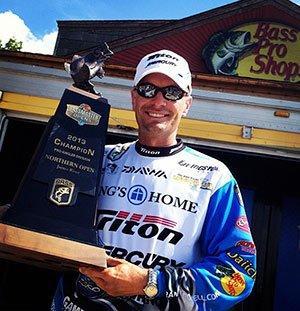 Randy Howell presented himself with the sweetest Father’s Day gift of all, albeit a day early. He caught 15 pounds, 4 ounces of bass today to overcome a Day 1 culling error and expand his narrow Day 2 lead from 1-4 to more than 6 pounds to win the 2013 Bass Pro Shops Bassmaster Northern Open on Virginia’s James River.

Along the way, he did his best to keep the local economy rolling. The nearby gas stations were certainly happy, as he drove his boat 40-plus miles to the top of the distant Chickahominy River tributary each day, as did many others. Once there, he caught 80 percent of his bass on a wacky rigged Yamamoto Senko soft stick worm. Unfortunately, he ran out of the lures mid-event and had to spend $100 at a local tackle store to restock.

Ultimately, though, it paid off when he weighed in three consecutive limits of more than 15 pounds, totaling 47-11 and beating runner-up Mike Hicks by 6 pounds, 1 ounce. Most significantly, as long as Howell fishes the remaining two Northern Opens scheduled for this year, he will have clinched a spot in next February’s Bassmaster Classic at Lake Guntersville, in his adopted home state of Alabama.

While Howell receives his mail in Alabama, this week he proved that you can go home again. He won within approximately a hundred miles of where he grew up, fishing familiar waters, in front of many members of his family. Indeed, even though the crowd for the final weigh-in at the Ashland, Va., Bass Pro Shops was large, it seemed that just about every other one of them was somehow related to the champ.

He caught most of his bass close to the Walker Dam, separating the upper end of the Chickahominy River from Chickahominy Lake.

â€œThat first day, my partner was throwing a Senko wacky style and I was throwing one on a drop shot,â€ Howell said. â€œWhen he caught a nice one behind me, I changed to a wacky rig, and that’s when I started catching better fish. Over the next couple of days, I fine-tuned my presentation, cut my weight down, and when I caught two 5-pounders back to back, I figured out the spot had the potential to win the tournament.â€

This marks Howell’s first Bassmaster victory since April 2004, when he won a reduced-field Elite 50 tournament on Lake Dardanelle in Arkansas. Since then, there have been several times that he’s led after a day or two of competition, but he’s never been able to close the deal. Last year, he led an Elite Series tournament at New York’s Oneida Lake after two days, but only weighed in four fish the last day and fell to Boyd Duckett by 6 ounces. Today, he had two fish over 4 pounds early in the morning, but when the bite slowed, he trusted his instincts in a way he had not at Oneida and it paid off.

â€œAt Oneida I had a gut feeling at 12 o’clock and I talked myself out of it,â€ he said. â€œI finally went there with 45 minutes left to go and caught some fish, but it was too late. I feel like if I had gone there when I first thought about it, I’d have won. Today I felt like I had to run back to a spot within a mile or two of the ramp, so I did it, and I culled two times. In the end, I didn’t need it, but I feel good about it and hope that momentum will stay with me the rest of the year.â€

After Thursday’s storms and Friday’s windy conditions, today there were bluebird skies and barely a lick of wind. That shut down the fishing for many of the remaining anglers. After multiple 16-pound bags were weighed in on Friday, no one other than Howell had more than 12-9 today.

Former tour-level pro Mike Hicks started the day in second place and held that position at the end of the day, although Howell’s big catch widened their gap. He weighed in three limits of Chickahominy River bass that totaled 41-10 to start off the Northern Opens in grand style.

He fished several creeks in the middle section of the Chickahominy, primarily with a black-and-blue Lil’ Hustler Swim Jig and a black Lobina Lures Rico. The key was his local understanding of the tides.

â€œThis is my old stomping grounds, and I know that the low tide concentrates the fish,â€ he said. â€œWhen the tide would get low, I’d fish up around channel swings up against the bank. The bigger fish were up against wood.â€

He certainly wanted to qualify for the Classic, as his father did years ago, but claimed he was satisfied with his result.

â€œTo get beat by Randy Howell, the most professional pro on the Elite Series circuit, it’s hard to have bad sentiment about that,â€ he stated.

Mike Iaconelli, who finished in the Top 12 here in 2011, once again demonstrated his exceptional understanding of tidal water, finishing third with 41-4. He claimed that he lost one or two fish each day that would have made a difference.

Local Kelly Pratt, who won here in 2011 and finished fourth last year, once again finished fourth. The biggest final day move came from New Jersey’s Pete Gluszek, who jumped from 12th to 6th on the strength of his 12-9 limit.

Nick Leonard of Cincinnati, Ohio, brought in a three-bass limit that weighed 5-13 to climb from second into first in the co-angler division. He credited pro partners Gluszek, Fletcher Shryock and Brandon Palaniuk, as well as an ability to adapt to the conditions, for his victory.

â€œI just tried to stay consistent,â€ he said. â€œI didn’t miss any fish all week, and I used different baits each day. I caught them on a topwater the first day, flipping the second day, and today I just went junk fishing. I caught most of them today on a Senko.â€

Leonard will take home a Triton 17 Pro, powered by a Yamaha F115LA and equipped with a single axle trailer, MotorGuide trolling motor, Lowrance HDS-5 Gen 2 electronics and a Tempest propeller.

The Carhartt Big Bass award of $500 for the largest single bass caught at the tournament was awarded to Tracy Adams of North Carolina on the pro side for the 6-13 largemouth he caught on Day 2. Phillip Adams of Virginia won the award on the co-angler side with a 6-1 bass, also caught on Day 2.

The Luck-E-Strike Heavyweight Award on the pro side, consisting of a $250 Bass Pro Shops gift card, will be split among Howell, Hicks and Greg Cooper, each of whom caught a limit that weighed 16-12 on Day 2. On the co-angler side, Kelly Robinette will have the gift card all to himself. He caught three fish that weighed 10-3 on the first day of competition, and that held up as the biggest co-angler bag over the next two days.

The Livingston Lures Leader award of $250 was presented to Randy Howell for leading the pro side after Day 2 of competition. Cody Andrews of North Carolina won the corresponding honor on the co-angler side and received a Livingston Lures gift pack valued at $250.