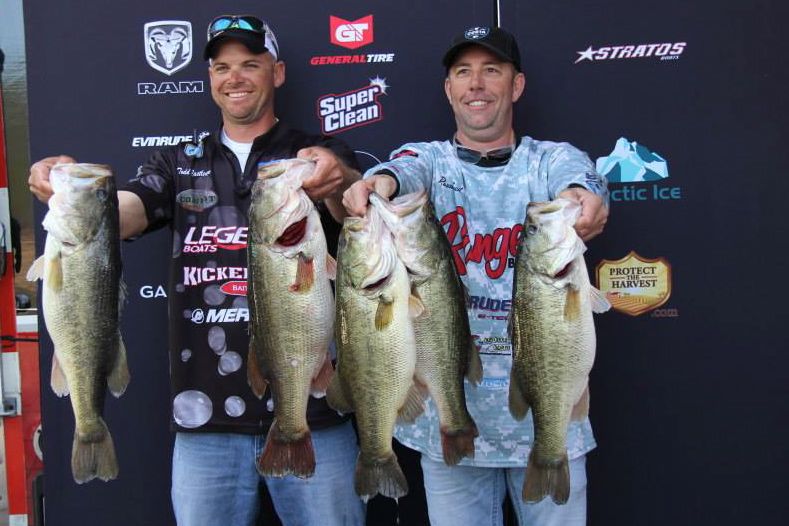 The TXTT veterans added another trophy to their case that already includes the 2012 TXTT Team of the Year. Taking advantage of the warm water, the anglers hit the entire lake.

“We burned 40 gallons of gas,” said Cecil. “It was an unbelievable day. The warmer weather made the fishing much better. We are excited to win a boat and look forward to the next TXTT event.”

The team threw crankbaits, jigs and rattletraps to outside edges of grass to catch their winning limit. Adding $2,505 in Angler Advantage cash brought the team’s total winnings to $48,505.

“The warm weather pushed the fish to the grass lines,” said Jones. “We ran up the lake for a total of 25 miles, throwing rattle baits and suspended jerkbaits on the outside of grass lines. Considering we had a slow practice, we are very proud of our performance.”

Stephen Johnston, of Hemphill, Texas, and Dicky Newberry, of Houston, Texas, have fished tournaments for over 25 years. The team brought in 26.47 pounds of bass with rattletraps, crankbaits and swim jigs in the shallows.

Despite reporting slow fishing action, the anglers added $1,837 in Anglers Advantage Cash, a $250 boat bonus and the $1,250 Big Bass Award for their 9.76-pound lunker.

The next stop for the Texas Team Trail is Ray Roberts Lake on March 15. Competitors who register for the ray Roberts Lake event by midnight of Thursday, March 13, will be allowed to pre-fish on Friday, March 14, and entered into a drawing for a free Minn Kota Talon shallow water anchor.

For additional information, anglers are encouraged to call 210-788-4143 or check out the TXTT website at www.texasteamtrail.com. Site visitors can register for events, review the television schedule, get official Texas Team Trail gear, view results and learn more about what’s in store for 2014.